Koko Be Good: No, not the gorilla

Elsewhere:  I wrote about this season's first two episodes of Fringe over at The Factual Opinion.  It looks like that show and I are stuck with each other.

It looks like Lucy Knisley is doing a series of prints that sum up the Harry Potter movies in comics format.  I love her work; this is really cute stuff.

And hey, USA Today has a new Hellboy comic written and drawn by Mike Mignola; how about that?

Koko Be Good
By Jen Wang

It’s about time comics had its own Manic Pixie Dream Girl, isn’t it?  For those who don’t know, that term was invented by the film critic Nathan Rabin to describe the sort of flighty, irresistible romantic interest, such as Natalie Portman’s character in Garden State, a person who might seem to be a lot of fun in a fictional context, but would probably become insufferable in real life.  That certainly seems to describe the titular character that Jen Wang has created here (with the romantic angle deemphasized, however), although she comes at it with a knowing eye, with the character being enjoyable to watch as she bounces from scene to scene with lively energy, but actually alienating everyone around her with her antics.  It ends up being an interesting examination of the character, what makes her tick, and how she relates to others, placing her in a realistic world and allowing her exaggerated nature to push against its boundaries.
Wang’s take on Koko is enticing, detailing just enough background detail to hint at what might have made her the way she is: she’s near-homeless, so she often gets by through mooching and stealing, and then covers up for her behavior through being entertainingly loud and obnoxious.  A meeting with the book’s other lead, a young man named Jon who is pining after his older girlfriend and planning to move with her to Peru, inspires her to change her ways and, as the title indicates, “be good”.  What that means exactly is something she spends the book working out, and it’s fascinating to see how she approaches it, attempting approaches as varied as donating to charity, volunteering, and even selling all her possessions, often unsure whether she is doing the right thing, making any difference, or just fooling herself.  It’s a mature bit of storytelling on Wang’s part, refusing to supply easy answers or cheap sentiment, and building to an emotional crescendo that, even though it is cribbed from the Jack Nicholson movie About Schmidt, is no less effective in its punch to the gut.
It’s a lively tale, full of antics and personality, and some lovely artwork.  Wang’s fluid style is gorgeous to behold, grounding cartoony characters in a realistic environment, which, while it is never named, appears to be San Francisco.  Watercolored browns and greens give everything an earthy tone, situating the story squarely in the real world and keeping the goofy antics from getting too bright and cheery; there’s a somber tone underlying the comedy, a sad disconnectedness that makes the not-exactly-worldshaking conflict about finding oneself some weight.
As for those characters, they’re a marvel of design, especially Koko herself, who, with her round face, big eyes, high forehead, and wide mouth, wears a succession of exaggerated expressions that make her immediately endearing, the kind of person who has no filter for their entertainingly frank thoughts, yet is charming enough to make that obnoxiousness funny rather than mean (at least at first).  There’s a brightness and excitement to her face, but also an edge, a sense that she can turn at a moment’s notice toward spite, anger, and derision.  But, since she’s trying to change her ways and be a good person, Wang ably depicts her struggling with herself, warring against her nature and trying to act differently from the person she has trained herself to be.  It’s a complex characterization, and fascinating to watch. 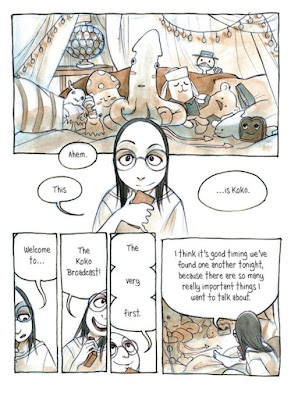 The book as a whole is not quite perfect, with a subplot involving Koko’s teenage acquaintance (and sometimes accomplice) Faron never really given the space it deserves; his home life, with his activist sister, her derisive boyfriend, and his hidden love of musical theater, suggests an interesting story in itself, but it doesn’t get enough space, and it doesn’t seem to fit in with the A-plot’s theme of self-betterment.  It’s still a nice bit of writing and characterization on Wang’s part, as is Jon’s enthusiasm about his girlfriend and their upcoming adventure, which seems to be slowly and sadly crowding out the hopes and dreams he had before he met her.  Wang’s characters are full and rounded, and if anything, we want to spend more time with them than the meager moments the book gives us.
This is a hell of a debut, an excellent work by an artist who, with her first full-length story, announces herself as a major talent and a huge rising star.  This doesn’t seem like the work of a beginner; its solidity and dimensionality, in both its art and storytelling, is impressively mature.  Hopefully, Wang will have a long and fruitful career, gifting readers with characters like this, that we want to spend as much time with as possible.
Posted by Unknown at 10:52 PM