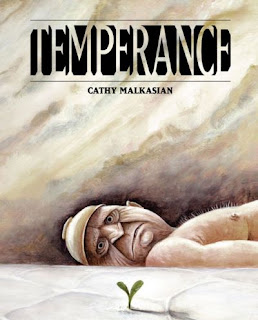 It's hard to figure out how to approach this book, because it's an intimidatingly rich work, full of symbolism and moody art, but put together in such a way that interpretation could take in any number of directions.  Cathy Malkasian doesn't do a lot of hand-holding here, just plopping readers down among some strange, slightly fantastical characters and letting us catch up.  And she doesn't sit still either, racing forward in a plot that involves closed-off societies, beliefs influenced by lies, mystically-powered (and possibly fictional) characters, and what appears to be a conflict between knowledge and faith.  It's all lushly rendered in spooky gray tones, with lively, somewhat pudgy characters always striving forward toward their dubious goals, so even if it seems hard to understand, it sure looks beautiful.

Ah, but that story: it's divided into three parts, with each section marking a striking shift in the direction of the plot.  The first seems like an intimate character piece, with a violent, seemingly insane (adoptive?) father abusing his "daughters" as he speaks of building a huge "ship" out of stone, where they can be protected from some undefined enemy.  The two girls argue about the rightness of his actions, with short, chubby Minerva defending Pa (the only name by which he is known throughout the book) and the taller, prettier Peggy accusing him of kidnapping them, making up his "enemy", and generally causing chaos and committing unspeakable deeds.  When Pa tries to rape Peggy, a nearby young man comes to her defense and is savagely beaten by Pa as Peggy runs away, but Minerva manages to convince Pa to spare his life. 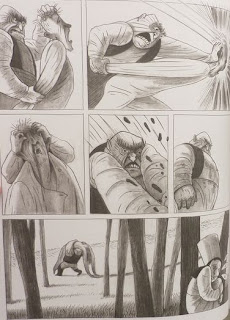 This all seems to be setup for the second part, and the real centerpiece of the book.  Jumping forward a few decades, Minerva is now living inside the big stone edifice, which is known as Blessedbowl, acting as the leader of a society composed of people Pa supposedly rescued from the attacking enemy, while the patriarch continues to fight great battles outside of their safe haven.  However, she quickly reveals to readers that this is all a lie; Pa had tricked everyone into coming there and destroyed their villages himself, and she is making up all the messages from him that she claims to be receiving.  Meanwhile, poor Lester, the young man who came to her rescue in the first part, is doting on her as her faithful husband, a half-crazy amnesiac waging defensive campaigns against the birds and the moon, which Minerva has told him are spies.  After so many years of lies and manipulations, Minerva is tired of the culture she has fostered, and she is seeing it grow out of her control as legalistic people start to come up with their own interpretations of Pa's words, and Lester's memory seems to slowly be returning. 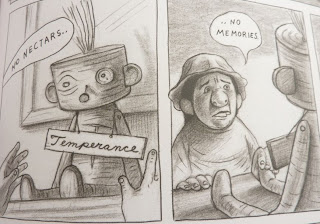 As another strange complication, this section of the book is narrated by Lester's wooden leg (Pa cut his leg off to keep him from escaping), which Minerva, despairing at her inability to conceive children, removes and carves into a child who shares the name of the book.  While he is an observer in the book's second section, he takes the center in the third, as he (having begun to walk, in an inexplicable but somehow fitting turn) escapes Blessedbowl and sets out to find Pa, and after finding him, accompanies him on wanderings through a mostly-deserted wasteland in search of Peggy.  When they eventually find her, she appears to have formed a society of her own, this one based around knowledge (symbolized by books) rather than lies.

So, what the hell is going on here?  One could take several interpretive approaches (or simply view the story as a surreal fantasy), but it certainly seems that Malkasian is going for a look at religion, with its made-up stories and ridiculous rituals that seem so real and so important to believers, along with its exclusionary tendencies, building up "protective" walls against dangerous nonbelievers and painting innocuous outside elements as threats.  It's a scarily familiar portrait, especially in the way the leaders can lose control of their followers as human nature seizes on whatever it can to gain power and influence for ever-smaller groups of like-minded people.  And then there's the competing group, Peggy's reason to Minerva's faith in lies, which is optimistically shown to render the impotent power behind the religious delusions powerless, and even reaches out to form a connection to those who have closed themselves off, with the truth setting them free.

Or maybe that's way off; there are certainly a ton of details and bits that beg for closer examination, like Pa's deranged obsession with Peggy (an attempt to sway nonbelievers?), Temperance's compassion for Pa even when he knows the terrible things he has done, Lester's recovered memory being facilitated by nectar from trees, Peggy's ghostly nature suggesting that she might be a figment of Minerva's imagination or an aspect of her personality, or why Minerva preaches Pa's message so strenuously after suffering abuse at his hands.  It's a lot to take in, something to occupy the mind for weeks as various explanations are considered.  That's the sign of a good allegory, or at least one that seems like a vibrant collection of symbols, neither too simplistic to take seriously nor too complex to make any sense at all.  Malkasian clearly has poured her heart into this story, bringing the characters to life even as they act to make readers think beyond the story itself.  It's a beautiful book, and one that will stick in the mind for some time after reading it.
Posted by Unknown at 12:13 AM