Empowered: She's getting there, slowly 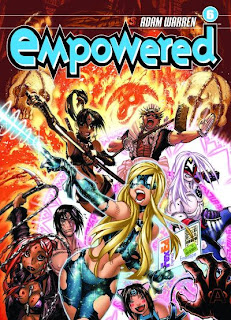 As fun as it is to have Adam Warren create a short story, one-shot, or miniseries like Livewires, Iron Man: Hypervelocity, Galacta: Daughter of Galactus, or Titans: Scissors, Paper, Stone, a long-running series is where he really shines.  Sure, Warren's cool sci-fi concepts, awesome action, dynamic art, eye-catching character designs, and hip, humorous, jargon-packed dialogue can all come out in a shorter work, but with the chance to keep telling stories in a continuous narrative, Warren reveals a wonderful facility for character, working over the course of six volumes and counting to flesh out personalities both central and peripheral, and demonstrating believable growth and change, getting readers invested in their fortunes and occasionally breaking hearts both real and fictional.

This volume continues the fallout from the disastrous ending to the previous installment, in which the villainous Willy Pete fried a number of superheroes, and generally caused a ton of mayhem and destruction.  While the big event came to a conclusion, its effects resonate through the entire volume, provoking revelations about what happens to superheroes that die in this world (Warren cannily avoids use of the word "zombie"), revealing a terrifying enemy for Emp to face, and demonstrating her strength in the face of adversity.  It's crazy, exciting stuff, full of all the usual humor and worldbuilding, pop/nerd culture references (yaoi and scanlation are the highlights this time around), and sexy, sexy, sexiness.  The small moments are what really stand out though, like a scene in which Emp and Thugboy share a tender moment following an argument about her risking her life, or the scenes in which Sistah Spooky continues to reveal the incredibly sensitive little girl that resides under the tough shell of anger and shame that we see has been shattered by the death of her lover.    Her flashback scenes are especially heartbreaking, showing her at her most vulnerable and lonely, demonstrating just how open she was to the coercion of the devil coming to bargain for her soul.  Warren even manages to combine this deft hand for character moments with his innovative sci-fi ideas, showing that Spooky's dead lover, Mindfuck, had implanted a "mnemonic emulation" of herself in Spooky's mind to comfort her in the midst of her worst memory.  It's a touching revelation, demonstrating the depth of feeling Mindfuck had for Spooky, but also incredibly sad, with Spooky stuck with a small comfort, but also a reminder of her failures, a ghost that refuses to let go.

Spooky is fast becoming a favorite character, one that continues to grow and develop, and will almost certainly end up being a key player in upcoming volumes.  Warren is certainly building a long-running mega-plot here, revealing the disturbing depths of his world and planting seeds for future conflicts that promise to be huge.  That's the other thing he does so well with a long-term series, fleshing out a fascinating world that is full of quirks and weirdness.  As volumes continue to be added, he keeps filling in the margins here and there, revealing a simmering conflict between powered and non-powered people, adding in bits of history, and showing the extent to which super-powers have permeated this world through glimpses of TV shows like "Super Dirty Jobs", in which a perky superheroine cleans up "mutagenic poo" and fishing for sea monsters with "anti-cherubim", or a radio show involving superhero fantasy leagues that are based on how popular various good guys are, or how many people the bad guys kill.  It's fascinating to see Warren's mind latch onto some throwaway idea or character design and make it work as part of his cohesive whole.

So, surprise, surprise, this volume was another good one.  By this point, you're probably either in Warren's corner or aren't going to venture anywhere near it, but it must be said, this series just keeps getting better and better.  Maybe it's seeing the main character continue to gain confidence (and getting upset at her when she beats up on herself, since, yes, people have flaws), or learning new details (like her origin, which is one of the most nonchalant in superhero comics history, although there are sure to be more revelations to come), or getting excited when she succeeds, but whatever the case, every panel spent in this world is worth it, enough to make one begin counting the days until the next volume appears.  Let's hope it doesn't take too long to get here...
Posted by Unknown at 12:00 PM