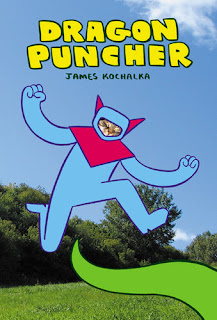 ), and this newest book of his manages to pare his style down to a minimum while still retaining a lively sense of play, some hilarious dialogue, and some interesting stylistic techniques, including the incorporation of photos into the artwork (or vice versa, considering that the bright linework is drawn on top of photographic backgrounds of peaceful nature scenes).  That last element is possibly the most interesting here, as the small cast of characters, consisting of the eponymous punchmaster, a tag-along monster kid named Spoony-E, and their prey, are "played", respectively, by Kochalka's cat, his son Eli, and Kochalka himself, with parts of their faces appearing to peek out through holes in their faces, making it seem as though they are wearing costumes and playing parts in this silly drama.  Kochalka makes his two main characters "act" especially well, with only their eyes and noses actually being visible, and choosing photos that manage to perfectly convey their emotions, which would be excitement and enthusiasm in the case of Spoony, and suspicion and wariness for Dragon Puncher (a perfect use of narrow-eyed cat expressions). 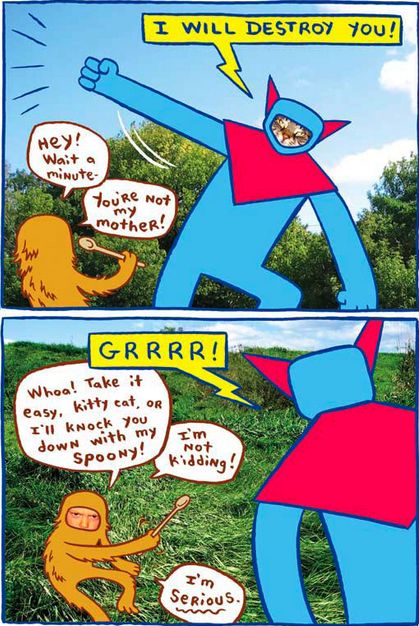 Kochalka himself pops up later as the slimy object of their hunt, and his whole face is visible, giving him the chance to overact to his heart's content, grimacing and scowling in a pretty hilarious approximation of a feral beast.  This book was obviously a ton of fun to make, and while it's short (all the better for the multiple, regular readings that its target audience will demand), it's a lot of fun to read as well.  It's about as simple as one of these stories can get, and there's no message to be taught (except maybe "kids can help out", if you want to stretch), making it a frivolous bit of silliness.  If anybody is going to lead the way in quality kids' comics, it's Kochalka. 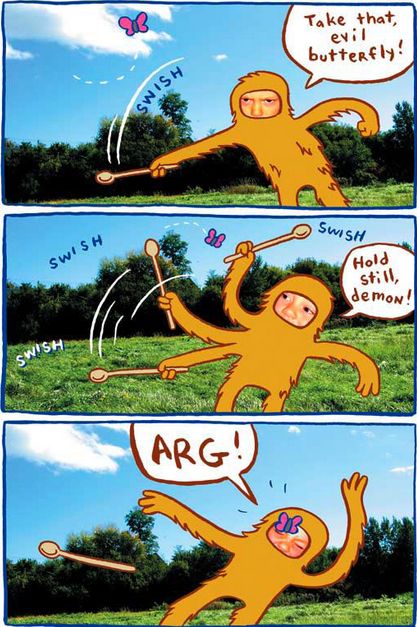