The Neverending Fray: Groo causes trouble even from a distance 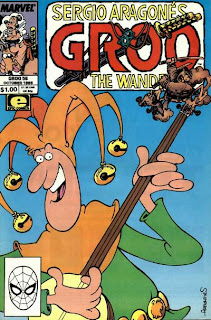 This seems like something of an inventory issue, a story Sergio and company had sitting around to pull out when they needed it. It's a Minstrel issue, and not one in which he interacts with Groo directly, but one of the ones where he tells a story about Groo for people's amusement. There's a decent twist though (and one that, for as much fun as he makes of Groo, brings the Minstrel's own intelligence into question), in that instead of laughing uproariously at Groo's stupidity, the people get angry and throw the Minstrel into prison, since they were the victims of said stupidity, and don't appreciate their bad fortune being turned into entertainment. And then, once in prison, Minstrel tries to entertain his fellow prisoners by continuing his story, but it turns out they are in prison because of Groo's actions in the story, so they also get pretty angry. Finally, he is brought before the king, and he finishes his story, but while it doesn't anger the king, it does remind him to tax his people, which leads to a familiar motif for a final page, but with the rhyming troubadour being chased out of town in the place of the series' star.

One would think the Minstrel would wise up and stop telling this same story once he realized he was among the people who were the victims of Groo's ineptitude, but maybe he has a storyteller's particular compulsion to finish telling a tale once he has started. The people do seem particularly thin-skinned, since even if they don't like what happened in the story, Groo still does some pretty funny stuff, like struggle to remember his orders:

The rest of the story is pretty standard Groo antics (if maybe slightly dumber than usual, which might be explained by it taking place before he was joined by Rufferto, which made him a bit less self-centered and stubborn). He's a soldier sent on a secret mission that he manages to screw up several times over, and then his attempts to continue following his orders long past the point when they mattered either inconveniences or destroys the lives of everyone in the kingdom. Good times, as usual, if a bit unexceptional. The main interest in this issue is seeing the Minstrel get a bit of a taste for the kind of treatment Groo usually receives. And he's generally an enjoyable character, in both words and appearance. It's always fun to watch the changing decorations on the end of his lute, with my favorite one in this issue being an image of himself that realizes when he is in trouble and tries to run away: 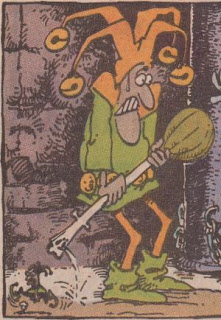 I still prefer the post-Rufferto Groo, the one that is more likely to try to help people in need, whether his actions make their lives better or worse. But I expect we'll get more of that next issue. In the meantime, wisen up, Minstrel!

This issue's stats:
Recurring characters: Minstrel. And look, there's Chakaal up in the box in the corner of the cover. And it's been a while since an appearance by the Groo Crew, so here they are doing a tumbling act:

Hidden message(s): The letters are hidden among the leaves of this tree:

Moral: It's provided in the Minstrel's last rhyme: "To talk about the Wanderer is dangerous to do/It can be just as deadly as to find yourself with Groo!"
Spanish words: A character named Gabo might be named after a nickname for Gabriel Garcia Marquez. Lord Miojo might be named for the Brazilian brand name for Nissin Instant Noodles, but it's more likely a portmanteau of "mi ojo", or "my eye". Likewise, Lord Tuboca, taken as "tu boca", means "your mouth",  Lady Suboca would be "su boca" or "his mouth", and Lord Supelo is "su pelo" or "his hair".
Running jokes: "Did I err?", although it's the Minstrel who says it, rather than Groo. Once again, a letter column joke makes its way into the comic when somebody asks why the thing on the end of the Minstrel's lute keeps changing. In a variation on the "as any fool can plainly see!" joke, somebody says "As anyone with half a brain is aware...", prompting Groo to think "I was unaware of that!"
Mark Evanier's job(s): Poet Laureate
Letter column jokes: Mark crowns the first winner of the Grooism contest: Andre William tells of a friend's wife who, when her family would waste half-eaten oranges, said "Oranges don't grow on trees, you know!" Too bad Andre never got a certificate. In other letters, Gerard Jones praises Groo, comparing it to his own series, The Trouble with Girls, making sure to mention the latter as many times as possible, and still asking for a plug from Mark, even offering to mention mulching if it would help. Finally, George Caragonne, in an attempt to keep his letter from being printed, asks for the definition of "mulch", what the blue thing on Groo's chest is, what is REALLY in the flask on the end of the Sage's staff, the name of the Sage's dog, if Sergio will draw him a full-color lithograph of every character that has appeared since issue #22, and several other ridiculous demands, but Mark prints his letter anyway.
Miscellaneous: I like this ad for a wireless Nintendo controller: 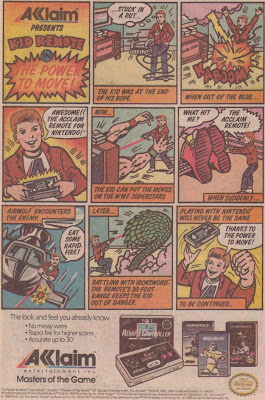 Look at all the stuff it lets him do, like knock down giant wrestlers and dodge disembodied dragon tails!
Posted by Unknown at 6:00 PM