The Neverending Fray: Groo vs. homelessness (and also homes) 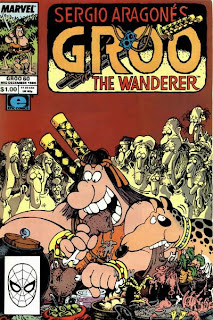 This issue is one that tends toward social commentary, taking on the issue of how society deals with the problem of homelessness, with the most pointed satire all included in one single panel:

That is, society doesn't know how to deal with homelessness at all. That's the most direct discussion of the issue, but there are several other points throughout the story when the rich claim the the jobless are just lazy moochers, and the poor state that they just want to survive like anybody else. This seems like a common approach whenever the series addresses some sort of social issue, and unless it's an overt put-down of some sort of evil, the best thing to do is probably point out the inherent ridiculousness of the way people deal with the situation (with some pointed ridicule of the powerful, blinkered individuals who either cause or exacerbate things), and then unleash Groo to commit his usual acts of mindless chaos. As one would expect, there are few answers provided, with one country attempting to ignore the problem, and the leader of another promising food and homes for anybody who needs them, leading to what one assumes is his downfall when Groo leads the population of a ruined kingdom to his doorstep on the final page.

(There is also a bit of a one-off joke about a country's foreign relations that has me wondering what current events of the 80s inspired it:)

The rest of the issue sees Groo wreaking havoc on the system, trying to find a job in a kingdom full of people who are out of work, and eventually barging into the palace to talk to the king, who gives him the task of running all the "unwashed bums" out of the kingdom. This leads to some amusement, as Groo insists that the badge bestowed upon him makes him infallible:

Soon enough, he somehow gets the people to riot and destroy the rest of the kingdom, which is one way to equalize the distribution of wealth. It might provide some moments of catharsis for those on the bottom of the heap, but dragging everyone into the ditch isn't exactly the best solution to their ills. That's the way things generally go in Groo's world though.

As a whole, the issue has its moments, but it's kind of an odd duck, with Groo mostly acting at people's behest or reacting to others. He's happy to attack the downtrodden when hired to do so, until they tell him to knock it off and assure him that they don't exactly enjoy being homeless and unemployed. He attempts to find a solution, or at least get the different sides to approach each other, but in the end, after everyone tries to ignore the problem, the only thing left for him to do is attack anything he sees and tear everything down. Actually, that's not a bad metaphor for the way society works, although it's rarely one mindless mendicant instigating such volatile change. The mob violence is pretty apropos, however.

Hmm, this ends up being kind of a downer of an issue. It does have its jokes though, and there's one panel that amuses me to no end, as Groo takes umbrage at being called homeless (as a wanderer, everywhere is his home) and departs proudly: 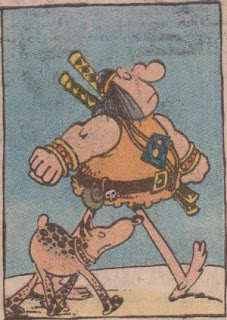 If you ask me, that image is downright sublime. May Groo always wander proudly, beholden to none, ready to take on whatever he meets. And after that, he can do what he does best!

This issue's stats:
Recurring characters: Some familiar faces can be spotted among the massive crowd on the final page, including the Groo Crew:

William B. Gaines and Al Jaffee (and maybe some other members of The Usual Gang of Idiots?): 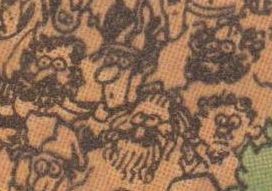 And probably plenty of others that I missed or didn't recognize.
Hidden message(s): I didn't find one, but I'll take some credit for spotting so many characters above.

Moral: "Solve a problem before you become part of it."
Spanish words: King Saco is named for the word for "sack". His country, Harina, means "flour". The neighboring kingdoms of Rueda, Puerca, Bota, and Talon mean "sow", "wheel", "boot", and "heel", respectively.
Running jokes: Groo's disgusting table manners get spotlighted on the cover. An old joke gets resurrected when Groo gets hungry and looks at Rufferto as if he might eat him. Groo starts to tell someone he is the Prince of Chichester, and he beats someone up for calling him a mendicant, even if it is accurate this issue. When the people follow Groo's suggestion and do something stupid, he asks "Did they err?" and then later, after screwing things up even more, he thinks "Did I err again for the first time today?"
Mark Evanier's job(s): Land Baron
Letter column jokes: Joe Bianca contributes this month's Grooism contest winner, telling of a time that he and a coworker were moving some trucks, and somehow a piece of over-ripe fruit caused the coworker to drive over a parked Buick. Joe Angerson contributes a numbered list of questions, including what exactly Mark does, whether Minstrel ever talks "normal", and what a first printing of Groo #1 is worth. Mark answers the first question by saying that he stands behind Sergio with a ball peen hammer and whacks him on the head whenever he has put enough people in a crowd scene. He then works a ball peen hammer into most of the other answers, saying that Sergio wields one to keep Mark writing the Minstrel's poems and people pay high prices for Groo #1, but mostly because they are being threatened with a ball peen hammer. Lon Wolf, who Mark says is famous due to having some letters read in a viewer mail segment on Late Night with David Letterman, suggests a bunch of possible titles for Groo spinoff comics, with my favorites being Grooverine, Mendicant Monthly, and Mulch Ado About Nothing.
Posted by Unknown at 6:00 PM