The Neverending Fray: Religion poisons everything 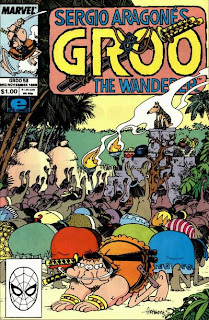 It's time for more social commentary in this issue, as Groo and Rufferto wander into a village whose local deity resembles our favorite pooch, in a nice bit of Mayan-influenced design: 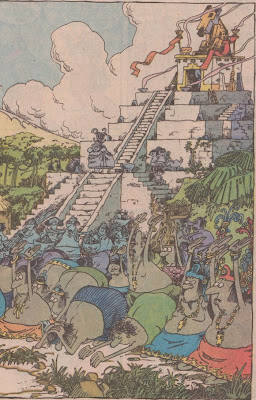 The people decide that Rufferto is the living embodiment of their god, but since he only speaks by barking, his wishes are difficult to interpret. This gives Groo, in a surprising display of intelligence, the idea to have his every wish granted by telling people what Rufferto wants. And thus goes the rest of the issue, as Groo, and the priests of the town, start interpreting Rufferto's wishes as whatever benefits them the most. They decide to build a larger temple, which will provide them with more luxuries, and in order to get the materials and money needed for construction, they attack other towns and forcibly convert them to their beliefs, then tax the people to raise funds. This last bit provides another welcome moment of commentary, one which is as relevant in 2012 as it was in 1989: 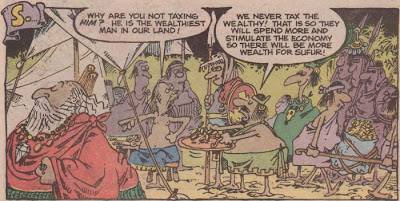 Eventually, one of the priests declares himself Rufferto's interpreter, making him the de facto ruler, since everyone who disagrees with him a a blasphemer. By this time, Rufferto is tired of life as a deity, especially since the priests won't let him participate in frays with Groo, so he wanders off, and nobody notices. By the time he and Groo are reunited and return to the village, the people have completely changed their interpretation of their god's appearance, and they no longer recognize Rufferto as his earthly avatar. It's a pretty amusing look at how people can twist religion into whatever form they wish, and how that religion can mutate into different forms to the point that it's unrecognizable. The whole thing is a farce, befitting this sort of nonsensical, Grooish treatment, and this issue does a wonderful job of pointing that out. When it comes to satirical views of modern society filtered through the world of Groo, this issue is currently the one to beat.

This issue's stats:
Recurring characters: None.
Hidden message(s): I spotted this one almost by accident. It's upside down at the bottom of the title page, formed by these blades of grass:

In a different sort of hidden messagery, Rufferto is mistaken for the god Sufur, which could be "Rufus" spelled backwards. I'm taking a wild guess that this is the name of somebody's dog, since a rival village's god is named Odif, or "Fido" backwards. Also, a toppled statue of another god resembles Usagi Yojimbo: 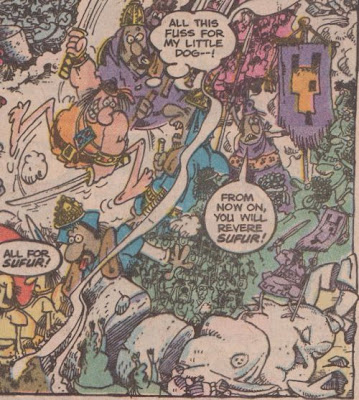 Moral: "Too many believe only in the belief."
Spanish words: The land of Taza is named after the word for "cup". The quarry of Piedra is aptly named for the word for "stone".
Running jokes: Groo interprets Rufferto's first godly request as a desire for cheese dip. While they don't specifically comment on it, some spectators are pretty disgusted by Groo and Rufferto's table manners:

Mark Evanier's job(s): Verger
Letter column jokes: Mark reveals the locations of the hidden messages in issues #43-55, and in an aside, he notes that issue #53 was their "every-century Giant Spider Issue", meaning that we should watch for the next one in issue #1252, coming in June of 2089. Rodney Schroeter contributes the issue's Grooism, telling about a time he and his wife were eating dinner at a restaurant with one busy waiter, and after they ordered and finished their dessert, the waiter asked them if they would like dessert. Johnny Ogar asks, in a numbered list of questions, what color Groo's hair is (Mark says it's Mulch Brown), at what age Groo started wandering (find out in the second Groo graphic novel, The Life of Groo), and how many kopins equal a U.S. dollar ("all of them"). Finally, John Coleman tries to revive a one-issue running joke by contributing a letter consisting solely of the question "Start what?"
Posted by Unknown at 6:00 PM