The Hypo: -chondriasis, not -thermia


The Hypo: The Melancholic Young Lincoln
By Noah Van Sciver
Published by Fantagraphics 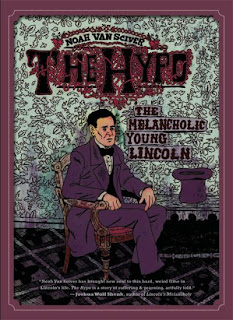 Abraham Lincoln has become such a near-mythical figure in American history, the Great Emancipator who held the country together through a Civil War and wrangled world-shaking political victories through sheer force of will, all while speaking eloquently, charming everyone with his easygoing nature, and maintaining a signature beard-and-stovepipe-hat appearance, that it can be difficult to remember that he was an actual person, with human emotions, desires, faults, and flaws. But Noah Van Sciver does just that with this book, which follows the future president early in his political career as he tries to eke out a living in Springfield, Illinois while also attempting to woo the lovely, politically-aware Mary Todd and battling crippling bouts of depression. 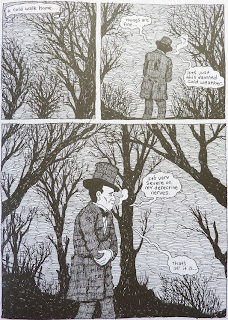 That last subject might be the most intriguing element of this story, since mental health is still not very much discussed or understood even in the modern day, so acknowledging that one of our greatest leaders suffered from the debilitating effects of mental illness makes for a fascinating chapter of history. Van Sciver's art is perfectly suited for such a tale, his jittery lines filling pages with the lovely, dirty details of life in the 1830s, along with lovely flourishes of well-defined atmosphere like swirling clouds of tobacco smoke or complicated wallpaper patterns that mirror characters' chaotic emotions. He gives his characters a wonderful expressiveness, especially Lincoln, who usually looks awkward and uncomfortable, his shoulders slouched, his head tilted at odd angles, his expressions regularly stricken with fear and uncertainty, and sweat often beading on his brow. There are flashes of the man he would become in moments when he tells a story about his military service or comes up with a scheme to get out of a duel, but he's startlingly unformed, nearly unrecognizable as the famous historical figure we supposedly know so well. 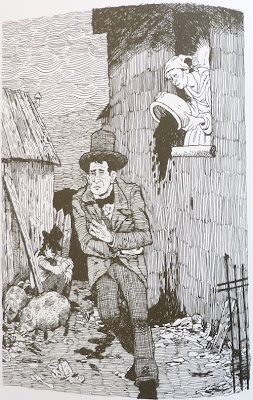 The most striking sequence comes when he breaks off his engagement with Mary Todd and falls into such a severe depression that he can barely function, which Van Sciver punctuates effectively with scenes of Springfield falling into decay, then brings front and center by conveying the horrors of the medieval "medical treatment" that he goes through, which involves bloodletting and the consumption of mercury. It's a rough read, with Lincoln's mental and physical anguish thrust into the reader's face, his pain so visceral that one can't help but experience some of it sympathetically.

The eventual recovery, and the following scenes of Lincoln reuniting with Mary and ending up in the aforementioned duel following some unwise attacks on a rival politician come off as quite cathartic, a positive ending that points toward a happy future and greater political success. But Van Sciver makes sure we don't forget that mental illness is something that doesn't just go away by including an epilogue that illustrates a poem attributed to Lincoln, in which a suicidal man contemplates plunging a dagger into his own heart. All in all, the book is an excellent trip through a little-told chapter of a famous man's life, one that humanizes him and enriches his story, providing some insight into what made him into the leader he became and reminding us that he was as human as the rest of us.