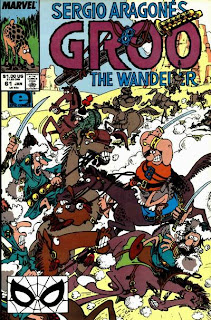 The thing about Groo is that he's destined to screw up pretty much everything he tries to do (except slaughtering large groups of soldiers, thieves, or anybody foolish enough to get in a fight anywhere in his vicinity). This provides readers with copious comedy, but since anyone and everyone can bear the brunt of his ineptitude, some poor, undeserving fools are going to get screwed along with those who so justly end up with their lives destroyed. It's a necessary effect of Groo's unpredictability, since one can never expect him to do anything as planned (and let me note how impressive it is that the creative team manages to keep him so unpredictable and keep coming up with funny ways for him to defy expectations throughout the entire life of the character), but it can lead to some unhappy, and therefore potentially unsatisfying endings. One can always cheer when the crafty bandits or evil kings receive a comeuppance, but the poor merchant who trusts Groo to guard his wares only to see everything he owns stolen or ruined? That's somewhat less palatable.

Of course, everything can be forgiven if it leads to comedy, and tempering the destruction visited upon the fairly innocent while ensuring maximum impact on the evil can mitigate any distaste. Take this issue, for instance. Groo gets involved with some horse traders, doing his best to keep their animals from being stolen by a band of thieves, or to recover them when they inevitably are. It's a funny back-and-forth of a plot, as Groo defeats the bandits, only to have them trick him and steal some or all of the horses, which he then manages to recover, only to be tricked again, and so on, all leading up to a confrontation that decides the horses' fate for good. It makes for a lively, funny read, as one wonders how the bandits will fool Groo each time, and how he will counter, with the continued expectation the he will manage to screw things up for both sides before the story is over. Do the horse traders deserve what eventually happens? Not really, but that's what they get for trying to base their plans around Groo, even if said plans are meant to be positive.

There's plenty of enjoyable stuff to see in the issue, with Sergio's goofy depictions of horses, with long, skinny snouts that end in surprisingly expressive mouths being a highlight. I like the face the white horse is making in the middle of this panel:

Another good source of comedy at this point in the series is the wordplay that Groo engages in. Actually, that's not the right term, since he's definitely not doing it on purpose; it's more of a mangling of language: 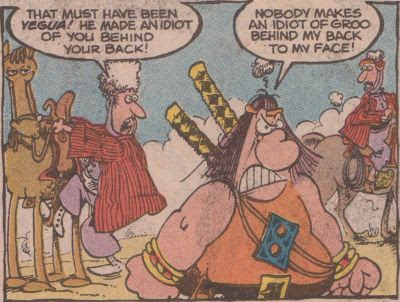 Sprinkled with an ignorance of what words mean or a defiant misuse of them:

I can never get enough of that sort of thing. And that's just one type of joke in a series that contains much, much more. You want slapstick violence? Insults to people's dignity? Just plain funny drawings? This series has it all!

Hidden message(s): It's hidden in the shading on the side of this bluff:

Moral: "When you do not think for yourself, no on thinks for you..."
Spanish words: King Caballo is named after the word "horse", of course. On the other hand (or hoof), the bandit Yegua is named after the word for "mare". Even thought it's not Spanish, Porto Pass might be named after a city in Portugal.
Running jokes: I think the continued desecrations of Usagi Yojimbo's image qualifies as a running joke at this point: 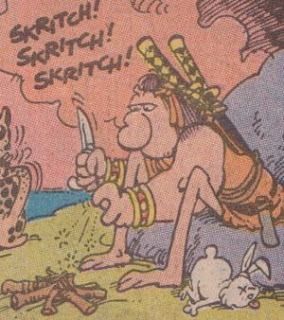 When Groo gets called a "pedestrian", he wonders if it is anything like a "mendicant". Groo vows to teach the bandits to "play me for the fool I am!"
Mark Evanier's job(s): Equine Unit Manager
Letter column jokes: Damian Ritter offers a numbered list of questions, asking what is the true reason for life, what is Groo's reason for life, what is Mark's reason for life, and why people write letters that have nothing to do with the comic. Mark answers the first by saying that the true reason for life is to bring joy to others, then says that is not true of Groo, himself, or off-topic letter-writers. Gary Chaos Parnassus tries to hypnotize Mark into piercing Sergio's right ear and soaking his feet in a bowl of warm cheese dip, but Mark says the joke is on him, since Sergio's right ear is already pierced and his feet are already soaking in cheese dip. Timothy King offers this month's Grooism, relating a conversation between two friends in which one said that the other was saying that everything is relative, and the other said no, it just depends on how you perceive it.
Miscellaneous: This is the first issue of the 90s, and while Groo managed to avoid the excesses of that decade within the comics themselves, the ads are already getting obnoxious, with this one for the Turbografx 16 video game system being especially weird and offputting: 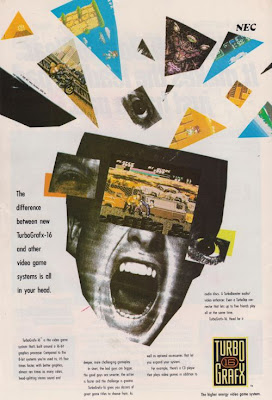