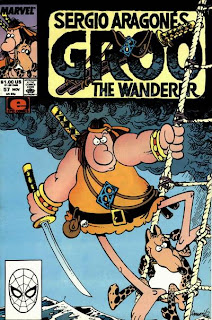 Sometimes, an issue of Groo has enough stuff in it that one wishes it could be expanded to greater length, in order to give Sergio more chances to draw neat stuff, or to have Mark and Sergio come up with more funny jokes and ideas. Of course, stretching stories out to multi-issue length can also have detrimental effects, like padded material to fill out the story to the correct length, or repetition of jokes, but when you get a glimpse of something you like, it's hard not to wish for more. In this issue in particular, there are no less than three elements which I would have loved to see more of: (1) the story's setting, a giant, unwieldy vessel constructed of several ships haphazardly fused together; (2) Groo being named the captain of the vessel, and even though he expects to fail at his duties and sink the ship, he manages to do the right thing by accident; and (3) Captain Ahax also ending up on board and trying to find a balance between his appreciation of the magnificent structure and his certain terror that Groo will find a way to sink it. Any two of these items would make for a great story on their own, but with a third thrown in, the issue as a whole gets a bit crowded and rushed, which is a shame. So let's look at each element to see what I liked and wish could be expanded:

(1): The ship itself is a marvel of Sergio's intricate artwork, but we don't learn very much about it, and we don't get to see enough to really understand its scale and construction. The best view comes on the title page, which gives us a full view of the vessel, a floating mass that appears to be a conglomeration of at least seven separate ships, all nailed and lashed together to form a sort of superstructure that has apparently existed so long that it has sprouted its own trees and gardens: 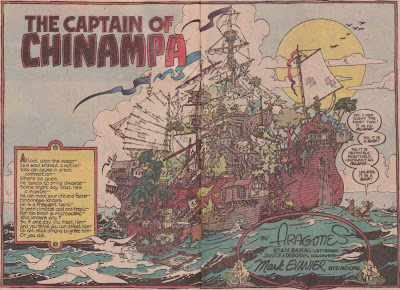 Where did such a thing come from? What is life like on board? How long have they been floating around the ocean? What sort of interactions do they have with other ships? We only get the barest hint of life for its denizens, who we first meet mourning their captain, who, as commander of the ship, outranked even the king. But later we learn that they've been floating in circles without ever seeing land, so he can't have been a very good captain. There's the suggestion of an interesting story there, and while it's not necessary to learn the history or biography of every land and person Groo encounters in his wanderings, the vagueness of this particular example suggests that Sergio had a neat visual idea for a setting, but he and Mark only constructed the barest bit of story around it.

But even without a full history of the floating edifice, I would have like to see it explored some more, to see how the ships fit together and what the people do to survive, whether they spend time shoring up construction, tending makeshift gardens, or trading with other ships that pass by. I've stated before that one of the things I love about this series is the tangible details that Sergio fills the panels with, the suggestion of daily life and activity that is going on in the background of Groo's silly adventures, but the people on this ship don't seem to be doing much at all. Aside from the people who bring Groo food whenever he orders it (which is often) and carry out his various nautical commands, most of them seem to just be standing around in the background:

It seems like a real missed opportunity to provide a glimpse of the lives that Groo has interrupted this time around. How dare Sergio not squeeze every possible ounce of entertainment and edification onto these pages for my enjoyment!

(2): Groo being put in a position of power is a common source of comedy, and it works well here, giving him a funny hat to wear and providing us with moments like this: 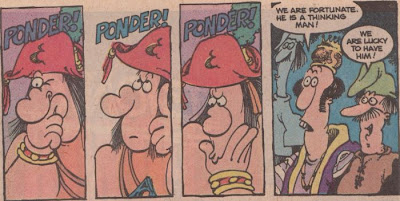 The big joke here is the defiance of expectations, as one would expect Groo to screw up and ruin everything. Hell, even Groo expects that to happen, so when his orders accidentally prove beneficial, it's a twist on the usual joke that nobody should ever plan for Groo to do something. This time, the person planning for Groo to fail is Groo himself, which makes his inadvertent success a funny gag, and another one that could have used more of an arc. That's probably why Ahax is introduced late in the issue: to give Groo somebody to play off of as he fails to fail. Which brings us to...

(3): Captain Ahax is one of my favorite supporting characters in the series, probably due to the hilariously crazed way in which he reacts to Groo, with his hair frizzing out like it's been electrically charged and his eyes lolling in different directions. Just check out the timing of this sequence, in which he first comes on board the massive ship and learns who its captain is: 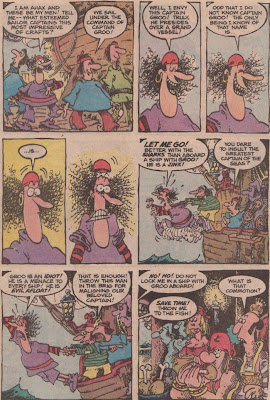 Few can compare to Sergio when it comes to comic pacing in comics, and that sequence of narrow panels makes me laugh out loud every time, as does Ahax's posture in the bottom tier as his men struggle to keep him from falling overboard. His every appearance is full of stuff like this, and it never fails to amuse, so while it's probably just a personal reaction to this specific story, I find Ahax's arc here kind of cheap, as he assumes command of the ship while sure that Groo will find a way to sink it, and sure enough, Groo does so, but in a way that makes its people happy, providing yet another reversal of expectations. Even if I'm not fully satisfied, we still get plenty of moments like this:

Really, it's a rather enjoyable issue, tying itself up in a neat little conclusion that manages to fulfill Ahax's prophecies of doom while defying Groo's (and the readers') expectations and resulting in him being hailed as a hero, even if he never finds out about it. That's not a bad trick, and with all the comedy contained in the issue, there's really no need to complain. I still do though, since I see potential for more, and I know the Groo Crew is capable of delivering it. Yes, I demand absolute perfection from my silly barbarian comedy! But really, I'll take what hilarity I can get, and I know I won't be disappointed.

This issue's stats:
Recurring characters: Captain Ahax
Hidden message(s): It's written upside down on the sail in the corner of this panel: 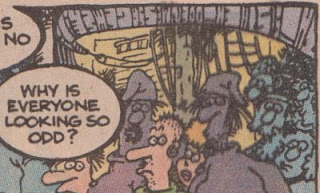 Moral: "Out of the worst can often come the best."
Spanish words: The huge, crazy ship is named Chinampa, which isn't apparently Spanish, but is a word for a kind of farming people did in ancient Mexico.
Running jokes: Groo thinks about eating Rufferto again, but immediately regrets it, since he has no firewood. Groo also eats disgustingly, but nobody seems to mind, at least at first. And yes, Groo's propensity for sinking ships is much discussed.
Mark Evanier's job(s): Stevedore
Letter column jokes: Bob Moore asks exactly what kind of water the Sage has in his flask, "perrier, seltzer, mineral, pond, Mississippi River, lake, ocean, polluted, or just plain old tap water"? Mark replies that it is plain stream water. He used to carry a potion called Instant Water, but he could never figure out what to add to it. Stewart Lewis says the makers of Groo are "turning the minds and souls of today's young people into helpless, slobbering dog sausages," so they should be "dragged out into the street and [a] shot, [b] dismembered, [c] stoned to death, [d] force fed sausages, [e] forced to read Groo, Mad, and Oprah Winfrey transcripts, and [f] forced to watch Bob Hope vacation slides," but he adds a P.S. saying to keep up the good work. Shannon Davis asks a list of numbered questions, including a question about half of Sergio's moustache being shaved off that Mark corrects by saying that was a joke and he would never do something like that to Sergio, but he did tattoo a life-size picture of Roseanne Barr on his body, and when he ran out of room, he had to continue onto Stan Sakai. And David Wilmes contributes this month's Grooism, in which a kid in his sister's anatomy class asked if it was possible to live without any bones. Sounds pretty Grooish to me.
Posted by Unknown at 6:00 PM