The Neverending Fray: He never bought me a house either 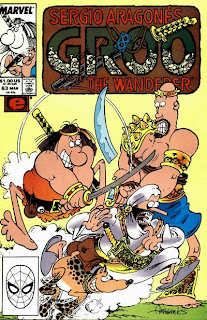 I've always liked Pal and Drumm as supporting characters, probably because they make for an entertaining comedy duo, with Pal (who sort of fits the ugly stereotype of Arabs as unscrupulous, cheating businessmen, although I don't think Arabia actually exists in Groo's world) coming up with elaborate schemes that Groo inevitably screws up, and Drumm acting as more of a physical (and mental) equal to Groo that can be satisfyingly clobbered for calling Groo a mendicant or something. This particular issue focuses more on Pal than Drumm, although the latter does get to act as the dumb foil for the former's trickery, and his increasing offense at what appears to be an act of beneficence toward Groo instead of himself provides a good bit of comedy, and a gag that continues well beyond the confines of this issue.

Said scheme? Real estate price manipulation, stemming from Pal's realization that he could potentially make a lot of money by using Groo to drive prices down, then after buying as many houses as he can, selling them for a large profit after Groo moves away. So he buys Groo a house, which provides several good jokes, as Groo is so enthused by being a homeowner that he remarks excitedly about every mundane detail: 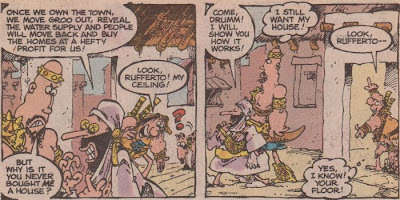 Unfortunately for Pal, other local businessmen get wise to his scheme, and they take it a step further, offering Groo larger houses in other villages so they can profit off his absence in their own vicinity, eventually gifting him with a castle, just as he gets over the novelty of owning a home and realizes that he doesn't want to be tied down to one location. It ends up being an amusing sort of chase, as Pal struggles to keep up with Groo and get him back to the confines of his original plan, but only making things worse as he struggles to contain the force of nature that he unleashed. As I always say, basing any plan around Groo is a sure path to failure, and probably death and destruction as well.

I had remembered this issue as being hilarious, and it's got its moments, but it didn't quite live up to the memory, being more of a low-key form of a chase that doesn't really allow Groo to unleash his full potential for mayhem or destruction. Usually somebody trying to get him to do something leads to much more catastrophic results, but it is satisfying to see Pal and Drumm totally ruined by their own scheme.

The issue does feature one of the series' more chaotic title pages, depicting the results of Groo trying to help out in the construction of an aqueduct: 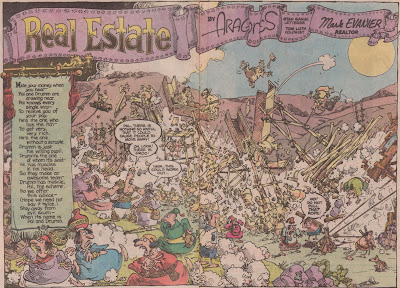 Just look at all those flying figures, collapsing timbers, and fleeing spectators! How he managed to do all that just by pulling the wrong rope is quite impressive. There's just so much going on in that image: guys flying through the air or barely hanging on; all sorts of tools and materials flying about; people staring in bug-eyed disbelief; people falling on top of each other; a couple guys standing on a platform that is slowly collapsing under them; so many screaming faces; people running away clutching small children. I do like seeing people going about their normal lives before Groo shows up and throws them into disarray, and this issue has plenty of that. It's not as funny as I had remembered, but it's a good time nonetheless.


Next: Now that I've caught up on issues which I had skipped, we're finally getting to "The Painter".
-----

This issue's stats:
Recurring characters: Pal and Drumm (whose names, by the way, seem to be a play on the word "palindrome", but there's not really any deeper meaning there, as far as I can tell). And look, Sergio's in the box in the upper left corner of the cover!
Hidden message(s): I didn't find one, consarn it.

Moral: "You can always buy another house but you cannot put a price on a home."
Spanish words: The town of Madrina is named for the word for "godmother", while nearby Rio Largo means "long river".
Running jokes: This issue is the origin of the "You never bought me a house!" joke, which Drumm always says to Pal whenever they appear from this point forward. He also asks Pal "What pirates?", of course.
Mark Evanier's job(s): Realtor (too obvious, if you ask me)
Letter column jokes: Jason Woods writes a nice, complimentary letter about how reading Groo has reawakened his interest in comics, but Mark tells him it's not at all fitting for the Groo letter page, so he provides some examples of more appropriate letters. First, there's one from "Hermit" Wilson, which simply says "(letter withheld by request), and then Sean Scanlon writes to Alien Legion and realizes halfway through that he's in the Groo letter column and starts screaming for help. Rol Hirst's letter also probably counts; he(?) says that he likes Groo, "especially the pointy ears, long flowing cape, and yellow and black symbol." Mark replies by saying that Kim Basinger is nowhere near good-looking enough to play Grooella. Shawn Cier provides the issue's Grooism with a story of being on the beach when it started to rain and seeing a man urge his daughter to get into the ocean before they got wet. Mark also mentions receiving a bunch of letters from a Mark Lockwood, each consisting of an envelope containing a foil letter sticker, but not being able to figure out if they spell anything. I don't know if there's ever a resolution to the story, but it's worth mentioning, just in case.
Miscellaneous: Look, it's Fabio! 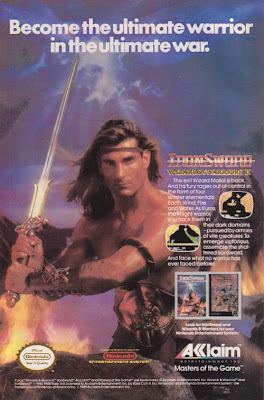