The Neverending Fray: Groo is the best Guru 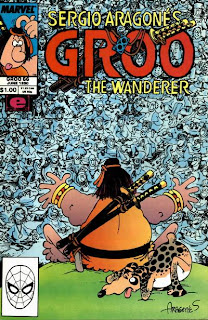 Here's a good example of an issue that uses the supporting cast well, establishing a premise and then seeing how each character reacts to it, and how their actions affect Groo, managing to find humor in each variation before bringing it back around to Groo himself and coming up with a satisfying conclusion. Plus, there's a bit of social commentary, with the story being a satirical look at people's nonsensical attraction to "gurus", which could be interpreted as "New Age" cultists or religious leaders (TV evangelists were a common target in the 80s and 90s), but also as motivational speakers, purveyors of self-help philosophies, or messianic public figures who don't really tell anybody anything they don't already know. Whatever the metaphor is representing, the Groo Crew doesn't have much respect for them or their followers, starting with the platitude-dispensing wise man that Pal and Drumm come across at the opening of the story who says things like "Man knows he cannot fly, and so he does not! Birds do not know this and so can fly!" When he notices how much is being donated for the privilege of listening to such nonsense, Pal gets the idea to exploit this gullibility, and he recruits the Sage to offer similar advice.

I'm often fascinated by the Sage, since he could be portrayed as a pure, selfless wise man who is always right, but he's a much more complex character, often showing frustration at people who don't heed his advice (especially Groo), and seeking to enrich himself when he gets the chance. Here, he jumps at the chance to get paid to speak, since it flatters his ego and makes him money, but he also comes up with an amusing interpretation of his own words of wisdom to make it seem like he's just trying to help people out: 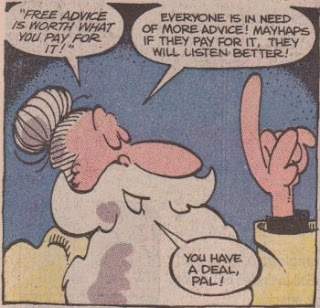 It's an interesting glimpse into his character, demonstrated that he's more than just a bearded guy who shows up to dispense pearls of advice. His new career prompts Groo to attempt public speaking as well, with the expected results: 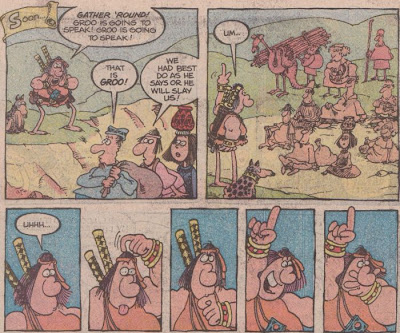 But this also kicks off a string of similar enterprises as other characters get wind of the scheme and come up with their own spin on it: Granny Groo pretends to channel an ancient warrior, and Taranto manages to convince people to pay him so he can tell them how worthless they are. And most amusingly, Groo manages to become the most influential guru of all after giving up on the enterprise altogether and refusing to tell people anything: 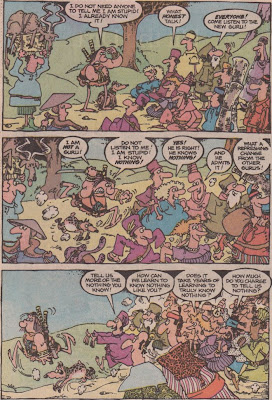 It's a great reversal, and a perfect encapsulation of the emptiness of this sort of thing, the way meaningless words can be twisted into something "deep" and "meaningful" if a receptive audience wants to interpret them as such. The creative team manages to get a lot of mileage out of the idea of Groo offering the most wisdom by telling people that he doesn't have any wisdom to offer them (and, by extension, neither do the other gurus), and the comeuppance that everyone (but not Groo, for once!) receives is quite satisfying. It's a perfectly-structured story, making great use of the included cast, offering up expectation and either delivering on them hilariously or twisting them into even funnier results. This is the kind of issue that I think of when I think about reading Groo; I expect more of the same from here on out.

This issue's stats:
Recurring characters: The Sage, Pal and Drumm, Granny Groo, Taranto, and you can see the Groo Crew in the crowd on the cover: 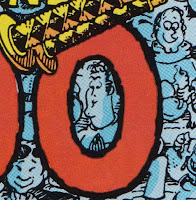 Hidden message(s): It's scattered among the flowers filling the letters of the issue's title:

Moral: "Wisdom cannot be bought. It can, at best, be rented until you can find your own."

Spanish words: None
Running jokes: Drumm is pretty sure that either Pal or the Sage were going to buy him a house, and he remembers to ask "What pirates?"
Mark Evanier's job(s): Morphemist
Letter column jokes: Doug Smidebush starts off his letter with "Dear Groo people," then fills a lengthy parenthetical with thoughts that this might not be correct, since it would sound like he is writing to characters within the book, then considers other options and specifies that it could include everyone who works on the book, including Sergio, Mark, Stan, and all the various colorists and editorial staff. By the time he gets to the actual content of his letter, he forgets what he was going to say. Wes "Einstein" Eccleston says he used his superior brain to find the hidden message in the Groo poster, but Mark says his brain would have been more superior if he hadn't bought a Groo poster at all. John Chandler contributes a single-sentence letter saying that he wrote the letter all by himself, but he notes in a postscript that his mommy helped him with the first sentence. Vincent D. Taverney asks why Groo's nose looks like the number 3, and Mark says it's because that's the average number of times per hour someone wants to punch him in it, and that his own nose looks exactly the same. Jason Santa contributes the issue's Grooism, in which he saw an act with a parrot that was supposed to fly to somebody's hand, but instead it attacked a spectator, prompting a young boy to comment "I wonder if it took them a long time to train it to do that." And Andy Neumeyer complains that Groo has never sneezed on an elephant, which he finds insulting because he sneezes on elephants for a living, so he demands that the title of the comic be changed to Groo, the Guy Who Sneezes on Elephants. Mark agrees, and refers to the series by that title at the end of the letter column. I don't remember if he kept up this joke in future issues, but I hope so.
Posted by Unknown at 6:00 PM