The Neverending Fray: It doesn't take Groo to ruin everything 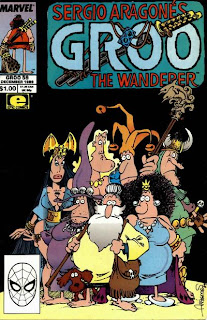 This issue sort of revisits the theme of issue #37, in which Groo's impending arrival to a town caused it to go to hell overnight, with property values plummeting, ne'er-do-wells arriving to take advantage of the situation, and everyone at each other's throats. This time around, it's the large supporting cast that jumps in to screw everything up in Groo's absence, since he had recently disappeared to a distant land where his reputation is not as dire (although we do see him and Rufferto on the last page, approaching a town which had been all but destroyed in his name, presumably about to add insult to injury). Is this a demonstration of how Groo can manage to ruin things even from so far away? Or is it an indication that he's not the real problem, but rather a flawed culture which upends itself in response to an overblown threat?

I would tend to choose the latter, especially given the large number of terrible decisions made by every familiar face here, even (especially!) the Sage, who kicks everything off by advising the king of a land which is happy and prosperous due to Groo's absence to build a wall which will keep the Wanderer out in case he ever does decide to show up. Sage himself notes that he was just trying to create a need for his services, and this greedy decision sparks a cascade of consequences when people from all around decide to move to this town that will be safe from Groo, causing all sorts of overpopulation problems and wreaking havoc on market prices, but also enraging Grooella, since all her taxpayers are moving away. Taranto and his gang of bandits also receive word of the Grooless city, which prompts them to come and raid it, so the king sends for Arcadio (accompanied by the Minstrel, as usual) to provide defense. And finally, Arba and Dakarba decide to come practice their magic in a place where Groo won't be around to screw things up. When they all converge on the poor little town, the expected chaos reigns, hopefully teaching all of our pals a lesson about who is the real cause of their troubles. They almost certainly won't learn anything though, and they'll still blame Groo for everything.

As an experiment in doing an issue of Groo without including the main character, this works well enough, since all the supporting players have established personalities, and it's fun to see them bounce off each other, but I would have liked to see more of a look at how people's nature can be their own undoing, similar to the aforementioned issue #37. And what can I say? Even though I've read more than fifty of these stories in a row, I miss the beloved mendicant when he's gone. I still think there's some decent comedy here, but nothing that we haven't seen before. And the same goes for the art; I really only found one panel I wanted to highlight, a neat example of a double silhouette in a scene in which Taranto and his men are sitting around a campfire: 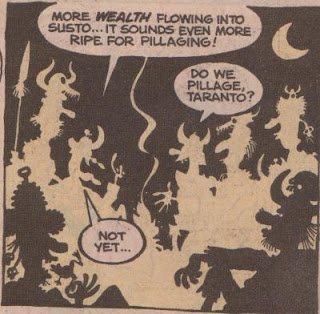 I guess this demonstrates how much of a creative spark Groo brings to these stories; they're just not the same without him. But that's fine, there are well over 100 other issue that place him front and center. I know where to go whenever I want to find him, that's for sure.

This issue's stats:
Recurring characters: Almost everyone (except Groo): Arba and Dakarba, Arcadio, Sage, Minstrel, Grooella, and Taranto, plus an appearance of the Groo Crew (minus Tom Luth, who seems to have gone AWOL during this stretch of issues):

Hidden message(s): I didn't find any standard "hidden message", but if you unscramble Arba and Dakarba's spells: 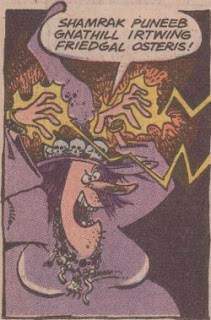 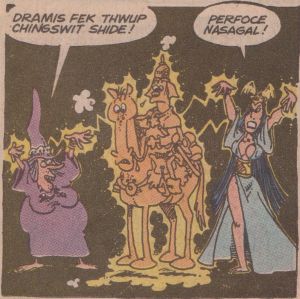 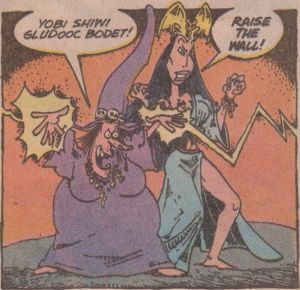 They reveal the messages "Mark has been up all night writing Garfield stories!", "Mark is fed up with switching cheese dip for lasagna!", and "Boy, I wish I could go to bed!" And in a different sort of Easter Egg, check out the reading material on Arba and Dakarba's bookshelf: 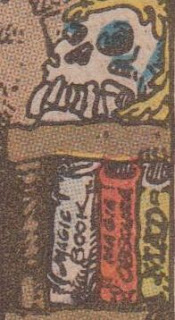 Moral: "All life affects us...even that which is far from our gaze."
Spanish words: The town of Susto is named for the word for "scare".
Running jokes: Without Groo to bear their brunt, the regular jokes aren't included here, but there are a few that continue throughout the issue, such as people insisting on including "pillaging" whenever anybody mentions looting and sacking, or everyone noting that Arcadio has a huge chin.
Mark Evanier's job(s): Helper
Letter column jokes: Mark agrees with Andries Harms that the blue "thingamabobber" on Groo's chest is a buckle of some sort. Andries also asks why Groo never wears armor (Mark says it's because his head is magnetized and would stick to the armor, causing him to walk like Groucho Marx), why Groo's upper and lower body are out of proportion and why he has such small elbow joints (this is the way Sergio thinks people are supposed to look, which is why his previous career as a plastic surgeon was a disaster), why Groo wears a belt when he doesn't wear pants, and why he has a little skull on his belt (he wears the belt to have someplace to hang the skull, and he wears the skull to decorate his belt). Diane "Doc" Westerfield wonders, since Groo doesn't wear pants, where he keeps his wallet and whether he wears underwear. Mark  says he has no wallet since he has no money and got turned down by American Express, and he refuses to discuss his underwear or lack thereof, since this isn't a horror comic. Finally, B.J. Lyda contributes this month's Grooism, in which he was giving a class report on Neptune and accidentally said it was the "aped" planet from the sun. He still got an A, so Mark says both he and his teacher deserve a Grooism certificate.
Posted by Unknown at 6:00 PM