The Rabbi's Cat: It's as good in motion as it is on the page 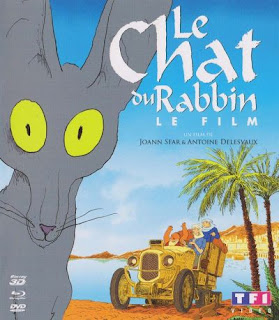 Joann Sfar has such a particular, idiosyncratic style of artwork that one might not expect his comics to translate all that well to animation, but this adaptation of one of his best-known (in the United States, anyway) works proves that notion wrong. If anything, Sfar's artwork makes a lovely transition to movement, with his tactile shading providing a lush, textured look to surfaces while still retaining a hand-drawn look, the characters moving with a nice combination of realism and cartooniness, and beautifully detailed art filling the screen, mostly sticking to a single style but occasionally shifting to distorted or simplified exaggerations for dream sequences and the like. It's absolutely lovely, a joy to watch play out throughout the film's running time, and along with some excellent voice acting and a plot that just kind of meanders along in whatever direction it feels like going, it makes for a wonderful, whimsical bit of entertainment, but one that also provides some thoughts to ponder if one is so inclined. 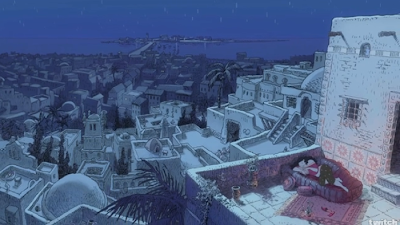 For those unfamiliar with the source material, the story follows a cat and his owners (if a cat can be considered to be owned by anyone), a rabbi and his daughter who live in Algiers in what appears to be the 1920s or 30s. Early on in the story, the cat eats the rabbi's parrot, which gives him the power of speech and kicks off all sorts of interesting shenanigans as the rabbi tries to teach him about Judaism. Later, the cat loses his power to talk, and the plot heads off into some weird places, as the rabbi ends up caring for a Russian Jew who fled to Algeria, then goes on an expedition with him to find an Ethiopian Jerusalem that was supposedly the origin of both the black and Jewish races. It's an odd and kind of flighty plot, but what exactly happens isn't really the point; it's more about following around these characters as the cat struggles to understand humanity and religion, even though he would just prefer to spend time with his mistress, the rabbi's daughter. But for viewers, any time spent with these characters is a treat, with the voice acting and animation allowing them to display a real warmth for each other, both a physical closeness and also the kind of affection and irritation that families have. 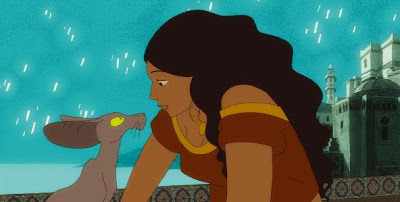 The discussions of religion are fascinating as well, with the cat attempting to learn about Judaism but fighting against a lot of the ideas on logical grounds with a feline contrariness, while allowing viewers to understand the comforting feelings that faith can provide. The rabbi himself has a wonderful attitude, solid in his beliefs but willing to say he doesn't know when the cat prods him with an inconsistency or contradiction. Later on, he meets up with an Arabic cousin who joins the trek to the Ethiopian Jerusalem, and they make a wonderful pair, holding what seem like conflicting beliefs, but willing to accept each other for what they are and share each other's joy and sorrow. It's a rather feel-good look at religion, an inclusive, accepting atmosphere that puts people before dogma (while still acknowledging, through both Jewish and Muslim characters that appear in the story, that there are those in any religion who are much more concerned with the letter of the law than with its spirit). It might be a rose-colored view of a past that never was, but by making some of the most contentious religions on the planet seem warm and friendly, it provides a window into what can make beliefs so important to people, without condemning those who don't toe that particular line. 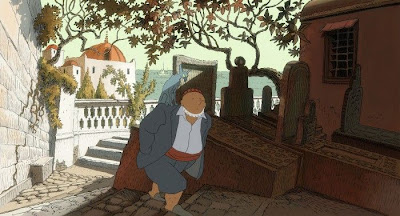 Religion aside, the film is a gorgeous trip into a world that springs to life from Sfar's imagination, and it's full of great visuals, goofy asides (including a meeting with Tintin that reveals him as kind of a racist, or at least a condescending jerk), cute character moments, love and warmth between people (and animals), expressive flourishes, nice voice acting (I like the way the cat's meows don't try to replicate an actual feline sound, but just consist of actor François Morel saying "Meow"), and a wonderfully realized setting. It turns out that there was no need to doubt the suitability of Joann Sfar's sensibility for animation; it ends up being a perfect realization of the look and feel of his comics. And hopefully it won't be the last time we get to see it either.