The Neverending Fray: My five-year-old could draw that! 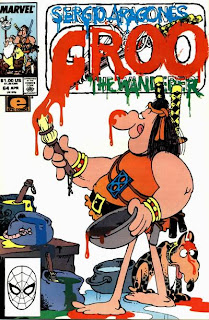 Here's an issue that I remembered as being something of a criticism of modern art (as in "That's not art, it's just a bunch of paint splatters!"), but while that is one aspect of the issue, the story is more of an excuse to have Groo romp through the art world, starting with a funny bit in which he joins what he thinks is a huge battle between two armies, but is actually a bunch of models posing for a painting. There's a nice spot-the-differences moment as Groo attacks a bunch of people who are trying to remain still: 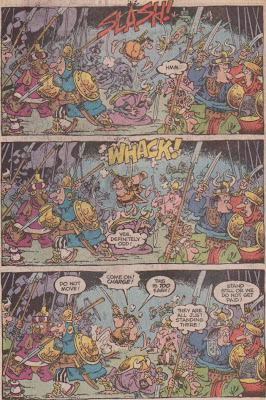 Those first two panels look almost like duplicates, but there are subtle differences, such as the banners moving slightly and characters' expressions changing, to indicate the passage of time between them, and some hilarious larger movements, like the guy Groo is attacking in the first panel falling onto another guy in the second panel. It's a pretty great scene, managing to sell how hard these people are trying to remain still while a violent nincompoop is raging through their midst.

From there, Groo decides to take up art himself, since it seems like an easy way to make money, which leads to an amusing bit in which he bullies two armies into posing for him, then makes them hold the pose while he goes to get paint (and some cow tails to use as brushes), then proceeds to produce a painting that looks nothing like the scene he is attempting to recreate: 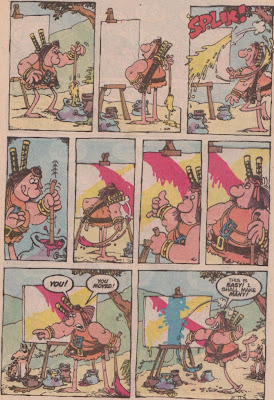 The following scene, in which Groo goes to sell his paintings to the king, is where the art world satire comes in, as the royal art critic, afraid of being killed for a bad review, pronounces them masterpieces, completely upending the dominant artistic paradigms as all the easily-influenced hangers-on of the kingdom decide to switch to Groo's style:

This is the sort of thing that I was kind of dreading with this issue, since I hate it when people declare something "not art" because it's different from what they think of as art (Like Serrano! Or Pollock! Or Picasso! Or Van Gogh! And so on throughout history...). But while this story does sort of play into that populist attitude, it's more of an "Emperor's New Clothes"-style attack on people who don't think for themselves, but assume that because a supposedly-knowledgeable person tells them something, then it's true. Which isn't to say that criticism is useless (I wouldn't want to put myself out of a job hobby!), but it's pointing out that people should form their own likes and dislikes rather than embracing or rejecting something just because somebody told them to.

And anyway, this is a goofy comic book making a joke about what it would be like if Groo was an artist, not some grand statement about artistic intent, so everything is handily deflated when the Sage shows up, and Groo asks his opinion on his paintings, insisting that he be honest. Since he's just about the only person who could get away with being truthful and keep his life, his frank assessment of Groo's work as "garbage" quickly sets things right. And so, it's back to the status quo. Groo can only remain in people's good graces for so long; eventually, everyone will come back around to the realization that he is an idiot. 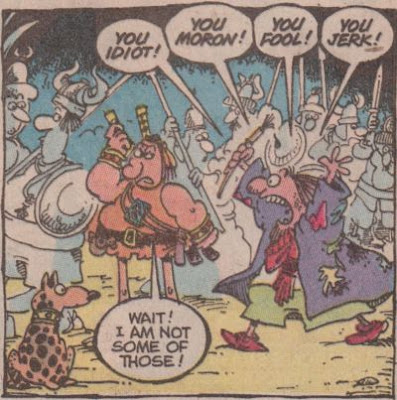 This issue's stats:
Recurring characters: The Sage, plus Sergio as one of a bunch of artists: 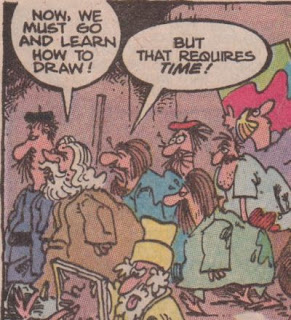 Hidden message(s): I would have expected to find one somewhere in the various paintings that we see, but I did not.

Moral: "Garbage that is well-wrapped is still garbage."
Spanish words: King Pecanins might be named after Mexican-American blues singer Betsy Pecanins.
Running jokes: In a case of a joke from the letter page making its way into the comic, Groo pesters an artist with questions, one of which is "Can I have a sketch?"
Mark Evanier's job(s): Palatine
Letter column jokes: Monika Maxa writes that she likes Mark's poems, and offers one of her own, which goes like this:


Roses are red,
Violets are blue.
This poem isn't original,
But yours are.

David Seigler complains about people coming up with cute ways to try to get their letter printed, since that's not what fan mail is about. He promises not to try anything like that, hoping to "teach you not to underestimate the high scruples and principled character of a true Groo fan!" Mark says he only printed the letter because of that sentence and wonders why he and Sergio can't come up with funny stuff like that. Lon Wolf wonders if Groo is part of the Marvel Universe, the "Multi-verse", or the "Shadow Race", whatever that means. Mark says Groo takes place in the real world, and the rest are just comic books. Levi Stahl, representing "The Entire Population of Grooville, Illinois", says that everyone in his town loves Groo, but they've started a feud over whether he is better at eating or slaying, and he asks Mark to settle the issue before violence breaks out. Mark says he wasn't paying attention and asks what the question was again. Finally, Steve Moore contributes the issue's Grooism, which is a story that happened to a friend of a friend about a family that was so excited about paying off their house that they held a mortgage-burning party, got drunk, and burned the house down. I find this tale somewhat dubious.
Posted by Unknown at 6:00 PM