The Neverending Fray: Groo has no horse cents, much less sense 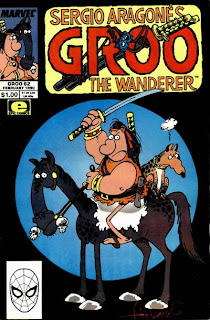 Judging by this issue's stated moral, its message is supposed to be about jealousy, although I find it more amusing as a look at the overdramatic affection that dogs can have for their owners. When Groo acquires a horse, Rufferto immediately becomes jealous, sure that Groo is going to leave him behind in favor of a new traveling companion. While Groo has no intention of forsaking his loyal dog in favor of a different animal (we learn from his thoughts that he plans to eventually eat the horse), circumstances, along with Groo's general obliviousness, conspire to reinforce Rufferto's worries. But don't worry, by the end of the issue, Rufferto realizes that Groo still loves him, and always will. It's a bit overly sentimental, and Rufferto (when judged by human standards) comes off as kind of an insecure jerk, but it's nice to get a reaffirmation that our pals will always stick together.

However, I find it interesting to judge Rufferto as a dog, and see how the issue reflects that sort of intense affection that dogs often have for their owners, a need to demonstrate love and affection and have it returned, along with a jealousy toward interlopers. Given access to their inner thoughts (and an increase in intelligence necessary to make those thoughts worth accessing), most dogs would probably act much like Rufferto does here, showing complete and total love toward their master, but also brimming with anxiety that something will separate them. It must be pretty exhausting, especially with a master as impulsive and unpredictable as Groo. Really, he just needs some regular affection; is that so hard, Mr. Mendicant? 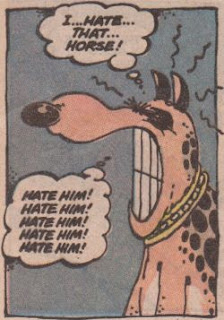 That's probably more doggie psychology than is necessary, but it's something to discuss in a fairly uneventful issue. Rufferto really works better as a supporting character than as the one in the spotlight, and his constant worries are kind of tiresome, especially when we know that his worries are unfounded, and maybe even somewhat contrived, given that Groo provides assurances to the contrary via thought balloon, rather than just stating them outright like he usually does. All would be forgiven if the issue was full of constant hilarity, but it's not one of the funnier entries in the series; the highlight is probably the series of gags in which Rufferto tries various methods to chase the horse off: 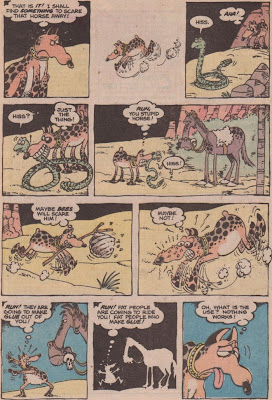 That's not bad, but it's far from the heights of this series' comedy. I'll take what I can get though, and luckily, next up is a classic, at least from what I remember. Let's hope it holds up.

This issue's stats:
Recurring characters: None, unless Groo's horse turns up again.
Hidden message(s): It's contained within this sound effect: 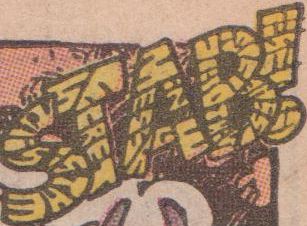 Moral: "If you doubt a friend, you are not being a friend."
Spanish words: None.
Running jokes: Rufferto gets jealous when Groo looks at the horse like he looked at Rufferto when they first met, not realizing that at the time, Groo was considering eating the poor dog. And here's another Usagi Yojimbo appearance (which might not count as a joke, since he's not being killed or destroyed, but there is the suggestion of future slaughter): 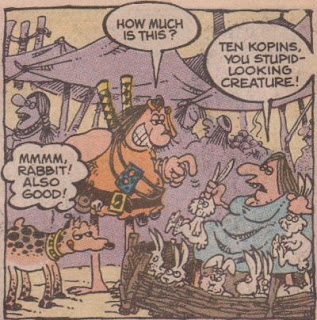 Mark Evanier's job(s): Large Jockey
Letter column jokes: Eleven-year-old reader Joel Turkel complains about how Groo's behavior changes around Chakaal. Mark says that men do strange things when they're in love, and some have even been known to bathe. Somebody calling himself "The Phantom" claims he has some incriminating photos of Mark and blackmails him for $3.65 each week. Mark agrees, even though he says it's his whole salary, as long as The Phantom sends him an assortment of sizes, and they had better feature his good side. Eric Purtle contribute's the issue's Grooism, quoting rookie Chicago Cubs catcher Rick Wrona, who said, "You only hit your first home run so often." Mark says he'll send him a certificate as soon as he can scrape up enough money to buy a stamp. Some Canadian readers named Jorey and Corey say they weighed their Groo collection, and the result was 937.8 Groo-Grams, or .9378 kilograms. Mark tries to convert this to pounds, but gets confused as to whether this letter page should be included; that is, do they include Groo-Grams in their measure of Groo-Grams?
Posted by Unknown at 6:00 PM