The Neverending Fray: I feel dirty 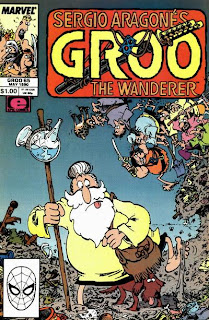 This might be the most overt "message" issue of Groo yet, in that it seems intended to highlight a topic and spur the reader to action. The issue at hand here is garbage, and the problems caused when it piles up without any long-term plans to do anything about it, with the encouragement to recycle as a solution. Of course, this being Groo, as much time is given to goofy jokes and general silliness as to speechifying, which is an approach that tends to make the message go down like the proverbial spoonful of sugar. It's when that balance is off that the comic can suffer (I can think of a few examples from further down the road...), but it's quite well-managed here, making for a fun romp that might just make one think.

So: Groo is hanging out with the Sage, who comments on all the garbage littering the streets in a city they are passing through. Groo says that people might pay to have somebody take it away, a thought which he finds hilarious (because he is dumb, you see). When the two of them run into Pal and Drumm, and Groo repeats his joke to them, Pal immediately seizes on the moneymaking opportunity. And so the plot is off, as Pal quickly starts making money in the new business of waste management, but immediately runs into problems disposing of all the refuse he collects. He tries burning it, but this pollutes the air. He tries dumping it in the ocean, but that kills all the fish. They seem to find a decent solution when Groo suggests dumping it all in a canyon, but when it fills up, they're stuck once again. Sage eventually comes up with the solution of reusing the garbage, even using the word "recycle" to make sure readers get the message, but Groo manages to find the most disgusting way possible to ruin everything, providing a memorable finish for the issue.

This all makes for a fun romp of a story that manages to deliver plenty of jokes and still cover all the aspects of the issue being addressed, including an exaggerated montage of people treating their new, garbage-free lifestyles with carefree abandon (which could be seen as a metaphor for all manner of aspects of modern life): 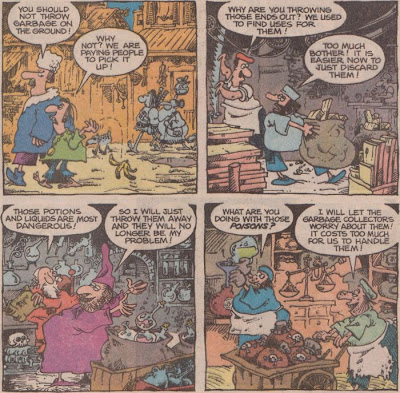 If there's any complaint, it's that the issue focuses mostly on Pal and Sage, giving Groo little to do except provide comedy in the background. He does get to do a bunch of that though, as well as act as Pal's enforcer when other garbage collectors try to muscle in on his territory:

Drumm also gets relegated to the background, which is kind of a shame; I always thought the best Pal and Drumm stories involved them both contributing some sort of antagonism to Groo, with Pal using brains (yet still managing to find his schemes stymied by Groo) and Drumm using brawn (and Groo always beating him up). The creative team has found a good way to use Pal as someone who is constantly conniving his way into some profitable enterprise, but they're still working on getting Drumm involved. I know there's at least one story coming up that makes us of them both, so as usual, I suspect they mange to figure it out.

The art, as ever, is lovely, full of Sergio's usual detail and energy, but the thing that really stands out for me this issue is the depiction of the garbage as a sort of grey-brown sludge, which is rather gross: 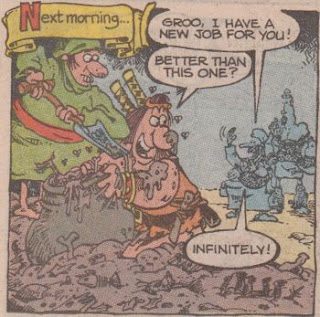 There's something viscerally upsetting about the images of trash that fill the issue. It might be the chunks of stuff like fish bones and banana peels that are all mixed into the muddy gunk, or the ever-present flies and stink lines, but it's all quite disgusting, and it makes the issue's finale especially repulsive. I don't know if that's a recommendation, or just an acknowledgement that Sergio and pals managed to really strike a nerve here, but it's enough to really make the issue stand out.

This issue's stats:
Recurring characters: The Sage, Pal and Drumm
Hidden message(s): It can be found, letter by letter, on the sheath of Pal's sword, combining to form this aggregate message (which, due to the printing on my copy, is difficult to read):

Moral: "Eliminate a problem before it eliminates you!" There's also a parenthetical after the "The End" that reads "(Unless we do something about it)".

Spanish words: The region of Basura is aptly named for the word for "trash", and what's more, towns in the area include Quisquiliae (Latin for "rubbish"), Ordures (French for "filth"), and Sordes (a medical term for "deposits of dirt or bacteria on the body").
Running jokes: Getting the obvious one out of the way, see Mark Evanier's job for this issue. Drumm says "You never bought me a house!" and "What pirates?" to Pal. The running joke for the issue is that after Sage says that there is money in garbage, Groo spends the rest of the story searching through piles of trash for some cash.
Mark Evanier's job(s): Mulching Consultant
Letter column jokes: Mark D. Warner writes that he has solved the mystery of the blue thing on Groo's chest; it's an ita-koshiate, or a kind of sword-holder made of a board with holes and fastened to a belt. He also says that the little skull on Groo's belt is a netsuke, his dagger is a hamidashi, and he suspects the water in Sage's flask is aqua vitae, or "the water of life". He says that the Groo Crew needs to try a bit harder to be dumb, because "you're starting to make sense to me." Jason Wagner threatens to start buying two copies of Groo each month unless Sergio sends him a picture of Groo. Mark says that from now on, they're not going to send him 12 pictures each month, so he'll have to buy 24 copies of every issue (I think this becomes something of a running joke in the letter column; we'll see). Tunc T. Olcer has a question that's been bothering him: "Just who is that ugly idiot with the orange tunic and the blue thing on his chest?" Mark decides any joke would be too easy, so he skips ahead to the issue's Grooism contest winner, Jason Dalio, who recalls the first words of his grammar school teacher, who said "If you want to succeed in my class, and in life, just remember these three words: think before you act." This issue also contains the Statement of Ownership (average copies sold for the previous year: 90,830; copies sold of issue nearest to the filing date: 92,100), but Mark fails to make any jokes about it. What a letdown.
Posted by Unknown at 6:00 PM