The Neverending Fray: Dragons - to kill or not to kill? 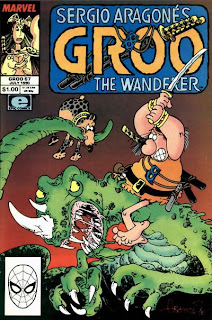 After a couple of "message" issues, this one veers back into just-plain-funny territory, with a story about Groo slaying a dragon, then discovering that it had been tamed and trained by a village who used it in an annual mock battle. Groo resolves to make it up to them, which leads him on a long journey to find a replacement, and then to find a magical way of aging the baby dragon he eventually obtains into adulthood. This leads to several rather amusing moments, but also some troubling thoughts, at least for those who immerse themselves in the world of Groo. The passage of time, for one, is enough to make one stop and consider, as Groo spends an entire year searching for a dragon and then working at a dragon farm to pay for one. That's a lot of dedication for a guy who usually doesn't plan more than a few minutes into the future.

And this might just be the comics fan's need to explain moments or behaviors that seem incongruent, but back in issue #53, Groo and Chakaal were busting up a dragon-farming operation run by Pal and Drumm, while he doesn't have any problem with such a thing here. The obvious explanation is that Groo doesn't remember that far back, and he didn't care that much even then and was just following Chakaal's lead. And also that I've read entirely too much Groo over the past several months and shouldn't worry about such trivial matters.

Anyway, the only real issue here is whether the story is entertaining, and luckily, the answer is yes. There are plenty of the usual jokes, but I especially liked Groo's fight with the (initial) dragon, which occurs mostly over this page: 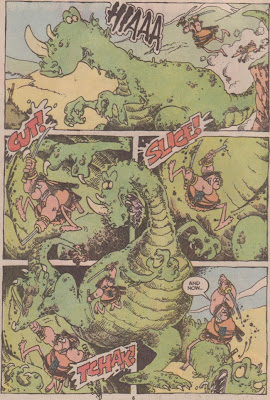 It's nice to see a full action sequence, since we usually only get a glimpse of Groo's fighting style as he is attacking an army or something. Here, we get to see the whole battle play out, and I especially like the way the dragon is sort of standing in front of the page. Sergio often has characters or objects break panel borders, but here it's almost like a separate panel on a different plane from the rest of the page. It's an interesting technique.

Back in the area of jokes and whatnot, I liked this version of the recurring scene in which Groo tries to come up with an idea:

And in another bit of funny art, I liked this depiction of what Arba and Dakarba do when Groo goes to them for help getting his dragon to grow up quickly:

The final gag of the issue, what happens when Groo finally brings the dragon to the town, just in time for the annual performance, is another great bit of comedy, a perfectly-timed surprise moment that gives Sergio a chance to do some really funny cartooning. I won't spoil it though; it's worth the anticipation of reading the story and getting to that last reveal. This Groo Crew is a bunch of comedy pros, and by this point, they definitely know what they're doing.

This issue's stats:
Recurring characters: Arba and Dakarba, and a Groo-Grams banner that contains pretty much the whole supporting cast:

Hidden message(s): I didn't spot one, although there are some books in Arba and Dakarba's lair with titles like "Trina's Magic", "La Magica Leialoha", "La Vida y La Muerte", and, of course, "Mad".
Moral: "A substitute is never as good as the genuine article."

Spanish words: The town of Gafas is named after the word for "glasses".
Running jokes: Groo says "Did I err?" In a callback to a joke from issue #47, Groo tries to find someone who can help him with some magic, and Rufferto tries to point him in the direction of Arba and Dakarba, but Groo thinks of the Sage instead.
Mark Evanier's job(s): Enabler
Letter column jokes: The majority of this month's column is taken up by letters that Stephen Philpin and Garrett Mulder sent in, with each of them asking to have their letter printed before the other. Mark prints Stephen's letter first, since it will make Garrett mad, but thinks he might switch them around when Garrett threatens to have a duck follow him everywhere armed with a bucket of cheese dip. Another letter from Stephen convinces him to go with the original order to demonstrate his decisiveness. Stephen and Garrett also comment that they've discovered that Mark's real name is Zigfried, which Mark adamantly claims isn't true, even when he responds to the column's other letters, so this definitely kicks off another running joke in future issues. Spanky Belew writes in to tell somebody at Marvel how much he enjoyed Champions #17, hoping to finally have his praise for that issue printed somewhere (he had previously tried sending letters to Spider-Man, Captain America, Avengers, and even some non-Marvel titles); he also asks the name of the character in Groo with the big nose. Mark says he doesn't know, and he never figured out who the Champions were either, even though he "wrote half an issue of them once". Finally, this month's Grooism comes from Michael Collofello (from my backyard of Joliet, Illinois!), who relates a time he and his brother were talking about people in the future living on the moon, and his brother said, "I wouldn't live on the moon if it were the last place on Earth!" That's definitely worthy of a nonexistent certificate.
Posted by Unknown at 6:00 PM