The Neverending Fray: It's a shaman, not a superhero named Sha-Man 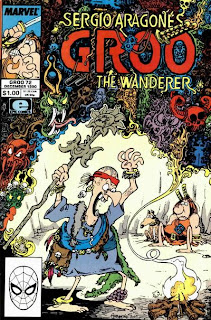 This issue has a pretty classic Groo story structure, in which somebody plans for Groo to do something Grooish, but he confounds expectations and ends up causing their ruination. In this case, it's a creepy shaman who bears a striking design, with lots of ugly tattoos, a beak-like nose, a snaggletoothed mouth, a weird staff, and some hermit-style tattered rags. He gets upset at a town when they refuse to allow him to bilk them out of money by asking them for tribute payments to stave off a disaster that he predicts, so when he runs into Groo, he sends the wanderer in to wreak havoc on them. But as we know so well, to the point of predictability, planning for Groo to do something always brings disaster, and sure enough, he becomes a hero by driving off some other invaders, and even though the shaman directs him to cause all sorts of other disasters, they all somehow result in him saving the day and becoming a hero.

This is all kind of rote and obvious for Groo (but no less funny than usual), up until there's a bit of a twist when the shaman gives up on ever getting Groo to ruin the town. At that point, the role of the person planning on Groo doing something beneficial shifts to the town itself, which Groo immediately destroys, albeit in a manner more related to societal chaos and institutional oversight than the usual physical damage. It makes for a nice bit of irony, and another reminder that Groo is destined to bring ruin to all that he touches.

As a character who shows up to encounter Groo for one issue, the shaman works well enough, but it's obvious why he didn't stick around in a recurring role, since he just does what most supporting characters do, which is interact with Groo and meet failure. He does have some interesting qualities, providing a bit of a critique of religion/superstition when he says things like "All I am trying to do is to bilk them of all their worldly belongings! And they act as if that were a crime--!" And I like his alliterative attempts at curses, when he says things like "May you have boils on your behind!" or "May you have pimples in your pudding!" But he's not exactly a visual that one wants to see more of, and probably not one that is all that fun to draw either. The most interesting thing about him is probably the crazy demonic visions that he produces on the cover, but he only does that in one panel of the story (as some sort of hallucinogenic coercion, I think), and since it is established that he doesn't actually have any supernatural powers, there's not really much else that can be done with him.

As a one-issue character though, the shaman works, and he gives Groo some funny stuff to do, like when he is sent to "spread havoc and destruction" in the town, only to find that some marauders have gotten there first: 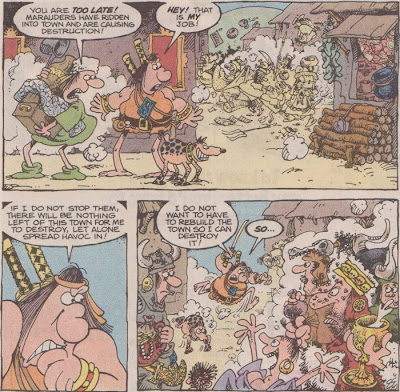 All in all, it's a pretty fun little issue, featuring all the usual gags and plenty of funny Sergio art. I especially like this moment, in which Groo and Rufferto try to help build a bridge: 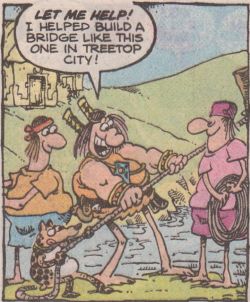 This issue's stats:
Recurring characters: None, but Alfred E. Neuman makes an appearance on the cover: 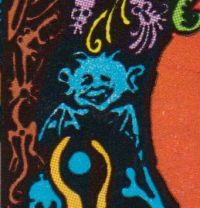 And here's a weird bit that I thought might be a Simpsons reference (which would have been interesting, since Sergio has been making Simpsons comics in recent years), when Groo topples an idol that bears a passing resemblance to Bart Simpson, revealing a nest of snakes that the townspeople beat to death with sticks: 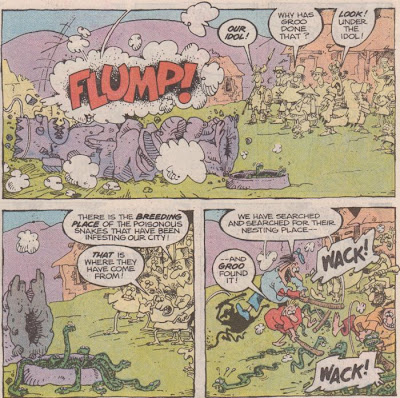 This sure seems like a nod to the "Whacking Day" episode of The Simpsons, but that episode didn't come out until 1993. I guess I'll just assume the writer was a Groo fan.
Hidden message(s): I didn't find it, although there is one panel in which the markings on the shaman's staff form what looks like a "TH", in which case the rest of the message might be visible in subsequent panels. I couldn't spot any more letters to complete something like "E HIDDEN MESSAGE" though. UPDATE: As kipper notes in the comments below, it can be found on the letter page by taking the first letter of each of the non-indented lines, starting with the second paragraph of the first letter:

Moral: "Even the worst guesser is right once in a while."

Spanish words: The Duke of Mayate appears to be named after a derogatory Mexican slang term for either dark-skinned people or homosexuals, derived from the name of a dung beetle. Yikes.
Running jokes: Rufferto bites several guys on the ass.
Mark Evanier's job(s): Wizard of Words
Letter column jokes: The ongoing joke of Mark plugging his Hollywood Superstars series reaches something of an apotheosis here, with the letter column covered up by a four-panel strip in which Sergio discovers that Mark has been moonlighting: 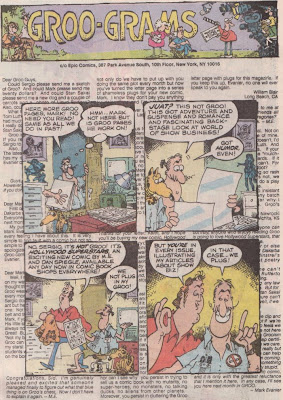 Note the Groo-Grams header, in which Sergio and Groo have been sidelined in favor of Mark being treated like a movie star. I don't know if the portions of letters that we can see are real letters or ones that were made up, but in one of Mark's responses to an obscured letter, he congratulates somebody named Sid for finally figuring out what the blue thing on Groo's chest is.
Miscellaneous: I've never heard of this NES game, but as far as I know, it has nothing to do with either the Street Fighter or Final Fight series: 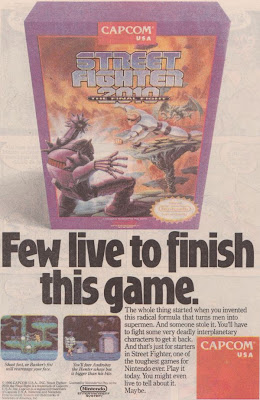 And I'm kind of creeped out by Mario and Princess Toadstool's intrusions into kids' baths to plug their hair care products: 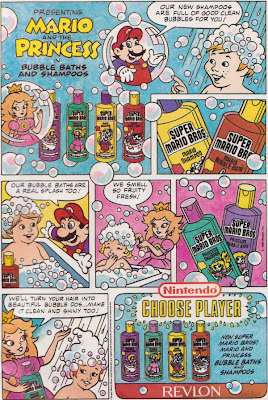