Art What I Like: One Piece Is Awesome, Example #1

When shonen manga is good, it can be sublime, pleasing that part of the brain that just wants pure action and adventure, presented in a dynamic, page-turning manner that provides excitement and laughs. Eiichiro Oda's One Piece does all that as well as, if not better than, any other shonen manga I've read, which is probably why it's pretty much the most popular comic in the world.

Here's an example of one thing that Oda does so well. He comes up with some pretty ludicrous concepts, as in this scene from the fourth volume of the series in which one of the good guys, Zolo, who fights using the "three-sword technique" (he holds one in each hand and one between his teeth), is facing off against a pair of ferocious cat-themed pirates. But as silly as all this is (and it's really only the tip of the iceberg when it comes to this series), the goofy concepts are treated completely seriously in terms of physical, life-threatening danger. So, when Zolo and the cat brothers charge at each other, this happens: 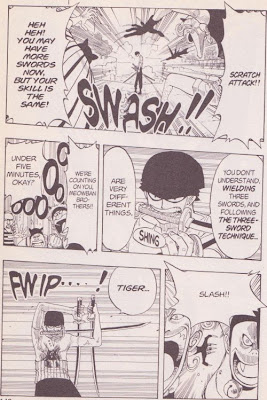 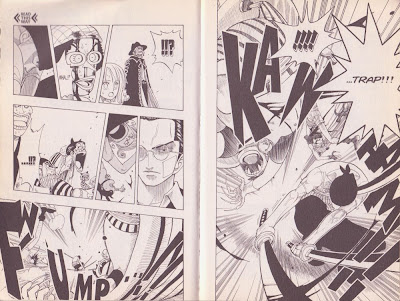 I love the timing there, with the second page coming after a page turn, so you see the ferocity of the attack and how it has sent the characters flying in an explosion of speed lines. And on the facing page, we see all the other characters observing the fight, their expressions frozen as the brothers fly through the air before crashing to the ground painfully.

It's only three pages out of a fight that takes up nearly two volumes, but it's a perfect example of how much Oda sells every moment, providing tons of laughs with his wacky concepts or exaggerated character reactions, but still managing to thrill with action that leaps off the page. It's awesome.
Posted by Unknown at 6:00 PM