The Neverending Fray: In which I learned that it's possible for Groo to be even more brainless 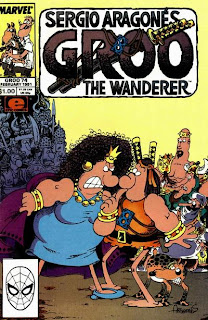 This issue continued my introduction to the world of Groo, and while as a whole, it suffers a bit from "middle chapter syndrome", it's got plenty of funny stuff, especially the opening page, in which Sergio and Mark speak directly to readers to recap the first chapter of the story: 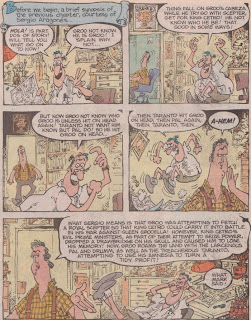 This scene makes for a great introduction to the kind of meta-world of the series, with Sergio and Mark playing characters themselves, acting in the roles of the wacky artist who barely speaks English and his sarcastic, erudite partner, the two of them functioning as ringmasters to the crazy circus of the comic. I do remember asking the friend who loaned me these issues who this Mark guy was; Sergio is obvious enough, since his name is right there on the cover of each issue, but Mark's role was less obvious, since he only gets acknowledged with silly jobs in the credits and as the guy who answers the letters in the letter column. I figured it out soon enough, which is good, because these sorts of introductions became a regular thing, especially after the book expanded in later issues, eliminating ads and including an introductory strip on each inside front cover.

As for the story itself, it features more amnesia-related shenanigans, as Taranto and Pal struggle to control Groo, hoping to either steal Rufferto or seize control of King Cetro's kingdom, respectively. Rufferto gets a good gag in which he tries to restore Groo's memory, only to further injure the poor fellow who was unlucky enough to accompany Groo on a mission: 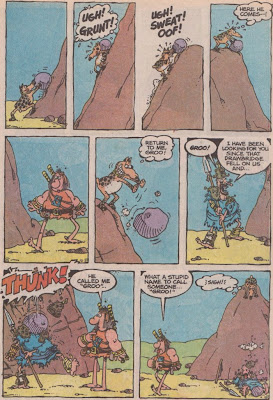 And this also leads to a good gag based on Drumm calling Groo a mendicant: 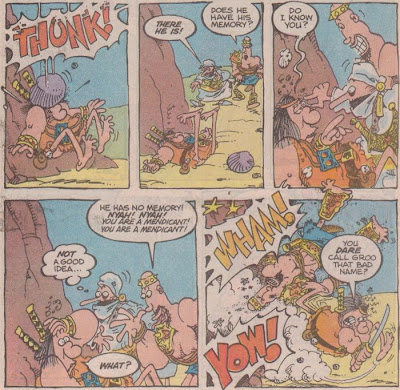 Grooella also gets a little bit bigger of a role here, leading the army that is fighting against King Cetro (and contributing to an amusing running gag in which both she and Cetro say that while his men are out of food and water, the worst thing they have to face is being uninspired due to the lack of his royal scepter) and eventually running straight into Groo, who, in what seems to be the true objective of this storyline, gets crowned king of Cetro's kingdom. Groo being in charge of anything is a good starting point for comedy, so putting him in charge of an entire kingdom seems like guaranteed laughs, although we won't get to see the true results until next issue.

The other interesting thing about this story is the treatment of Groo's amnesia, or rather the character of "Amnesiac Groo". This could have been played as a sort of opposite personality, with him suddenly becoming smart and/or refined, but maybe that would have been too goofy and "unrealistic". Instead, he has pretty much the same level of intelligence, but without Groo's particular personality quirks, style of speech (he can't refer to himself in the third person when he doesn't know his name), likes or dislikes, fighting skill, temper, or much of anything to distinguish him from a random stranger who just happens to wear orange and carry samurai swords. In fact, he seems pretty boring, aside from when he ends up endangering other characters, but this does provide a good cliffhanger, as he orders Grooella to be beheaded when she disrespects him, the king. That's probably the best example of how different his personality is, since normally he's friendly and generous to every familiar face, no matter how they have wronged him in the past, so it's striking to see him so callously order the death of his sister. Will he go through with it? Tune in next time to see!


Next: We find out whether Grooella loses her head in "The Scepter of King Cetro, Part III".
-----

This issue's stats:
Recurring characters: Taranto, Pal and Drumm, and Grooella, plus Sergio and Mark. And a statue of Usagi Yojimbo can be seen among the decorations in Sergio's studio:

Hidden message(s): It can be found within the plaid pattern on Mark's shirt in this panel: 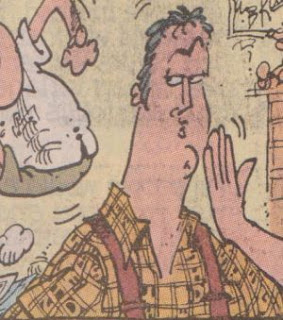 Moral: Still no moral, since the story isn't over yet.

Spanish words: In addition to King Cetro (whose name means "scepter"), Sergio says a bunch of Spanish words in his broken English, including hola ("hello"), dos ("two"), and cabeza ("head").
Running jokes: I didn't mention this last issue, but the title of the story was listed as "Part I of Three (or four...we'll see how it goes...)". That joke continues this month with a "Part II of Three (we think)". The poem on the title page mentions that Groo sinks a lot of ships. Groo's amnesia provides an opportunity to bring back the old joke about him possibly eating Rufferto. Somebody mentions the blue thing on Groo's chest, which is sort of a reference to the regular letter column queries about it. Drumm gets excited about calling Groo a mendicant, and is promptly pulverized.
Mark Evanier's job(s): Jongleur (a medieval French term for "juggler")
Letter column jokes: This issue's column is devoted to "strange letters", which are the weird, nonsensical bits of absurdity that many readers send in. These include Martin Mix threatening to publish his own letter if Mark doesn't (and calling Mark Zigfried as well); Dan Stephens claiming that Groo's nose is depicted 1,018 times in The Groo Chronicles; Justin Horn claiming to be psychic, proving it by predicting that Mark won't print the letter, and trying to influence Mark to cover Sergio's car in Vaseline and flour; Paul Allen saying he was going to enclose $50 for charity, but sealed the envelope before he could include it; Seth DuMONT predicting the rise of the Internet by contributing a letter full of intentionally incorrect spelling and punctuation and randomly capitalized words; Hutch Harris complaining about the letter in issue #66 in which somebody claimed to sneeze on elephants for a living, since he considers it a hobby and wouldn't dream of charging people; Diana Tepper saying that Groo is dreamily handsome, macho, and stylish and trying to convince Mark to make him a teen idol; and Mike Utley repeating the word "thingee" over and over.
Miscellaneous: Check out this guy's awesome early-90s style: 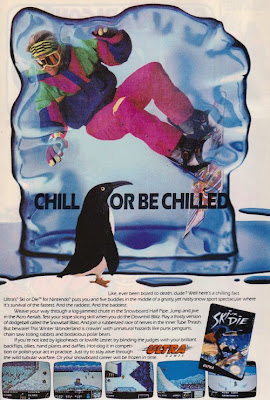 Hey, wait a minute! A snowboarder featured in a gamed called Ski or Die?! As a lifelong skier, I find that very offensive.
Posted by Unknown at 6:00 PM