The Neverending Fray: Who's crazier, Groo or Klaus Kinski? 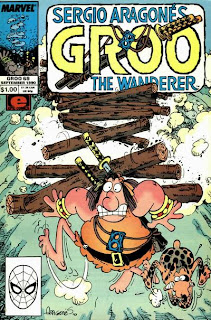 I strongly suspect that the Groo Crew was influenced on this issue by the Werner Herzog film Fitzcarraldo, in which a 19th century businessman hauled a ship over a mountain in order to access a remote part of the Amazon river. Although the movie was based on a true story, that idea is perfectly suited for Groo, being a preposterous-seeming scheme featuring the non-intuitive idea of a ship being transported over land and the possibility of all sorts of destruction and chaos. The results, however, are only so-so, but that might just be because the visuals here can't match the spectacle of the film, in with Herzog basically recreated the events himself and hauled an actual ship over a mountain in order to film it.

Comparisons to other media aside, this issue has plenty of fun stuff, with Groo getting involved in a race between two ships to win a lucrative shipping contract, even though neither crew wants him on board their vessel. He ends up being paid by the owner of one ship to stow away on the other, and wouldn't you know it, good old Captain Ahax is the man in charge, which leads to one of those delayed reactions that Sergio does so well: 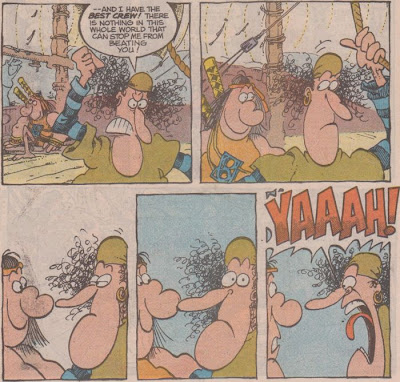 Ahax is sure that Groo will sink them, but the ship's owner has been informed that the Wanderer is "a brilliant skipper and a seasoned seaman," so he decides to follow Groo's idea of bypassing the journey around a cape by traveling over a small strip of land to get to their destination. And that's what they do, but as neat as this idea is, not much comes of it; if anything, the story kind of grinds to a halt here, just waiting for a final moment in which Groo can manage to ruin everything. He does, of course, in an entertainingly destructive manner, but what should be the most interesting part of the story is actually much less funny that everything leading up to it, and without the impressive Herzogian spectacle of the overland journey itself, there's not much left. This is about as thrilling as the journey gets:

It seems like a missed opportunity for Sergio to really deliver on what should be a jaw-dropping sight.

That can be a flaw of this sort of issue, in which the creative team came up with a neat idea to base a story around, but weren't able to do much other than just present that idea, failing to capture the normal energy of the series while it's playing out. This isn't a common circumstance, but it does happen occasionally, as if the particular alchemy that makes the plot, characters, and jokes all gel into something special just doesn't fully cohere. Oh well, I guess they can't all be complete winners. But they won't be complete losers either, as long as they provide moments like this: 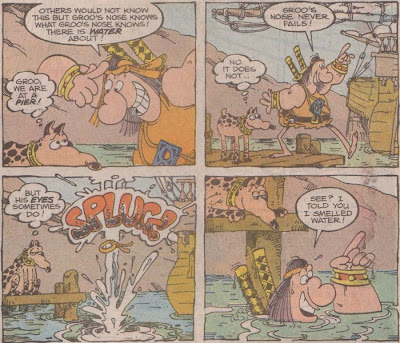 Next: Mark Evanier and Stan Sakai join the supporting cast in "The Greatest Hero".
-----

This issue's stats:
Recurring characters: Captain Ahax, and Mark and Sergio show up in the Groo-Grams header:

Hidden message(s): The owner of the ship has a necklace bearing a letter that changes throughout the issue, with the letters combining to read "hidden message":

Moral: "The shortest distance between two points is not always the safest."

Spanish words: The town of Salida is named after the word for "departure", and ships leaving there are destined for the aptly-named city of Puerto, which means "port". Groo's ship is amusingly named Hundido, which means "sunken", and its rival ship is named Veloz, or "fast".
Running jokes: In a story with ships in it, Groo sinks at least one, and he says "Did I err?" after doing so. He also mentions that he is good at choosing canyons, which is a callback to issue #65, and he suggests finding a dragon, like he did in issue #67.
Mark Evanier's job(s): Canalizer
Letter column jokes: Mark announces that Sergio was given an award at the 1990 awards ceremony of the National Cartoonists Society, and he also notes that his other employer, Jim "Garfield" Davis, won the Reuben award, which Mark thinks is good, since it might lead to more work for him, and he could use the money. The letters for the month end up following a theme, that being cheap threats. Iain Tonner threatens to blow up the Groo-Grams page, and starts counting down from 10, but only gets to 7 before Mark acquiesces. Patricia Vaz says that Groo stole her dog, who is not named Rufferto, but the much more original "Spot". She threatens to slay Groo for doing so; Mark suggests notifying her next of kin first. Brian Wojckik gets upset at Mark for "soil[ing]" the February 10th (1990, I assume) episode of Garfield and Friends by mentioning cheese dip as a flavor of yogurt, and says he should be "flayed, eviserated, and impaled." He also adds a postscript telling Mark to print the letter, or he should also be quartered. "Gary and Steve" write to tell Mark they have his dog and he should send money. In a series of threats based on gaining Groo-Grams fame, Scott Novotny says he'll shoot his letter if it isn't printed, Mark Schelvan threatens to "buy your comic" if his letter isn't printed, And Jay Woziack threatens to eat a cheeseburger, then decides he's going to eat one anyway, so they don't need to bother printing his letter. Blair Krauter contributes the issue's Grooism, relating a time when some friends were walking by a fence which had a sign reading "Barbed Wire!" One person said the sign was stupid and unnecessary, and another replied "Well, there are blind people you know!" Finally, Mark closes out the column by plugging his upcoming series Hollywood Superstars, which was illustrated by Dan Spiegle (with Sergio also appearing in every issue in some aspect) and is about some of Mark's experiences in Hollywood. I've never read it, but it might be something worth checking out if I ever find it in any back issue bins.
Posted by Unknown at 6:00 PM