The Neverending Fray: I had to start somewhere 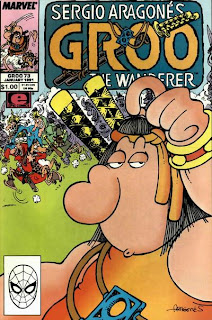 For me, this issue marks the beginning of an obsession: it's the first issue of Groo that I ever read. A friend loaned it to me, along with the next two issues, which formed a complete story, and I was immediately hooked, finding the inspired goofiness of the story hilarious, especially the way it was centered around a protagonist who was unbeatable in battle, but also remarkably stupid and prone to charging off into unpredictable adventures and encountering all sorts of complications along the way. The non-stop wackiness, chaotic violence, and occasional wordplay appealed immensely to me at that age (I think I was around thirteen), and I've been glad to find that my appreciation of the character, the world the creative team has build around him, and the incredible artwork has only increased with time.

In retrospect, this story is a good one for somebody who is new to the series, as it features many of the series running jokes, has plenty of scenes of Groo rampaging through vast hordes of soldiers and thugs, and includes several supporting cast members and references to previous stories to suggest a rich world surrounding its main character. Plus, it's really, really funny, featuring the Groo Crew's take on one of the hoariest of cartoon cliches, amnesia caused (and fixed) by a bonk to the head. This happens to Groo when, after charging into a battle and randomly attacking both sides at once, he is recruited by the king leading one of the armies (we find out later that the other army belongs to Groo's sister Grooella, although she doesn't really get involved in the story until the next issue) and sent to retrieve the king's royal scepter. But after acquiring his cargo, the king's scheming advisors pull a pretty classic cartoon gag: 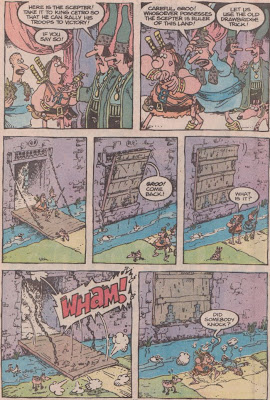 And the adventures in amnesia begin. Soon enough, Groo happens across Pal and Drumm, who, after testing his identity by calling him a mendicant and seeing how he reacts, determine that this can't be Groo. Rufferto, meanwhile, runs into Taranto and his gang, and since he's carrying Groo's swords (which his master had discarded while in the throes of identity crisis), they assume Groo is dead and decide to return the dog to his former masters and collect the reward for his fancy jeweled collar. When they all run into each other, they decide to enact further money-making schemes by passing what they think is a Groo look-alike as the real thing, but after charging a village to prevent Groo from destroying it, they make the mistake of allowing him to be bonked on the head again: 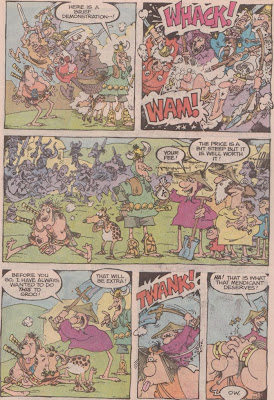 When they all realize that this is actually Groo, the real craziness begins, with Taranto trying to remove Groo's memory so he can take advantage of him and Pal finding out about the king's scepter and trying to restore his memory so he can seize it and gain control of the kingdom. Which leads us to the issue's hilariously slapsticky last page: 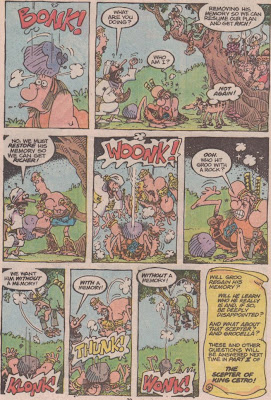 There's something about the cartoon violence of that sequence, with the main character of the book suffering from massive head trauma and the resultant brain damage without actually being damaged beyond a bit of a daze, that brings a good portion of the series' humor into focus. Groo is dangerous, slaying many people throughout this story and standing up against multiple armies of soldiers without receiving so much as a scratch, but as we see here, it's all just cartoon violence with little in the way of consequences, so while it gets established that people's lives are constantly being disrupted by Groo's actions (and everything thing else that goes on, like constantly warring kingdoms and bands of roving thieves and marauders), it's kind of all in good fun, with nobody actually being killed (even the piles of Groo's victims, which he says he has slain, are usually shown as injured rather than dead) or permanently injured. Except, that is, when it's funny, like with this guy who was also injured in the drawbridge incident:

The Groo Crew manages to walk a very fine line here, making the violence "count" only when necessary, either to sell a threat as something to be feared, or just when it can evoke a laugh. But as much as the danger is downplayed, it's still real enough to bring a visceral feeling of fear and tension to scenes like this one, in which one of Taranto's men is tasked with calling Groo a mendicant in order to prove that he isn't Groo:

There's plenty more really funny stuff in this issue, like Drumm repeatedly calling Groo a mendicant, since he can get away with it for once, only to meet the obvious result when Groo regains his memory: 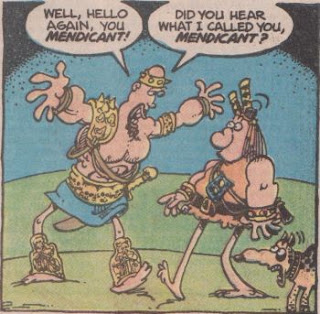 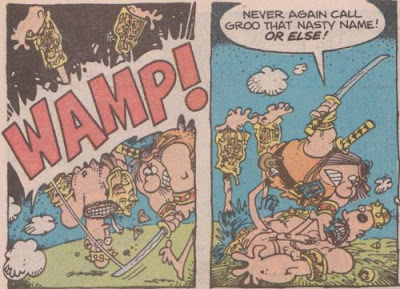 I always like the silhouettes Sergio does, and this one is no exception, as Groo and Rufferto just completely wreck a bunch of people in the background while Taranto catches up with the plot in the foreground:

And I've always been partial to this scene, in which Groo tries on the helmets of the opposing sides of the armies, which provides the benefit of being attacked and giving him someone to slay: 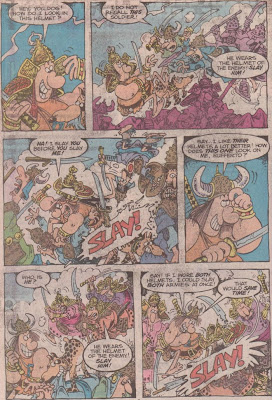 Maybe I'm biased because this was my first issue of Groo, but it, along with the rest of its multi-part story, is probably one of the best of the series' entire run, offering a sample of almost everything the series does so well and spurring readers to come back for more. It was the beginning of an obsession for me, and I'm glad to say that my continued attempts to obtain more, ever more, of these silly comics that follow such a lovably mindless force of destruction have been worth all the energy I've spent on them over the years. I don't think I'll ever get tired of reading about Groo, and if I ever want a reminder of why, I know exactly the issue to read.


Next: The nostalgia continues with "The Scepter of King Cetro, Part II".
-----

This issue's stats:
Recurring characters: Taranto, Pal and Drumm, and Grooella.
Hidden message(s): It's formed by the designs on Pal's scabbard in this panel: 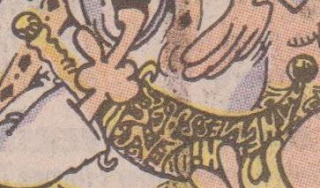 Moral: No moral this month; we'll see if the final installment of this story has one.

Spanish words: King Cetro is appropriately named for this story's macguffin, since his name means "scepter".
Running jokes: Almost all of the series' various running gags get crammed into this issue, starting on the first page, when Groo recognizes a pleasant smell and thinks it might be either cheese dip or mulch (it turns out to be the smell of a fray). Rufferto bites several guys on the ass. Groo gets called a mendicant by a bunch of different people. Drumm says he is Pal's friend, "even if you did not buy me a house!" Later, he thinks "What pirates?"
Mark Evanier's job(s): Enhancer
Letter column jokes: This issue's column is dedicated to Grooism contest entries (none of which ever received their promised certificates, even though Mark claims they'll get them as soon as he and Sergio get around to designing them). Ben Chamberlain tells of a time a teacher of his told a story about her parents being killed by guerrillas in "some country engaged in civil war"; a classmate raised his hand and asked "Did they kill you too?" Chuck Dillon mentions a time he ordered a small milkshake at a fast food restaurant, and the cashier said, "We only have one size, so what size do you want?" Benjamin Truesdale offers a suspiciously familiar story of a classmate who was doing a report on ancient Greece and said such silly things as "Homer wrote The Oddity" and "Socrates died from an overdose of wedlock." Jamie Mottola relates another classroom anecdote, in which a student responded to a query about the capital of Canada with "C". Michael Ho's classroom story features a teacher for a change, who, when doing a slideshow in which some slides were in the projector sideways would turn the projector on its side, and when a slide was upside down, he turned the projector over, which caused all the slides to fall out. Andy Boudreau, who had already had a Grooism featured in issue #56, writes in with another funny thing his friend's wife said: after locking her keys in her car, her husband showed her how to break in with a coat hanger, and she said, "Hey, that's neat. I can keep the coat hanger in the trunk in case I lock my keys in the car again!" Andre du Tait tells of a cousin who was taking a cooking class, and when instructed to add a teaspoon of water to a recipe, asked "Is the teaspoon of water heaping or level?" Finally, Corwin Bleys implicates himself by mentioning a time he and a friend saw a commercial during a college football game saying that one of the schools was a Top Ten University, and he asked, "I wonder how many Top Ten Universities there are?"
Miscellaneous: More video game ads: this NES peripheral really seems like it wouldn't work very well, based on how hard it would be to aim and how presumably poor any voice recognition would be (and if the picture is any indication, it makes you really sweaty): 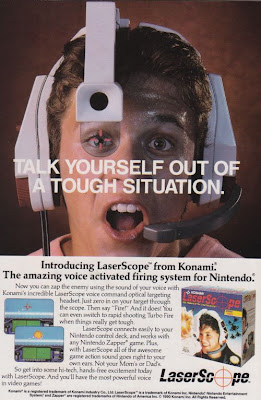 But I love this silly ad for the full-contact basketball game Arch Rivals: 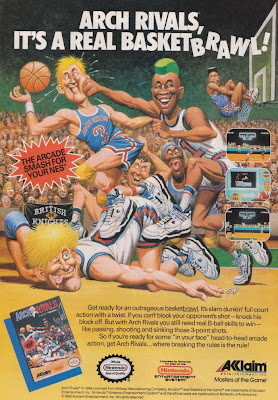 Just look at how happy those guys are to get beaten up! And that guy's green mohawk! And that the team is named the British Knights! And what is that guy doing with the hoop? So many questions!
Posted by Unknown at 6:00 PM