The Neverending Fray: They're all gonna laugh at you! 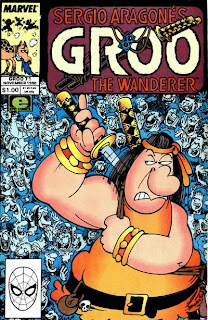 This issue presents the flipside of the previous month's story, in which Weaver the writer, shamed by his failure to sell Groo as a heroic figure, realizes that he can salvage his reputation by holding Groo up as an object of ridicule, writing a comedy book about the wanderer's many screw-ups. And sure enough, he finds great success, although as we know, one should never base any plans whatsoever around Groo, since he'll find some way to make them pay for it. And he certainly does so here, although it's a bit of a twist on the usual version of events, in which he does something unexpected and ruins people's plans; this time, he acts exactly as one would think he would, showing that people's perceptions of him as a bumbling fool are not exactly correct. No, where they expect a silly clown, he's more of a force of pure destruction, unleashing a fabulously exaggerated torrent of chaos upon request (after an exquisitely timed delay that even includes a sort of sidelong, "Can you believe this?" glance at the reader): 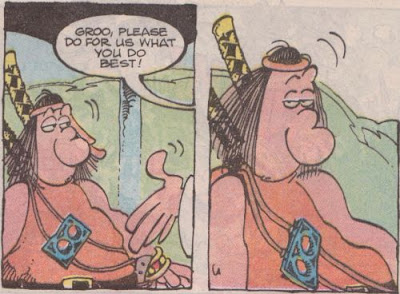 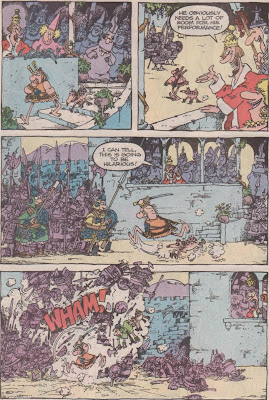 I love the sheer exuberance of the destruction, with soldiers flying 20 feet in the air upon Groo's attack, and the sequence going on longer and longer, with the scale of destruction getting larger and larger, and ending with a hilarious image of Groo standing on top of a huge pile of bodies: 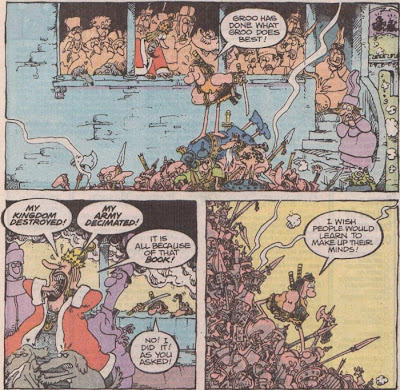 It's pretty amazing, and I can also see it as sort of an acknowledgment of the kind of humor that fills this series. This comic isn't just about making fun of a dumb character, it's about reveling in the chaos and destruction that follows him everywhere he goes. It sure wouldn't be fun to spend much time around him, but it's never less than entertaining to see what happens to those who do.

I also enjoy the characters of Weaver and Scribe here, with Weaver especially coming off as a self-important parody of a writer (a nice poke at Mark Evanier), someone who is desperately trying to make the world conform to his perceptions of it, and barely noticing what is actually going on around him, as in this great scene from early in the issue, when he is devastated by his previous book's failure: 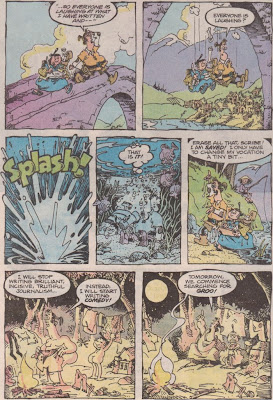 And Scribe is pretty great too, the ultimate dedicated servant who keeps following Weaver and faithfully transcribing his words, even in midair. I love the way Sergio gives him a minimal expressiveness, registering only slight surprise, concentration, or annoyance until he hears some really alarming news. It's lovely work, lovingly based on Stan Sakai as much as Weaver is on Evanier.

Yep, this is a good one, with plenty of humor that comes from Groo's words and actions, and especially from those who react to him. As a mission statement that Groo cannot be harnessed and made to fit someone else's perceptions of him, it's hard to beat.

Hidden message(s): It's written in this book that the king is reading: 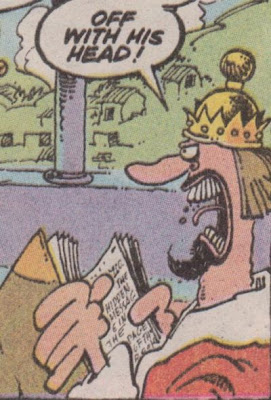 Interestingly, it appears to read "the hidden message in the page of the book", which makes me think that those were the instructions that Stan Sakai was given when lettering the issue, and he decided to take them literally.
Moral: "We laugh at stupidity because the alternative is to cry over it."

Spanish words: A sign points the way to "ahi", which means "there".
Running jokes: Groo thinks "Did I err?" and he gets called a mendicant. He also sinks at least one ship. Rufferto bites a guy on the ass. There's also a joke continued from last issue, in which Groo says, "A book? That is one of those things with words in it, is it not?" And Stan Sakai's inclusion necessitates an appearance by Usagi Yojimbo:

Mark Evanier's job(s): Semasiologist ("One who studies semantics")
Letter column jokes: In lieu of letters this month, Mark spends the entire column railing against the San Diego Comic Book Convention's decision to award the 1990 Bob Clampett Humanitarian Award to Sergio (he's so upset, he can barely bring himself to plug Hollywood Superstars). He finds the entire idea preposterous, and argues against it by providing the Webster's Dictionary definition of "humanitarian", which surprisingly includes "3. one uninvolved in the creation or production of stupid comic books, esp. Groo the Wanderer.", then describes what he imagines the decision-making process to be, suggesting that people argued for people who treat lepers, doctors who achieve medical breakthroughs, and people who provide for poor children, before settling upon the guy who draws Groo. He describes the awards ceremony, in which Sergio himself presented an Inkpot Award to MAD Magazine publisher William M. Gaines, accepted the award on behalf of the absent recipient, and spoke about Gaines in a very unflattering manner, making jokes about his weight, his stubbornness, and his legendary cheapness. Later, when the Clampett award was announced, Sergio was in the middle of signing something for somebody, and he enthusiastically joined in the applause before realizing that it was directed toward himself, then accepted by saying "If I had known I was going to get this, I wouldn't have said all those rotten things about Bill Gaines." It's a good story, and the way Mark draws it and his mock outrage out to fill the whole column is a great fit for the played-up antagonism that exists between the series' creators in these letter columns.
Miscellaneous: I like the claims of amazing graphics in this ad for the Game Boy game Gargoyle's Quest: 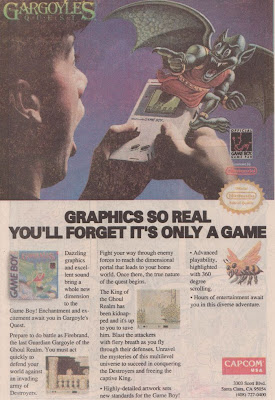