The Neverending Fray: Evanier has to get paid somehow 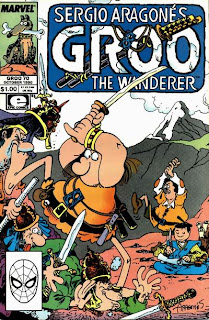 The members of the Groo Crew have made enough cameo appearances in this series that it was probably only a matter of time before at least some of them took the leap and became actual characters. And that's what they do here, in a funny story about a writer seeking to chronicle the exploits of a hero and being stuck with Groo as his subject matter. That would be a good enough idea for a story on its own, but casting Mark Evanier as Weaver the writer (and throwing in Stan Sakai as the mute, dictation-taking sidekick known only as Scribe) is a stroke of genius, adding a layer of knowing in-jokes to what is already a very funny issue of the series. One could even go so far as to read a further subtext into the story, with Weaver's attempts to bring some level of coherence to the stories of his unpredictable subject acting as a symbol of Evanier working with Sergio, but that's probably a step too far. Any commentary on real life is limited to one-off jokes like this one: 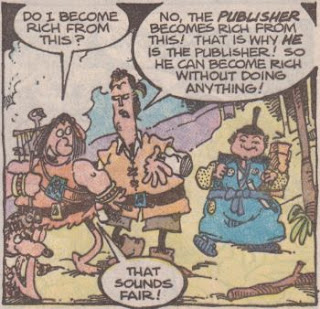 There are plenty of other good gags though, like Weaver's increasing frustration at the way Groo manages to stymie every positive description of himself: 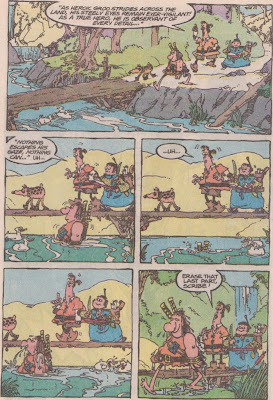 And when he decides to embellish Groo's actual deeds in order to make them sound more heroic than they actually are, it leads to what is probably the centerpiece of the story, several pages in which we see the images evoked by the descriptions of Groo's actions compared with the events as they actually happened: Everything builds up to the expected results, as Weaver's deception is revealed, and it's pretty darn funny. In fact, the whole issue is pretty great, with some excellent lines from Groo, as in this moment when he finds out Weaver is looking for him: 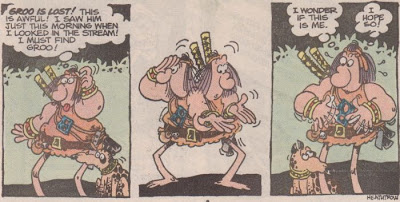 And I also love the opening splash page, in which Weaver and Scribe happen upon a battlefield where an army is recovering from being decimated by Groo, and it's a truly impressive sight, with dozens of injured bodies scattered everywhere, heaped up into piles, hanging from trees, and looking like a natural disaster has struck:

At this point in the series, it's not exactly an unexpected sight, but I like that we're getting a glimpse of it through the eyes of characters unfamiliar with the level of destruction Groo is capable of. It's a good reminder of the extent of the damage that is commonplace in Groo's life, and something of a justification for how much he is hated. Or, as we'll see next month, how he can inspire other reactions...

This issue's stats:
Recurring characters: Weaver and Scribe, who turn up at least once or twice more. And Sage shows up in the Groo-Grams header:

Hidden message(s): It can be seen being carved by this typesetter (typecarver?): 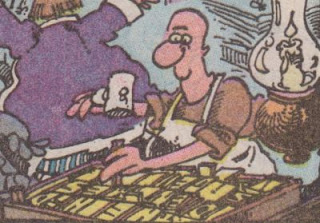 Moral: "Even when the words are true, they may not speak the truth."

Spanish words: None.
Running jokes: Surprisingly, this issue doesn't appear to contain any specific running jokes, limiting its humor to more general areas, like Groo being stupid or Groo wrecking bridges. But wait! There is one reference to Groo sinking a ship, so I guess that's the running joke for the month. Oh, and I just noticed that Scribe has some Usagi Yojimbo boxer shorts: 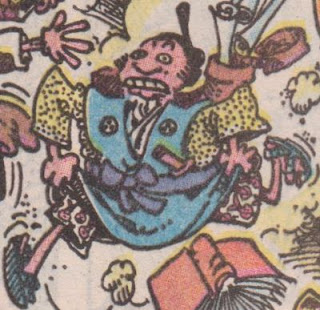 Mark Evanier's job(s): Model
Letter column jokes: Tony Marcello sends in an oddly-numbered list of questions (they are labeled 1, B, III, and Quatro) that includes who Groo's parents are, how old he is, what the pouch on his belt is for, and where he got the tiny skull on his belt. Mark replies by plugging the forthcoming graphic novel The Life of Groo, saying Groo is 31 zorgiks old, claiming that he keeps steel marbles in his pouch in case someone asks him to do a Humphrey Bogart impression, and noting that the tiny skull is the average cranium size of a Groo reader and also a memento of the last time someone numbered their questions oddly. David Edward Taeusch sends in his family's secret cheese dip recipe, but asks Mark not to tell anybody, lest his mother disown him. Mark says he doesn't need to worry, considering the series' sales figures. Razik Shaikh asks why the names of various European cities can sometimes be seen at the end of pages of the comic, and Mark explains that Sergio travels a lot and writes the location where he drew a page at the bottom, which is a lot cheaper than buying souvenirs. Erik Carvalhal Miller asks if there are any plans to make Groo closed-captioned for the hearing impaired, and Mark says those people have enough problems. Brandon Copeland contributes this issue's Grooism, in which he tells of a science class where students were learning about the equator, and one of them asked why someone doesn't just paint a line around the earth so they can stop saying the line is imaginary. And Mark finishes up by plugging Hollywood Superstars again.
Miscellaneous: Here's an ad for a Mission: Impossible game for the NES: 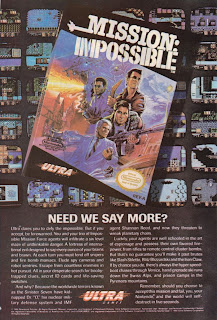 I didn't realize Mission: Impossible was still popular enough to be adapted into video game form as late as 1990, but there was apparently a revival series that ran from 1988-1990. Whaddyaknow.
Posted by Unknown at 6:00 PM