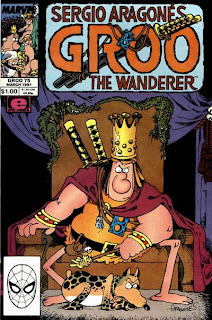 As the finale to my introduction to Groo, this issue works well enough, although approaching it as one issue of a long series makes it seem more decent than exceptional. It's actually kind of an odd finish to this storyline, ditching the regular amnesia-based shenanigans (after restoring Groo's memory in time for him to save Grooella from the beheading that he ordered) of the last two installments in favor of some jokes about Groo being a king, then throwing all the many pieces that played into the story into a box and shaking it up, ending in a chaotic reversion to whatever passes for a status quo in this series.

There are some funny bits here, like a scene in which Groo leads an army to rescue Rufferto, only to meet up with him before he gets a chance to do any rescuing: 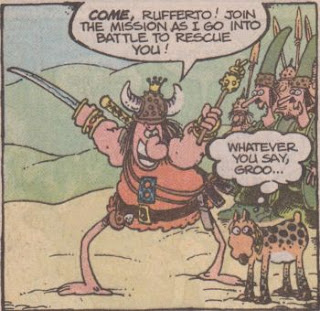 Or a fitting comeuppance for Pal after all the cranial trauma his schemes have caused Groo: 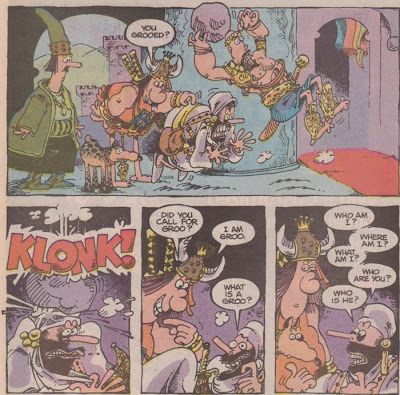 But most of the issue seems to be just moving things around until the story can reach and endpoint. That's fine, and a complicated plot with lots of moving pieces can be fun, but it's one of those cases where Groo himself can kind of get lost in the midst of all the business going on around him. Putting him in a position of leadership is a tried and true formula for laughs, but having him actually crowned as a king and then not really doing much with it (he issues one silly royal decree and runs around with an army without actually getting into any battles) seems like a missed opportunity.

Interestingly, since this was my first exposure to Groo, I think the supporting cast and the world around him made as much of an impact on me as he did, which is probably why I keep track of all the recurring characters that show up. But as I read through the series again, I'm finding that my favorite issues tend to be the one-offs that fit a simple story in a short space, prominently featuring Groo as he gets up to whatever nonsense he encounters that month. I still like to see supporting characters show up from time to time, but these sorts of big blow-outs with the entire gang tend to push him to the sidelines and limit him to looking on in confusion at whatever everyone else is doing, which I always find to be a shame. But that's the nature of a long-running series that provides its creators with plenty of material for all sorts of different types of stories. Not all of them will work equally well or tickle the fancy of every member of the audience, but the Groo Crew's success rate is so high, and the inclusion of always lovely art and at least a few laugh out loud jokes, that it's worth coming back for every opportunity for more. I know I'll be reading them as long as they keep making them, and it's all thanks to this story right here.

This issue's stats:
Recurring characters: Taranto, Pal and Drumm, Grooella, and Sergio and Mark, plus a brief appearance from Rufferto's original owners. And Sage appears in the Groo-Grams header:

Hidden message(s): It's upside down on this banner: 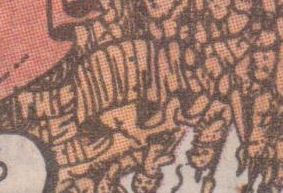 Moral: "The learned man makes a mistake but once...but the truly stupid keep practicing until they get it right."

Spanish words: King Cetro (whose name means "scepter") is still hanging around, and while it's not a word, Sergio has a thought balloon with an upside down question mark on the recap page, making for some Spanish-language punctuation.
Running jokes: Mark brings back an old joke in his appearance on the recap page by mentioning that he is going to have lunch at Canter's Deli. The gag about how many issues the story was going to take finishes up on the title page with a "Part Three of Three (looks like we're going to make it...)". Drumm thinks "What pirates?", and he's disappointed that he can't call Groo a mendicant because he is king. King Groo decrees that people can only eat cheese dip. When Pal loses his memory, Drumm tries to convince him to buy him a house.
Mark Evanier's job(s): Nicenellyist (nicenelly means "prudish" or "modest", so maybe Mark is trying to tone down Sergio's constant ribaldry)
Letter column jokes: Several people write in with Grooisms: Lee Good (who also stumps everyone trying to find hidden messages by listing his hometown as Neddih Egassem, WA) tells of a complaint from his boss about the phone in the office ringing too much by saying "It seems like every time I hear that darned phone, it's ringing!", Anthony Tucci mentions a time his boss began the day by saying "Let's get started so we can begin." and Jim Yates relates a time he had some jelly beans on his desk, and a coworker said "Don't let Kevin know you have these because he eats them like candy." Somebody calling himself "Kelek the Necromancer" refers to Mark as Ziggy (short for Zigfried, presumably) and asks a numbered list of questions that includes where he can buy back issues of Groo and Elfquest, what movie Groo has on his videotape, and why Groo doesn't wear shoes. Mark responds that Elfquest issues can be found at all the best comic book shops, and the other places carry Groo, and he says Groo doesn't wear shoes because there's no Foot Locker near him (and he also makes a very 90s joke about Groo having "The Pump" in his head), but most interestingly, he names Groo's video tape as To Kill a Stranger, which stars Donald Pleasence, Dean Stockwell, and Sergio Aragones. He also notes the existence of Norman, Is that You?, which stars Redd Foxx, Pearl Bailey, and Sergio Aragones, and says that if Warren Beatty made movies like these, he'd be drawing comics for a living too. Judah Konigsberg suggests having Groo meet somebody as dumb as him, and Mark says that they would, but he's too busy in Washington, and suggests filling in your favorite elected official. Keith Churchill asks why Spider-Man has five comics each month and Groo only has one, and Mark replies that it takes Spidey five times as long to screw things up. Finally, another Statement of Ownership (average sales: 88,983; sales of most recent issue: 91,000) makes its appearance without any comment from Mark, which is a shame.
Miscellaneous: In the "things you never expected to see" category, here's the Silver Surfer on a jet ski: 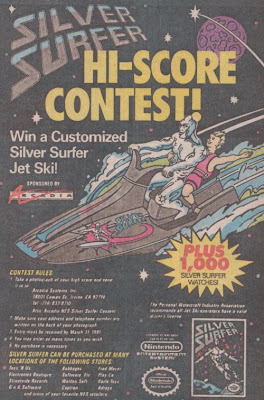