The Neverending Fray: Groo vs. nature 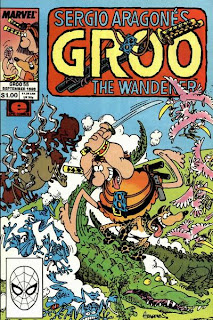 This issue falls under the category of satire/social commentary, in some cases a little less pointed than that sort of thing could get later on in the series, but in others being pretty spot on. Going by the cover, one could guess that this story is all about Groo wreaking havoc on an Edenic paradise, and that's certainly the case, although he manages to do so in a variety of ways, not just through the wanton killing of animals. After washing up on the beach of a tropical island, he sets about gradually ruining everyone's lives, mostly because he doesn't understand their peaceful, money-and-government-free, nature-coexisting ways. He upsets the delicate ecosystem first by burning down a field of grass, but then by trying to control the populations of animals that were affected, which leaves certain predators without prey, causing them to attack the populace or spread disease, and any further attempts to offset his mistakes (usually by wiping out some other species) just makes everything worse: 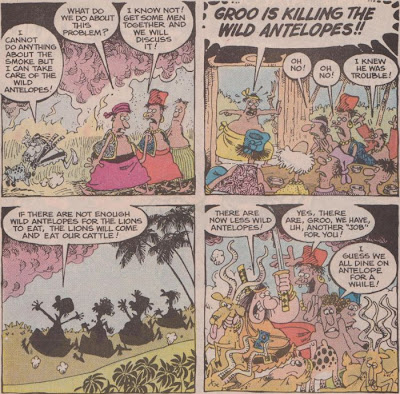 This all gets a bit complicated, with Groo's blunders causing chains of events that makes the island's ecosystem seem especially fragile and easy to disrupt, but what's probably even more effective is Groo's introduction of commerce and tribal rivalry, as he sets two different villages against each other, convincing them to build fences to keep each other out, which generates distrust and eventually sends them to war against each other. He also forces them to form governments, recruiting men to help him build the fences and demanding payment, which necessitates the collection of taxes and the need to vote to decide who should be in charge of these decisions. Before long, the island is a capitalist nightmare, its blissful state of paradise ruined, with Groo chased away and hated even though he "was just trying to improve things." It's a pretty amusing look at how foreign the values of Western civilization can be to "simpler" societies, and how corrupting those influences can be when forced upon said societies by outsiders.

Luckily, it's all pretty funny, as Groo blunders around in confusion, barely able to comprehend these people's way of life, but genuinely trying to help out, even though his attempts solve whatever problems he has caused through violence just make things worse. Even the stuff he kind of does right, like build fences, turn out pretty ridiculous:

It's a solid use of Groo's semi-fantastical world to make a point about ours, and that's the kind of thing I love about this series. I look forward to more of the same.

This issue's stats:
Recurring characters: I don't think he'll be returning, but a little island boy seems to be inspired by the Malaysian cartoonist Lat (which Wikipedia confirms): 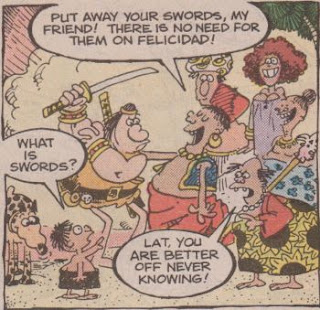 Hidden message(s): I didn't find it, but I'm sure it's in there somewhere. UPDATE: Issue #58 reveals the location, and good god, it's hard to see. It's carved on some decorative rods next to this house: 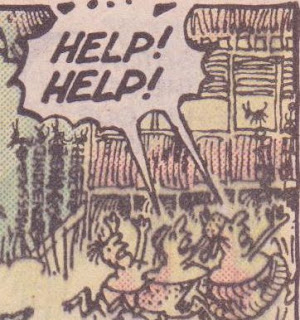 Moral: "Destroy the little and you destroy the large."
Spanish words: The island of Felicidad is named for "happiness".
Running jokes: In an example of a letter column joke migrating into the comic, little Lat asks what the blue thing on Groo's chest is (in fact, that's a one-issue running joke, with him asking about everything Groo mentions, culminating in the mid-battle question "What is aargh?"). Somebody gets disgusted at Groo's table manners. Groo thinks "Did I err?" and, in a variation on a regular catchphrase, says "You take us for the fools we are!" Rufferto bites somebody on the ass.
Mark Evanier's job(s): Ecologist
Letter column jokes: There are some decent jokes this month, with the most notable coming from a letter by B.K. Newcomb, who asks (in a numbered list of questions) who the babes who appear on the title page are (Mark says they're Sergio's excuse to write live models off on his taxes), why there isn't more blood and guts in Groo's frays ("red ink is too expensive"), whether Sergio has spots ("Yes, and when you connect them all, they form a picture of Tom Brokaw"), and whether this should be his last letter ("Yes. Or maybe stop one earlier"). Vivek Sharma, who was apparently the "Balloon Kid" from last month's column says he is writing his letter in class when he should be studying for a test the next day, which means Mark and Groo are causing juvenile delinquency, illiteracy, and the decline of the country. Surprisingly, Mark has no rejoinder, which seems to confirm his duplicity in this national emergency.
Posted by Unknown at 6:00 PM