The Neverending Fray: Groo vs. lots of boats 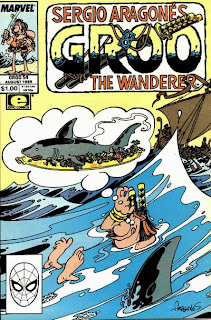 Putting Groo on a boat is usually a good recipe for comedy, since he's inevitably going to find a way to sink it. This issue takes that premise and gives Groo a whole fleet (two of them, actually) to go nuts on. It starts when Groo wanders into a harbor (commenting on a detail-packed title page that is filled with nautical detail, he says, "I think they have ships here!") and ends up getting recruited into the navy of a country that is about to attack its neighbor. But when the neighboring country finds out their enemies have Groo among their number, they decide to confront them, even though they have a much smaller fleet, counting on Groo's legendary boat-sinking abilities to even the playing field. Of course, anybody who plans for Groo to do something is inevitably doomed to failure, since he's always going to find some unexpected way to muck things up. And he certainly does, although having Rufferto along makes things unpredictable, since the dog has the opposite tendency, seeming to always keep ships afloat when he is aboard. This leads to a chaotic mess of a battle, in which nobody can stop Groo from jumping from ship to ship and indiscriminately sinking anybody and everybody: 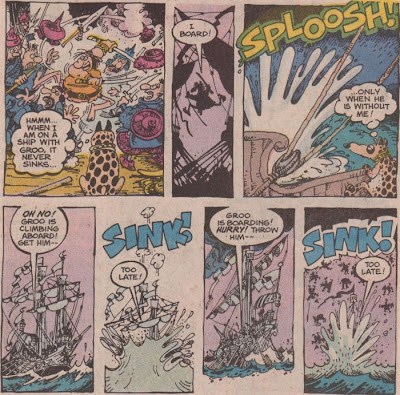 It's all rather amusing, with some nicely-timed gags: 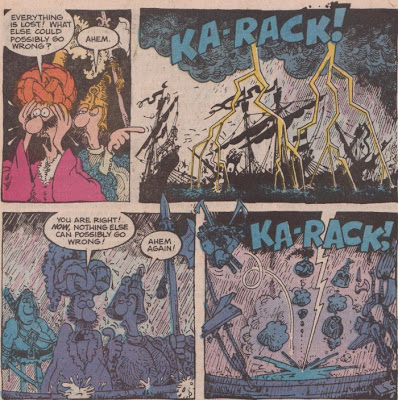 And some great art by Sergio, like this scene of some guys being struck by lightning, complete with the classic cartoon visual of their skeletons lighting up from inside their bodies: 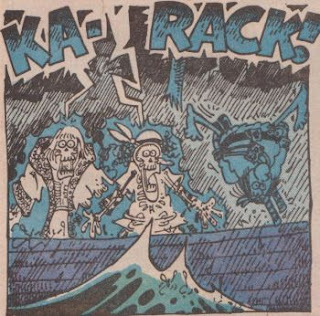 Aside from the boat-sinking, it's a pretty normal issue, with some good moments, like an admiral asking Groo how great a swordsman he is, and Groo saying "This great!" and just attacking all the soldiers around him. I also like this opening page, in which Groo outsmarts both Rufferto and himself when trying to figure out which way Chakaal went at the end of the last issue: 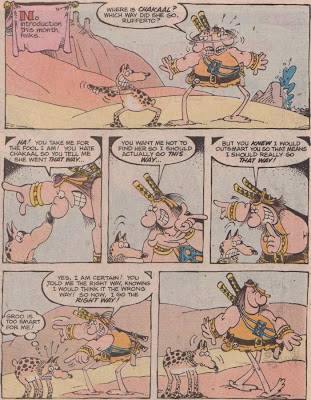 So yeah, good times all around. Groo plus boats is a pretty consistent formula for comedy.

This issue's stats:
Recurring characters: Captain Ahax! I think this is his first appearance since one of the Pacific issues that I don't have. He mostly just gets reintroduced here as a captain in the navy, sure that Groo is going to sink his ship, and then going kind of crazy once Groo sinks not just that ship, but every ship. He'll appear again before too long.
Hidden message(s): It's written in the wooden slats of this crow's nest:

Moral: "Just because you believe it does not make it so."
Spanish words: The lands of Tenedor and Cuchara mean "fork" and "spoon", respectively. And while the word "armada" has become common in English, it was originally the Spanish term for "naval fleet".
Running jokes: Groo says "You take me for the fool I am!" and "Did I err?" When trying to remember who Ahax is, he thinks "Maybe he is the Prince of Chichester...no, that is me..." And of course, the whole issue is based around the gag of Groo sinking ships.
Mark Evanier's job(s): Shipmaster
Letter column jokes: Mark lists some rules that readers must follow in order to get their letter printed, although only one or two of them are actually true. Those would be "don't ask for a sketch from Sergio" and "don't try the Steven Ebner tactic of sending in a poem every day until your letter gets printed. The others, "don't be funnier than us", "no mulch jokes", and "no intellectual content" are either facetious or will end up getting broken at some point in the series' run. Mark then prints letters that meet his rule, including one from Peter Kendall that takes a theory that one can get an idea of an artist's looks by studying their characters, and concludes that Sergio must be a horribly ugly creature that shouldn't be allowed to walk the earth. Somebody calling themselves "The Balloon Kid" sends in a letter consisting solely of laughter, which is pretty silly. Chris Hennessy asks why Rufferto has a black eye, and Mark says it "comes from asking nosey questions." Erik C. Miller's letter simply says, "Please don't print this letter." And Dan Wheeler contributes a letter full of non sequiturs, "singing" a Groo-themed version of the Rawhide theme, asking for more blood and violence, making bizarre statements about magnetic checkers and feeding cats, and laughing maniacally. What a weirdo (just like everyone else who reads the comic).
Posted by Unknown at 6:00 PM