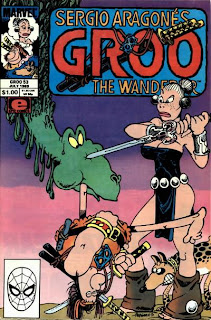 As generally seems to happen with guest stars who hang around for more than one issue, Chakaal has apparently run through her useful stories, at least for the moment, so this issue sees her and Groo finally part. Not by his choice though; even though she tries to get them to go separate ways, he quickly ignores her bidding, much to Rufferto's chagrin, which gives us a nice little meta-gag as the latter bumps his head on a panel border:

The two wanderers end up on one last adventure after they discover that somebody has been raising dragons and selling them to gullible towns to use as guard-beasts. That somebody? Pal and Drumm, who have traveled to a distant land in order to get away from Groo, only to stumble into his path, as usual (I expect the rest of the supporting cast will do the same soon enough). Chakaal and Groo set out to bring them to justice, and so, the rest of the issue consists of chases, dragon fights, and other such silliness, as Pal and Drumm set some dragons free to terrorize local villages so they can get away, Groo and Chakaal run back and forth chasing either them or the dragons, Rufferto gets in a fight with a dragon, Groo sinks Pal and Drumm's boat, etc. Good times, with some rather nice, expressive work from Sergio, as in this page in which Rufferto is being chased by a dragon: 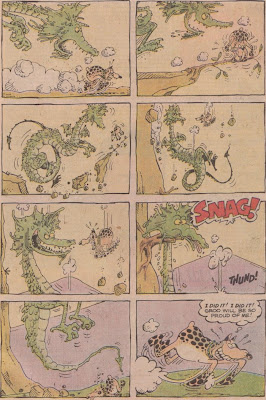 I love the way he smashes into the bottom of the panel there when he hits the ground. I also like this silhouette panel, which sees Pal and Drumm stranded on an island with their remaining dragons:

And this panel, in which Chakaal breaks some sad news to Rufferto, has a great reaction, with his spots leaping off his body in distress: 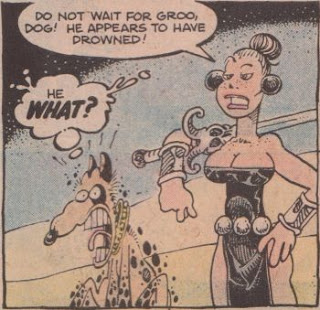 I continue to like Chakaal's characterization, especially her growing acceptance of Groo as a companion, even if his idiocy drives her crazy. Their final departure ends up being one of those misunderstandings where she thinks he is dead, but I wonder how long the Groo Crew could have kept them together before it got old. I also found this panel, in which she apparently finds Drumm attractive, rather interesting: 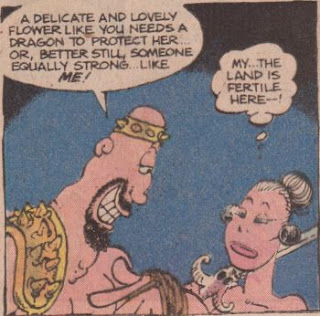 She does immediately dismiss him as an idiot, but it's nice to have an affirmation that even badass warrior women have desires. She's definitely a good addition to the cast, although I don't think she shows up very many more times.

Finally, the final page of the story is an especially nice one, working as a sort of callback to the end of issue #39, when Groo was reunited with Rufferto: 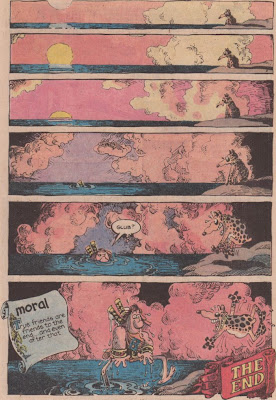 It's a rather nice moment on its own though, with those sunset colors giving it a warm glow that emphasizes the happy reunion. That Groo/Rufferto bond has really become the heart of this series. On to more adventures, you two!

This issue's stats:
Recurring characters: Chakaal, Pal and Drumm.
Hidden message(s): In this panel, the words "The hidden" are hidden in the designs on the sheath of Pal's sword: 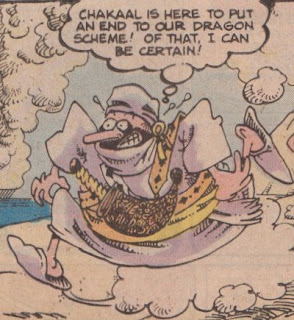 I don't know where "message" is, though. A couple pages later, it looks like at least some of the letters from the word might be hidden on Pal's sheath, but it's hard to tell, especially with the 25-year-old paper and printing quality. Oh well. UPDATE: According to issue #58, the message does continue on further panels in which Pal appears, so it looks like this one has the "Mess": 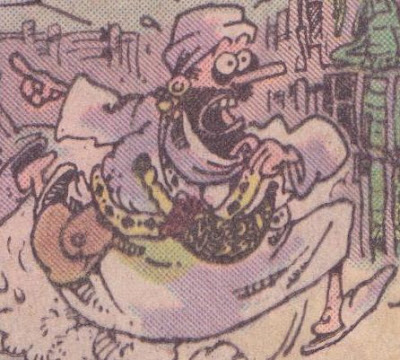 And this one has the "age": 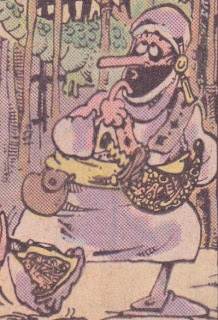 Moral: "True friends are friends to the end...and even after that."
Spanish words: None.
Running jokes: Groo is still asking Chakaal to marry him, and Rufferto still hates her. Groo says "Did I err?" and Pal says "What pirates?"
Mark Evanier's job(s): Dragon Wrangler
Letter column jokes: Reader Jeff Hill wonders why he hasn't seen any letters printed from somebody in Oregon, prompting Mark to say that they had received plenty of brilliant, fascinating letters from Oregonians, but were waiting for one as pointless as Jeff's. He then goes on to demonstrate how to get your letter printed in Groo-Grams, providing several examples, including a bit of nonsense from Steve Altiere who calls the comic a disgrace and says it makes him want to eat avocados, a request from Chris Teather to tell his wife to do her share of the ironing, a question from Gene Yu about whether Mark writes for the Garfield and Friends cartoon that allows Mark to plug one of his other projects, a note from Paul Freeman that agrees that Sergio should cut down on Minstrel appearances and save Mark from writing so many poems, a threat from Tom Hammond to drown Mark in cheese dip, mulch, and goat horn stew if his letter doesn't get printed, and, finally, a good straight line from Lon Wolf, saying that he has been reading Groo for a while but only recently heard that it was a humor magazine and wonders if that is true. Next month, Mark will demonstrate how not to get one's letter printed, which will presumably result in a column full of people asking for sketches.
Miscellaneous: This is one hell of a weird toy ad: 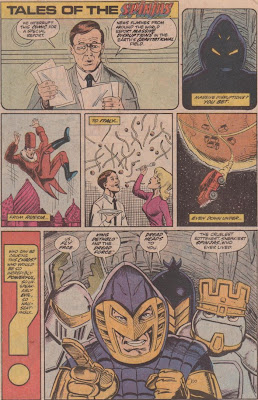 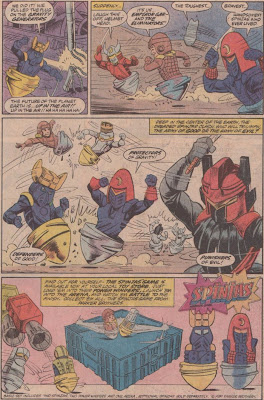 I guess this was the 80s, when all toys needed elaborate backstories that would hopefully lead to tie-in cartoons, but this is just all over the place. Gravity-controlling evil ninjas in the center of the earth, spin-fighting, flying spaghetti, it's just nuts. Now I wish I had some.
Posted by Unknown at 6:00 PM