The Neverending Fray: Not exactly Groo vs. Spider-Man... 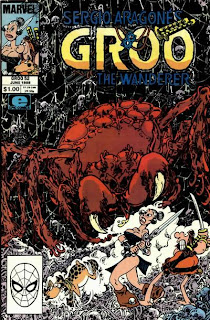 Now here's a darn good issue, full of all the requisite jokes, a good conflict for our "hero" to face, a plot that features a guest star without sidelining Groo, lots of fun action, and some excellent monster art by Sergio. It's a pretty ideal issue of Groo, if you ask me. As you might guess from the cover, the plot involves Groo and Chakaal fighting a giant spider called the Araña, which they do in order to keep a village (which is unintuitively situated right next to the beast's lair) from offering human sacrifices to it. There are many good jokes, like Groo's continual failure to grasp why Chakaal is so upset about the ignorant practice of human sacrifice (which isn't all that ignorant here, actually, since it keeps the spider from attacking the rest of the village, although their practice of kidnapping sacrifices from a neighboring village is pretty immoral). He gets some great lines in:

And so do the people around him: 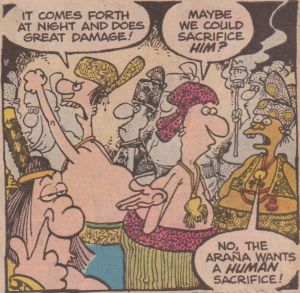 The plot that he and Chakaal eventually come up with involves getting the spider drunk, but that all comes from Groo imbibing too much during a village meeting, which gives us the treat of seeing him act even dumber than usual due to inebriation, including an attempt to bond with the spider: 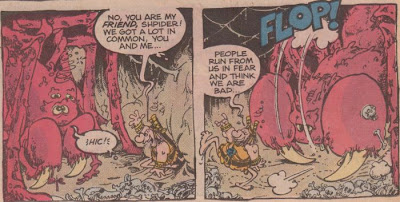 And really, I think I just like Groo's drunk face in general: 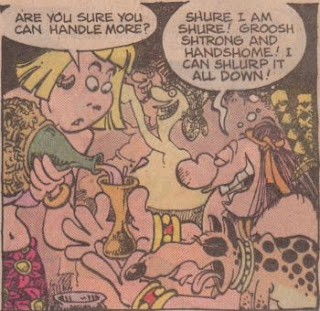 Sergio really gets a chance to cut loose with weird art here, giving the spider some personality when it gets drunk (look at those multiple sets of woozy eyes in the panel above), but making it monstrous and gross, with limbs spurting viscous ichor when severed and webs spraying out of disgusting orifices: 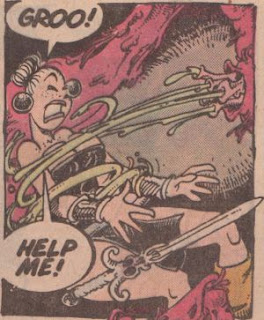 And I love the detail on display in the bone-filled lair, with a variety of weird shapes all piled together, creating an ominous atmosphere:

I also like his depiction of Chakaal, who, while skimply-clad, isn't one of the bimbos or wenches that often populate the background of the series, but a capable warrior, believable as somebody who could take on an army or a giant monster as well as the title character. In fact, while Groo is usually depicted cartoonishly, with limbs flailing about wildly, able to defeat all opponents more as a force of nature than of skill, Chakaal has a realistic physicality and a real sense of balance and motion as she fights: 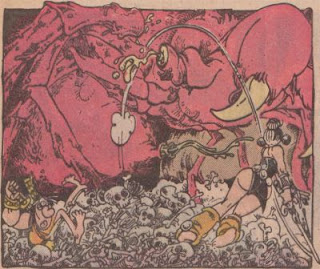 It's always impressive to watch Sergio work, and this issue is a pretty great example of just a few of the things he does so well. More, please.

This issue's stats:
Recurring characters: Chakaal, and the Groo-Grams header this month also has a bunch of guest stars:

Hidden message(s): It's written in a spider web in this panel: 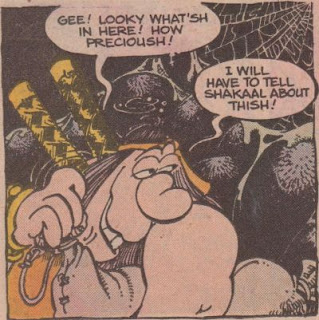 Moral: "Ignorance weaves a web from which none can escape."
Spanish words: Araña means "spider", of course, and the village of Tela is named after the word for "fabric". Groo gets drunk on alipuz, which is Mexican slang for an alcoholic beverage.
Running jokes: A drunken Groo laments that people call him "slow of mind", and when trying to recall something that he wanted to tell Chakaal, he thinks it might be "I am the Prince of Chichester."
Mark Evanier's job(s): Araneologist
Letter column jokes: Reader Kim Metzger angers Mark by suggesting that the Minstrel get his own spinoff comic. William Bussard writes a letter consisting only of the sentence "I am the Prince of Chichester!" which prompts Mark to reveal that the phrase was coined in an attempt to embarrass Daniel Chichester, the Associate Editor of Groo, as though being the Associate Editor of Groo was not already embarrassing enough. Tom Hutchins mentions stumbling across a late-night viewing of the Will Shriner Show which featured Sergio and asks if he was able to sneak a plug in for Groo. Mark says he did, which explains why the show was canceled. Herman "Hermit" Wilson writes that in order for Groo to meet Comic Book Barbarian Regulations, he must say "What manner of wizardry is this?!" or "You fiend!" (and "fiend" must be underlined with a wavy line). Mark says that he doesn't scare them, but this panel did show up in this issue: 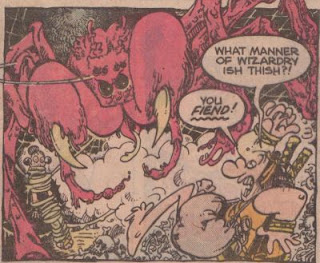