Many, many, minis: Depression, joy, love, sorrow; these run the whole gamut of emotion 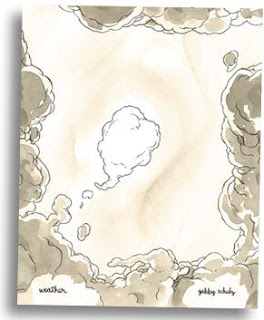 Gabby Schulz (a.k.a. Ken Dahl) is a cartoonist like no other, somehow able to depict the saddest, most cripplingly depressing events and make them not only hilarious, but also lyrically beautiful. This wordless comic depicts a schlubby fellow on a packed airplane in mid-flight as he stumbles to the lavatory in misery, flashing back to a consultation with a doctor in which he was unable to afford medical care, possibly for a life-threatening disease like cancer. His cares are briefly forgotten when he glances out a window and imagines himself flying gracefully through the clouds, naked and alone from all the miseries and humiliations of life. But, this being a Gabby Schulz comic, the horrors of human existence quickly intrude on his reverie in the most disgusting manner possible, bringing him right back down to muck-encrusted earth.

It's a short piece, fully in line with Schulz's style, featuring gorgeous cartooning, images both beautiful and disgusting, and a reminder of the awfulness of life, while still acknowledging the moments of beauty and wonder that make everything else worthwhile. There's nothing else like Schulz's comics, and that's probably a good thing; I don't know if I could take more than one of him.
----- 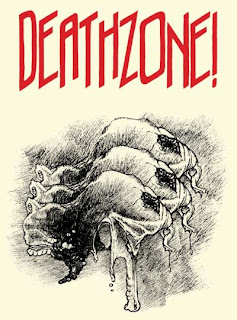 I know next to nothing about DC's Suicide Squad comics from the 80s, aside from the basic concept of villains pressed into government service and forced to undertake dangerous missions, but it seems to be pretty well-regarded among those who enjoy capes-and-tights stories, and this tribute by Michel Fiffe makes a good case for it. But it also provides Fiffe with a chance to riff on the visual styles of artists like Steve Ditko and just have fun with characters and concepts that he enjoys. He ostensibly retells a certain storyline in which the team fights a squad of terrorist supervillains, but it seems that at least the ending must have been changed from the original story. Whatever the case, it's obvious that Fiffe is having fun coming up with crazy depictions of superpowers, interesting confrontations between characters, occasionally shocking bits of violence, and neat visuals, especially once everyone gets sucked into another dimension and attacked by weird monsters. It's all pretty awesome, and probably more so if you're invested in the characters and their histories both together and apart, but just experiencing the palpable enjoyment that is radiating from the page makes the read worthwhile. Fans of Fiffe, Suicide Squad, and any overlap between the two shouldn't miss out on something this fun.
----- 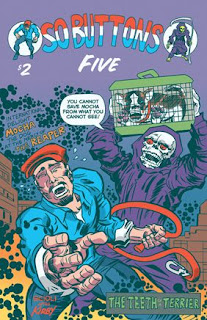 This issue of Jonathan Baylis' autobiographical series is a bit shorter (and cheaper) than usual, containing only four stories, but it's still a satisfying bite of decent little tales from Baylis' life, illustrated by a cadre of talented artists and embellished with an eye-catching cover by Tom Scioli. The stories include an amusing look at Baylis' fear of taking his dog to the vet, a depiction of his determination to recreate the coffee blend that his deli stopped selling, a sort of gag about the pressure-valve release of a shared joke following the emotional trauma of watching Schindler's List, and a cute story about trying to find the secret behind cooking the perfect brisket (a story which was also included in the Digestate anthology). As always, Baylis works with excellent artists who are perfectly suited for the mood of each individual tale, with highlights including Paul Westover's over-the-top exaggeration of Baylis' tears, Thomas Boatwright giving him cartoonish displays of anguish and stiff-jawed resolve, Noah Van Sciver's sort of thousand-yard-stare and the relief that humor can bring to it, and a perfect plop take by Lisa Rosalie Eisenberg. It's all as good one would expect from previous issues of the series, another chance to have a visit with a pal and hear some of his stories.
----- 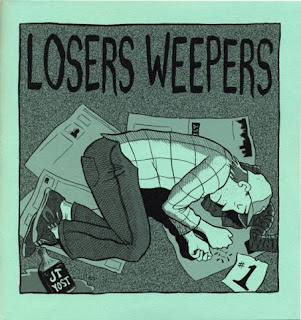 There's something fascinating about found notes, photos, and other such objects, as any reader of Found magazine knows, a glimpse into complete strangers' lives that offers tantalizing hints about the complexities of their personalities and situations, and a reminder that there are countless others surrounding us, each person as rich and deep as the rest of us. J.t. Yost apparently shares this fascination, crafting the stories in this series of minicomics into stories that could fit around various notes or letters that he had chanced upon.

Of the three extant issues (there is apparently one more to come at some point), the first is the most effective, taking a heartbreaking journal entry by a young woman who is contemplating breaking up with her unstable (due to a life of abuse and drugs and a traumatic brain injury) boyfriend, but worries what will happen to him if she does; and also incorporating some filthy rap lyrics scrawled on an envelope and a note from a junkie about borrowing some cocaine. Around these artifacts, Yost comes up with a sad tale in which the girl from the journal runs into her ex-boyfriend years later, her current happy relationship sending him into a spiral of drug use and despair. The other issues stretch a bit to incorporate humorous notes from schoolkids, poorly-worded bulletin board ads, and letters from prison into interrelated tales of woe, to the point that they seem unnecessarily miserablist, trying to wring pathos out of some basic building blocks that don't fully support it. But Yost is really just doing what most do when they encounter these bits of human ephemera, trying to imagine the stories behind them and see the humanity from this tiny glimpse into their lives. His approach, while fairly dark, is as valid as any, and it's neat to watch him spin characters and dramatic situations from these basic threads. Would that we all could be so eloquent when contemplating the drama unfolding around us.
----- 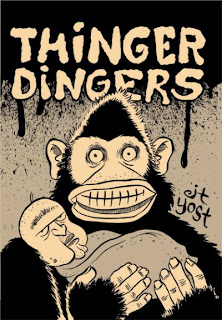 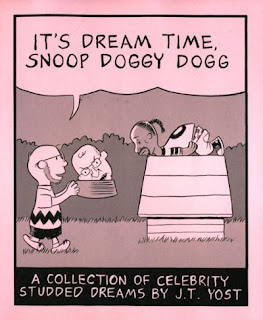 These two minis are more of a catch-all for J.T. Yost, with Thinger Dingers collecting various short comics that have appeared in anthologies or magazines, and It's Dream Time, Snoop Doggy Dogg featuring several dream comics similar to some Yost had done previously. One's mileage on the latter may vary, depending on tolerance for this sort of "Dude, I had the craziest dream last night!" narrative. Me, I like the surreal weirdness of Yost being at a party crashed by Snoop Dogg wearing a Richard Pryor mustache, carpooling with Dick Cheney and avoiding being poisoned by the former VP, Roseanne Barr being his mother for some reason, having his wife be stolen by Arnold Schwarzenneger, or running into Henry Rollins as a hot dog salesman. One could probably attempt to psychoanalyze these dreams, especially if they know Yost outside of the comics he makes (which I don't), but even outside of any consideration of their "meaning", they do a nice job of capturing of some of the bizarre stuff that our brains can get up to when we're sleeping. Yost's cartoony characters and celebrity caricatures work really well for the types of strangeness they're telling, somehow managing to make the emotions and interactions seem just on the far side of "normal". If you're open to this sort of thing, the comic is definitely worth a look.

As for Thinger Dingers, it's more of a "miscellaneous" collection, featuring stories both fictional and not, with the longest being "Ruemates", in which Yost relates tales of several bad roommates he's had to suffer over the years (and he doesn't let himself off the hook, noting that his weird taste in music and propensity for adopting stray cats doesn't make him the ideal living companion), including a drug-abusing porn star and a pretentious asshole who wouldn't let anyone else use his furniture for fear of "body oil contamination". There's also a funny two-page story about a friend's crazy hillbilly "alter-ego" that he would freak people with at parties, especially when drunk; a cute story about the lullabies Yost sings to his baby daughter; and a couple fictional stories about pigeon relationships and a badly-managed old-timey funeral parlor. It's a nice collection of Yost's work, the perfect use of the format to compile work that wouldn't really fit anywhere else. I really enjoy Yost's cute style and sense of humor, and the way he grounds his cartoony characters in realistic settings, making for down-to-earth looks at relatable human behavior. I'll be sure to keep my eye out for any future minis he releases into the wild.
-----

The Mire
By Becky Cloonan
Self-published 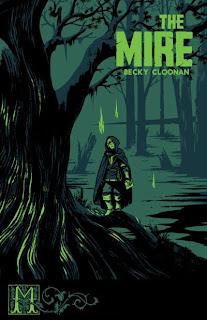 Becky Cloonan's minicomics are always a great chance to see her talent unleashed on something original. Not that there's anything wrong with her work on properties like Batman or Conan the Barbarian, but when she gets to devote her imagination to depicting beautiful, fantastical, mournful works like this, the results are so much more satisfying. This particular mini sees a medieval knight send his squire to deliver a message to a castle in the middle of a swamp that seems to be haunted. After some supernatural scares, the boy, who was lamenting the missed opportunity to join an impending battle, learns that his relationship with his master was much more complicated and, as a closing montage reveals, tragic, than he had ever realized. It's a sad tale that's visually arresting, featuring a distinctive silkscreened cover colored with an eerie green tint that enhances the creepy, moody art of the interior in the imagination; distinctively gruesome ghosts, and a beautifully sad ending. I wish Cloonan had the opportunity to create comics this this on a larger scale and more regular basis; as it is, I think these minicomics are an annual labor of love for her, and I'll be sure to go to whatever lengths necessary to read them as long as she keeps putting them out.
-----

The Stolen Lovelight
By Paul and Tara Abbamondi
Self-published 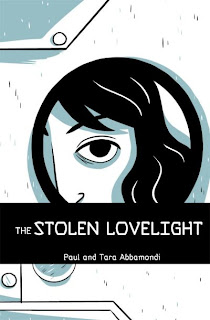 This minicomic by the husband-and-wife team Paul and Tara Abbamondi is a sort of sci-fi romance, and it's a bit slight, but the art is a nice example of a cartoony style reminiscent of someone like Faith Erin Hicks or Hope Larson, and there are some nicely creepy moments within. The story involves a woman who arranges her own kidnapping in order to escape the possessive jerk she was being forced to marry. But when she wakes up on the kidnappers' spaceship, she is all alone, aside from Doc, the robot left controlling the ship, an oddly attentive artificial intelligence that starts getting kind of creepy and calling her "lovelight" all the time. When M, the man she was trying to escape, shows up to "rescue" her, she learns Doc's disturbing secret and tries to escape. The ending is slightly unsatisfying, although it does attempt to demonstrate that love conquers all, which is a nice thought. As a whole, the story is a bit rushed, and I don't know if I fully understand what happened in the finale, but there are some really nice moments, like the initial kidnapping, the eerily empty ship, and the increasingly unsettling attitude Doc starts exhibiting. I do like Tara Abbamondi's art a lot, so she's a talent I'll be sure to keep an eye on. That's one of the great things about minicomics: discovering a new artist that you want to see more of.
Posted by Unknown at 6:00 PM