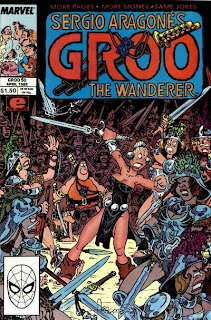 It's the big fiftieth anniversary issue, so it's time to (re)introduce another supporting character to the series: Chakaal, a tough, no-nonsense swordswoman who is kind of like a female version of Groo, only smart and competent. While one benefit of having recurring characters comes from seeing how Groo reacts to them , she makes for an interesting contrast to most everyone else, since Groo treats her with complete, lovestruck adoration, ignoring her loathing of him and following her like a puppy dog, barraging her with constant marriage proposals. On the other hand, Rufferto, having some competition for Groo's affections, hates her and agonizes over the possibility that Groo might marry her, give up the wandering life, and settle down to have children.

The story isn't about relationships though; while Chakaal's initial reaction to seeing Groo is to attempt to kill him, they end up teaming up to fight a band of battle-thong-wearing warrior women who are attacking the villages surrounding a nearby lake and kidnapping all the young women. Groo proves his usefulness when he disobey's Chakaal's orders not to interfere by rushing in to rescue her when she gets knocked out:

But it turns out he was screwing things up, as usual, since she was trying to get kidnapped and infiltrate their ranks. So he tags along as she continues to search for the villainesses' evil lair, and they soon discover that the evil ladies are using one of the cool fantasy concepts that Sergio tends to just casually toss into these stories: 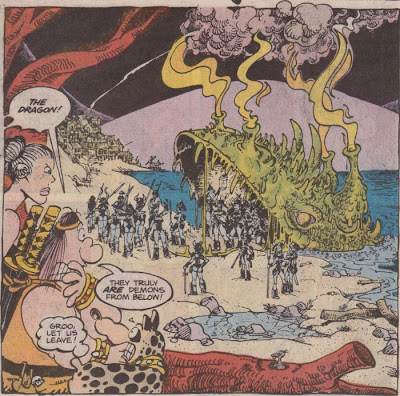 The dragon turns out to be artificial, an underwater vehicle used for transport into a lagoon hidden within an island in the middle of the lake, so Groo and Chakaal make their way inside for a rescue operation, which leads to some fun battles and great gags, as Groo either screws things up or accidentally does things to benefit the operation, like blowing a hole in the wall so they can escape. The whole thing makes for a good chance to see Groo interact with someone who barely tolerates him, and he manages to be hilariously obtuse and infuriating, doing things like abandoning Chakaal in the middle of a fight because he remembers that she wanted to be captured, or letting the evil warrioresses get away because Chakaal told him not to do anything until she said otherwise: 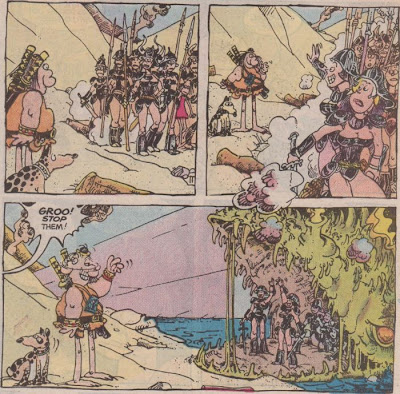 Or ruining the element of surprise for dubious reasons: 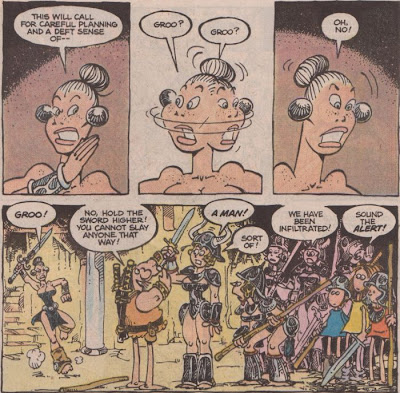 It all definitely makes for a fun episode of Groo's adventures, expanded to extra length for a milestone issue. And Chakaal will be hanging around for the next several issues, giving Groo a chance to be extra exasperating, hopefully in ways that will be more funny than tiresome.

This issue's stats:
Recurring characters: Chakaal (who, according to TV Tropes, is based on Sergio's wife, Charlene Ryan, at least in appearance). When Rufferto imagines Groo and Chakaal getting married, the wedding is attended by Taranto, Grooella, the Sage, the Minstrel, Arcadio, Granny Groo, Arba and Dakarba, Pal and Drumm, and Grativo. Also, you can see the Groo Crew up in the corner box on the cover.
Hidden message(s): It's written on the posts in the bottom right corner of this panel: 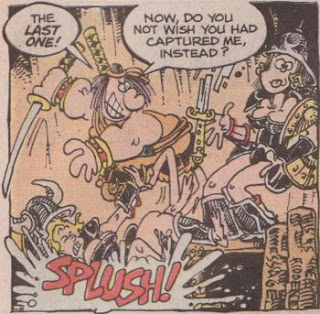 Moral: No moral this issue.
Spanish words: The evil warrior-women are called the Sirenas, after the Spanish word for "sirens".
Running jokes: Chakaal is disgusted by Groo's eating habits. Groo's constant marriage proposals to Chakaal are a running joke throughout this issue; we'll see if they continue through the next several.
Mark Evanier's job(s): Fiftiest
Letter column jokes: There are no letters this week; Mark spends the letter column sort of celebrating 50 issues of the series, but also making light of their talents by repeating the facetious claim that they keep telling the same jokes (a gag which even made it onto the cover of this issue), saying that "Sergio Aragones" is actually a "staff of overseas artists [using a] collective pseudonym...labor[ing] diligently, month in and month out...tracing old panels by Hal Foster and Alex Raymond, doing their darndest to fill up pages with something remotely resembling comics." He then states a desire to make "Groo" a verb, meaning "to commit an act of such incredible lack of brain power that it defies belief", and announces a monthly contest, in which a prize (a certificate autographed by Sergio and Mark) will be awarded to the person who sends in the best Grooism. I expect that would make for some enjoyable letter columns, but according to this post on the Groo mailing list by Mark, they never got around to making or sending the certificates. I'm not sure if that means the contest never happened, or just that nobody ever received a prize. I guess we'll see in a few months, when they would have started receiving entries...
Miscellaneous: I thought two of the ads in this issue were kind of hilarious. First, there's this phone-based RPG that seems downright dreadful, even if it has a great name: 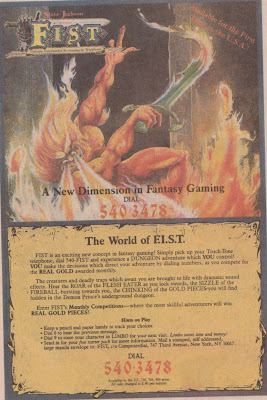 And then there's this John Elway football game that also looks kind of awful, but the facial expressions in the photocomic used to sell it crack me up: 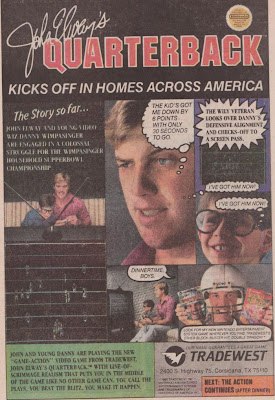