The Neverending Fray: War is hell (for some) 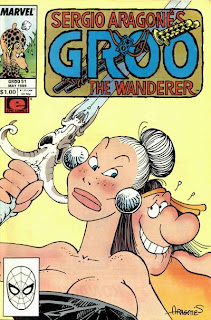 I think we're still a little ways from the point where the series starts to stray into social commentary more and more, but this issue seems at least a little bit directed against those who profit from senseless war (or just enjoy it, in Groo's case). Groo and Chakaal stumble across a village that is caught in the middle of two tribes which have been feuding for so long, they don't remember the reasons. In defense of the poor folks suffering the damage from all the fights, Chakaal decides to try to find a way to defeat the two tribes, and they come up with a plan to dam up a local river, summon the tribes to fight each other, then destroy the dam and flood the valley, killing everyone. That's kind of a bloodthirsty solution, but it turns out not to be necessary when the two tribes decide they've tired of endless war and want to seek peace. Groo sort of ruins it though, trying to impress Chakaal by delivering the messages to summon each tribe to the battlefield, insisting that they come fight even though they want peace, and then just slaying them all when they don't listen to him. This ends up accidentally resolving everything, but rather than doing the right thing for a change, Groo goes ahead and smashes the dam and floods the village anyway, making this the issue in which he probably racks up the biggest body count of the series. Hilarious!

There are some good jokes here, but I still find myself dissatisfied, mostly because I'm partial to stories in which Groo manages to help out the downtrodden rather than destroy them, and where the plans he inadvertently foils are those of evil schemers who suffer the brunt of his wrath, rather than just people who disagree with him. I do find the role that Chakaal plays in the story interesting; as an actual competent warrior, she lets Groo participate in standard heroic plots rather than acting as an ever-hated outcast. The problem, at least in the case of this issue, is that Groo ends up acting against her positive goals. He does end up spurring the plot toward the inevitable conclusion, since a dam can't be introduced in this comic without Groo eventually destroying it. Maybe that's an indication that the creative team was struggling against the confines of the world that they had created, but probably not, since they continued to find many, many ways to work within those confines over the years.

Whatever the case, we can still enjoy the fun parts of the issue, like this exchange between Groo and one of the tribes he is trying to convince to kill each other: 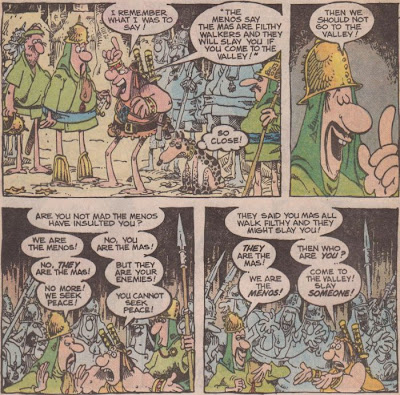 And I like the silhouetted action scene going on in the background of this panel:

This issue's stats:
Recurring characters: Chakaal, and also a gross old lady who was also in the last issue, describing herself as "a befuddled old woman, issuing incoherent but ultimately significant predictions," shows up again. Plus, Arba and Dakarba appear in the heading to Groo-Grams:

Hidden message(s): It's written in the markings on this tree trunk: 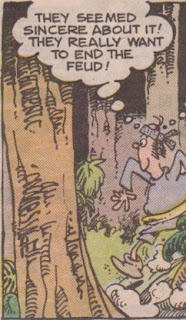 Moral: "None suffer so much in a war as those who strive to end it."
Spanish words: The warring tribes, the Mas and the Menos, mean "more" and "less".
Running jokes: Groo thinks to himself, "He takes me for the fool I am!" Later, when trying to remember a message he is supposed to deliver, he comes up with "I am the Prince of Chichester!" He also gets called a mendicant, and in the ensuing fight, Rufferto bites a guy on the ass.
Mark Evanier's job(s): Signetor (someone who seals things with a ring, presumably)
Letter column jokes: Reader Rik Hunik explains how his desire for a complete set of Groo comics means that he needs a second set, one to read and one to keep in mint condition. But when the first set wears out from being read too much, he'll need another, and another. So, since Mark says there isn't much difference between issues, he has ended up buying 20 or more copies of each issue. Mark says they did him a favor and printed the Statement of Ownership this month (average monthly sales: 96,205 copies, with the most recent issue selling 88,800 copies), so he can see how many copies he'll have to buy in order to own the full print run. Commenting further about the Statement of Ownership, Mark says it is easily the funniest thing they publish all year, and "When you someday find yourself owning Marvel--and don't worry, you'll all get your chance--you might want to consider letting us publish a monthly book of the Statement of Ownership." Mark also notes that The Groo Chronicles and the Groo poster are out, hints at a possible annual (which never happened), and says that the next Groo graphic novel, The Life of Groo, is coming at some point, but hopefully it "won't be color-separated by some fellow with a guide dog." I guess they weren't happy with how The Death of Groo turned out?
Posted by Unknown at 6:00 PM