The Neverending Fray: I'd prefer Tony Jaa or Jackie Chan 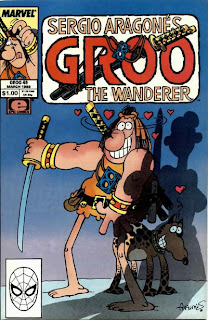 While the cover of this issue promises the return of a supporting character, that doesn't actually happen until an epilogue, after the main story has finished. She'll have to wait for next month; in the meantime, Groo begins to explore the new land he reached in the last issue, where nobody knows who he is, and finds work as a protector for a village that is regularly attacked by bandits. He initially gets praised for not being afraid of the "wolfmen":

But soon, they figure out various ways to get past him. First, they clean up their scruffy appearances so they look like regular villagers, a process which causes them great agony:

Then, when Groo has all the villagers wear red headbands to signify that they are not bandits, the bandits just adopt the same signifier and keep on pillaging the village while Groo is confused. Groo tries several different shibboleths, but none of them seem to work very well: 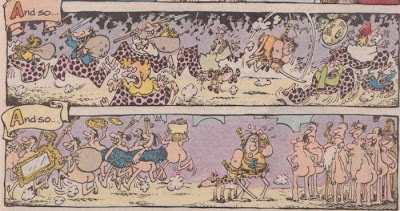 It's funny stuff, although it's less than ideal, in that the bandits win in the end, having completely looted the village of anything of value. If the issue hadn't contained the few pages of epilogue, there might have been room to include some sort of comeuppance for them; instead, Groo just wanders off, assuming success since the villagers aren't being attacked anymore.

There's plenty to enjoy here though, including tons of great details from Sergio, both of the sort that I always love in which people are going about their mundane lives, and of the funny mayhem that tends to ensue when Groo is around. Here's a good example of the latter; I especially like the way the bandits demonstrate that they're total jerks by one guy kicking a dog and another one (in the lower right corner) just stabbing some woman's goods:

There are some great battle scenes here too, especially when Groo can't tell who is a bandit and who is a villager and just decides to battle everybody: 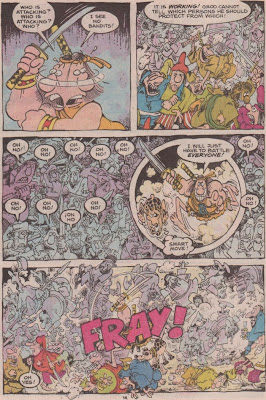 "FRAY!" is a great sound effect. And I love a good Sergio silhouette, like this one of the bandits laughing their way home with a haul of stolen goods:

While it might not be a perfect issue (which I'm learning is actually fairly rare, at least at this point in the series' run), there's plenty to enjoy here: great art, good laughs, Groo doing what he does best. You can't ask for much more (so please ignore that I just did anyway).

This issue's stats:
Recurring characters: Chakaal, who last appeared in the final issue of the Pacific series (which I don't have), appears, but only on the last page.
Hidden message(s): The decorations on this guy's clothes contain upside-down letters that can be arranged to spell "This is the hidden message": 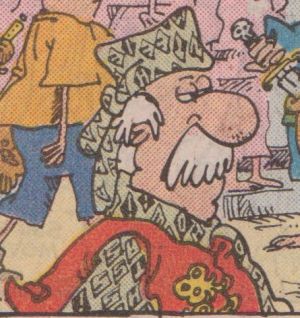 Also, the name of the bandits' leader, Nivram, is "Marvin" spelled backwards, which is probably a reference to a friend of Mark Evanier's or something. UPDATED: Commenter kipper informs us that Nivram the Wolf-Man is based on comics writer/editor Marv Wolfman. Neat!

Moral: "Protect yourself from those who would protect you from yourself." That's a good moral, but I don't know if it really applies here...
Spanish words: The town of Maringa might be named after a city in Brazil (which would be Portuguese rather than Spanish, but oh well).
Running jokes: Groo has terrible table manners and says "You take me for the fool I am!" Rufferto bites a couple of different guys on the ass. The regular insults directed toward the comic's readers extends from the letter page into this month's title page poem, which contains the following lines:


"But there's one crime of which
Our Groo must fairly be acquitted--
One foolish deed he hasn't done,
Which you have all committed.
It's something very foolish
Which does not speak well of you--
He's never spent his money
On a comic book of Groo."

Mark Evanier's job(s): Circumlocutionist
Letter column jokes: Mark leaves most of the humor up to the readers this month, printing several letters he doesn't understand or thinks are very strange. There's a tale by Yurko Slobodovich, who admires Groo and wishes to model his life after the Wanderer, in which he tried to withdraw all his kopins from the bank and, upon meeting resistance, shouted "When Yurko wants what he wants, Yurko gets what he gets!" and chased everyone from the bank. George Coventry thinks Groo is great, and even if he's stupid, "look at some of the people who pass as national leaders these days!" Politics were apparently no smarter back in the 80s than they are here in 2012, but Coventry also calls out television evangelists, which were a big concern at the time, due to their regular scandals. A fellow calling himself The Shadow sends in a letter to Santa which mostly consists of laughter interrupting a request for every issue of Groo. And Patrick J. Rummans confesses that he used the pseudonym Sergio Valentez for a letter which was printed in issue #39, and now that his Groo-obsessive friend Tim Ficke has found out, he's in trouble.
Miscellaneous: I like this drawing of Hulk Hogan in an ad for a WWF Wrestlemania Nintendo game: 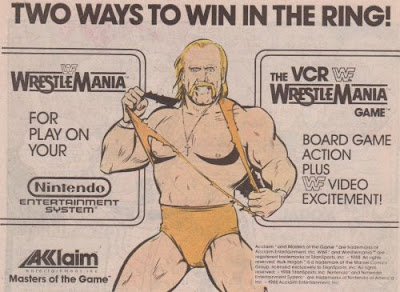