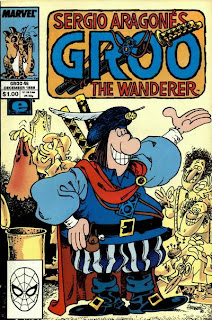 Having already detailed the origin of Groo's swords and Groo's dog, it was inevitable that some of his other personal effects would be highlighted. This issue doesn't reveal the background of Groo's distinctive orange tunic, but it at least addresses it, mostly through people pointing out how awful he smells. He certainly doesn't help the issue by carrying fish around under his shirt, sleeping in a pigpen, and only bathing every few weeks. Having learned of his garments' odor as a source of people's distaste for him, Groo spends the issue trying to acquire a new wardrobe, leading to all sorts of mistaken identity shenanigans after he steals the garb of different passers-by, then being gifted with the fancy new clothes seen on the issue's cover seemingly at random. But he ends up much where he started (minus at least some of the stench) after a slapstick encounter with some jerks leads to a fight in a fabric-dyeing shop that results in his new clothes looking exactly like his old ones.

It's a pretty good way to restore the status quo, but while it's somewhat expected, the journey there is pretty hilarious, giving Groo a chance to have funny encounters with a bunch of people and cause all manner of mayhem and destruction. I especially like when he is mistaken for a master builder and orders the workers constructing an arch to remove the supports: 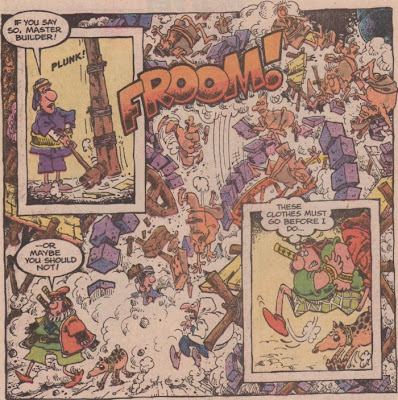 The way the guy so confidently follows instructions cracks me up, especially when juxtaposed with the massive chaos that is the immediate result. I also like the physicality of this gag: 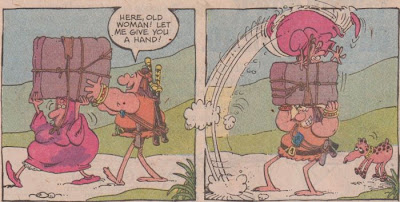 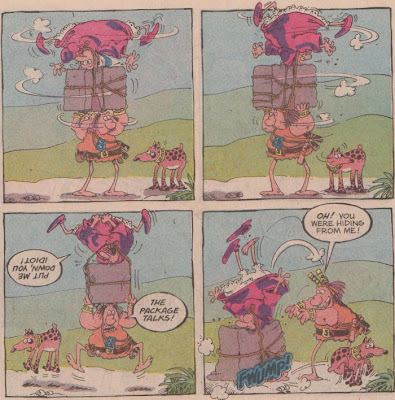 Yep, it's another pretty good issue, full of the usual violence, stupidity, and silliness. This could go on for quite some time without me ever growing tired of it. And it will.

This issue's stats:
Recurring characters: None.
Hidden message(s): It's written on the side of the burdens a couple of guys are loading onto a ship: 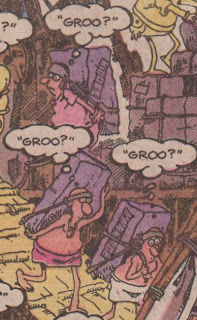 And, in what I suspect is a case of the creative team forgetting whether they put a hidden message in the issue and rushing to fit one in at the last moment, there's another one tucked in the corner of the final page: 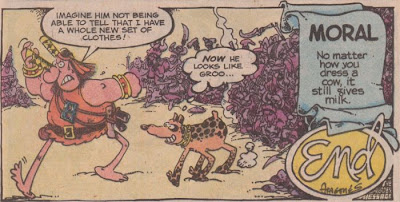 Moral: "No matter how you dress a cow, it still gives milk."
Spanish words: None.
Running jokes: Groo directly confronts his tendency to sink ships, with the expected results: 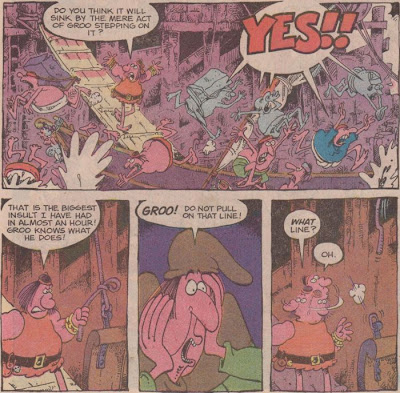 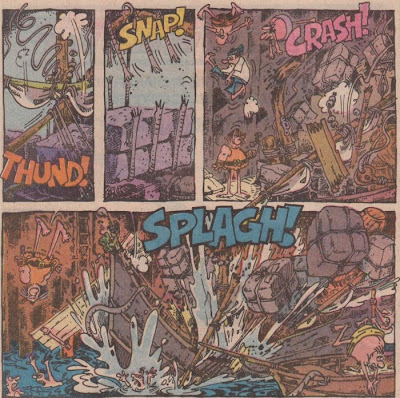 Mark Evanier's job(s): Haberdasher
Letter column jokes: Reader David Rickert begs Mark to reprint the pre-Marvel issues of Groo, so Mark pretends to be convinced, deciding to make the sacrifice of getting some extra money from forcing people to buy the issues again, on better paper and at a higher price, in the form of The Groo Chronicles. And in response to a straightforward, coherent letter from Jim Davie (which was really just somebody begging to have their letter printed), Mark prints one from Dan Wheeler that nonsensically accuses Mark of forgetting to call his own niece on his father's birthday, showing his face in Poughkeepsie, and going out with Juliet; then one from Tait Bergstrom which refuses to ask for free art, why Groo likes cheese dip, what Mark does, or the definition of mulch, and even to say anything about the comic at all, along with a maniacal laugh; then one from Jeff "LW" Lacasse that suggests replacing the mulch joke with one in which Mark repeatedly defines the word "carafe".
Posted by Unknown at 6:00 PM