The Neverending Fray: The gang's all here, for some reason 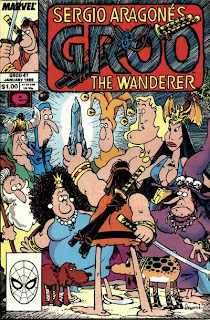 Here's another ensemble issue, one that gathers almost the entire supporting cast together (out of the "major" recurring characters, only Pal and Drumm are absent), but it kind of proves that the returns are diminished when so many players are crammed into the same story. Groo does get to play a major part of the plot though, following Arcadio along on a quest to obtain a valuable magic gem that is locked away in a tower filled with traps and guards. The Minstrel is there to sing Arcadio's praises, and everyone else shows up as the story goes along; Arcadio recruits Grooella so her army can lay siege to the tower, Groo runs into Taranto, who wants to come along and steal the gem, and, in one of the funnier moments of the story, Groo tries to figure out who can help him defeat some immaterial lizard soldiers: 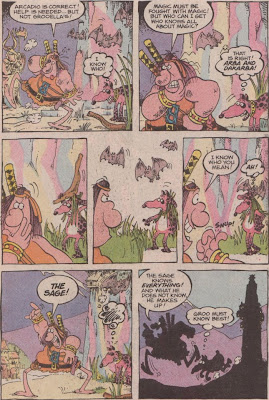 Arba and Dakarba end up being summoned to offer magical help, and they get Grativo to come along, in hopes that he'll restore their powers, but in the end, Groo is the one that does most all of the work, slaying all the guards and retrieving the gem, which just sets off a bunch of bickering between everyone, since Groo had promised each of them a 50% share. This all provides the main joke of the issue, and gives us the classic final page scene of everyone chasing Groo away in anger.

The main problem here, as tends to happen with the series' character-stuffed stories, is that with so much going on and so many players involved, there's not a lot of room for jokes. There are a few decent lines here and there (like Groo saying "I am off!" and the Sage replying, "Very much so"), and I like this example of Groo trying to figure something out: 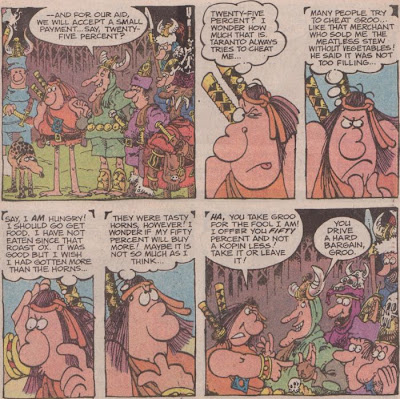 But the story itself ends up being an unsatisfying agglomeration of characters, most of whom don't really do anything or interact with Groo or each other in an interesting way.

We do at least get some nice fantasy images from Sergio. I'm especially fond of the splash page, with its nighttime scene of the tower and it's cool design: 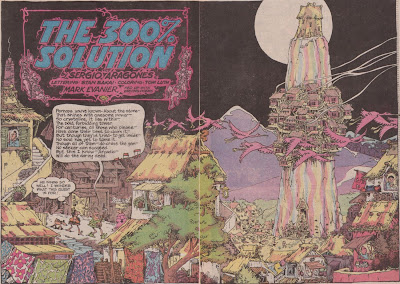 I think the Groo Crew eventually figured out how to incorporate all of the characters they had created, either by limiting them to appearing one or two at a time or by stretching the stories out to lengths of three or four issues to allow the plot to breathe a little. They appeared to still be getting the hang of it here. It's definitely interesting to see the world of the comic expand as it has over 50 issues or so, but now that it's pretty much fully formed, I'm looking forward to seeing it get refined to perfection. That will be fun to watch, even if there are more missteps like this one along the way.

This issue's stats:
Recurring characters: Almost everyone: Minstrel, Sage, Grooella, Grativo, Arba and Dakarba, Arcadio, and Taranto. Also, the members of the Groo Crew can be seen working away in their houses on the title page: 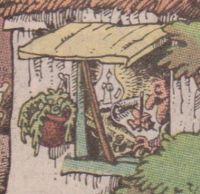 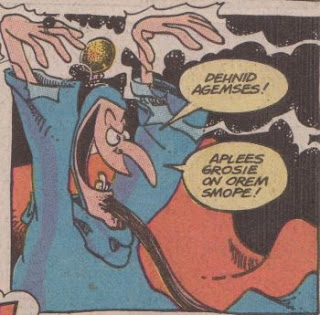 Moral: "What everyone wants, nobody gets. What nobody gets, everybody wants."
Spanish words: None.
Running jokes: I don't know if it counts as a joke, but every time Arcadio calls Groo his lackey, Rufferto retorts (if you can call it that when nobody hears him), "Groo is no lackey!" Groo recalls that he is the Prince of Chichester. I don't know if I've seen it before, but if not, this would be the first appearance of one of Groo's catchphrases: "You take Groo for the fool I am!" In mid-fray, Rufferto bites a guy on the ass.
Mark Evanier's job(s): Fed up with writing poems
Letter column jokes: Reader Mitch Warner asks about a possible hidden message in issue #32, saying that the phrase "Praise Megatheos" can be rearranged to spell "A ripe hot message". Mark says this was not intentional, but this reminds him to list the locations of the hidden messages in issues #27-42. Notably, he says the one written in binary code in issue #41 was Sergio's idea, which is why it was misspelled.
Posted by Unknown at 6:00 PM