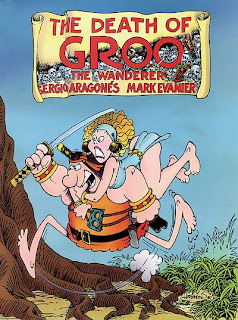 This was the first Groo graphic novel, taking a larger, thicker format than the regular issues, and being something of a "prestige" event, prefiguring the trend of comic book characters being killed off a few years later. Of course, Groo doesn't actually die here, but he is presumed dead, allowing for a funeral scene featuring all the regular guest stars. That always seemed to be as much the point of killing off Superman or some similar character: seeing how the supporting characters and the rest of the world around them reacts to such a loss. However, this being Groo, the event is a bit different, more celebratory than mournful. Luckily, he doesn't stay dead long enough to let anybody get comfortable in their relieved happiness.

But we're getting ahead of ourselves. The story itself (which was apparently written before Rufferto had been introduced, even though it came out in late 1987, after the dog had already joined the cast) sees Groo wandering into the kingdom of a man who hates him with a passion far beyond that of any previous character, to the point that he has servants whose sole task is to hate Groo, a job which often isn't performed as well as expected: 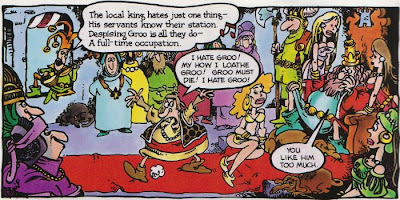 The revelation of the reason for the king's distaste of our favorite mendicant is amusing, since it was due to a fairly standard military screw-up, of the type that Groo has committed countless times, which makes for a nice acknowledgement of the irrationality of hate, as well as the belief of those in power that they are somehow more entitled than others, with a single lost battle being a grievous insult that the king bases his life around from that point forward.

So, when Groo stumbles obliviously into this land of ubiquitous wanted posters featuring his face, he is almost immediately attacked by reward-seekers, and when he runs away and right into the lair of a dragon called the Floom-Floom, he is quickly presumed dead. Anyone who knows anything about Groo should realize that he has survived countless such encounters, and his actual death would be much stupider and more outrageous and catastrophic, but being eager to please their king, the people report to him the death of his mortal enemy, which sparks off a wave of celebration across the land.

The ensuing funeral scene ends up being kind of hard to endure, as the only person who is actually sad is a barmaid who Groo defended from sexist patrons earlier in the story. Everyone else treats it as an event to mock the deceased, turning the eulogies into something more akin to a celebrity roast: 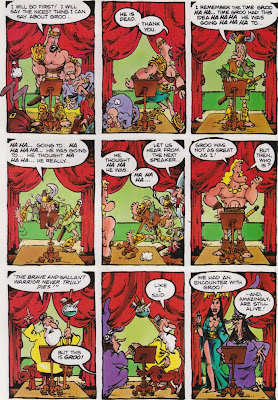 As one would expect, Groo gets the chance to attend his own funeral, and he is rather disheartened to see how much everyone hated him. This gives us one of the sadder panels in the series' history: 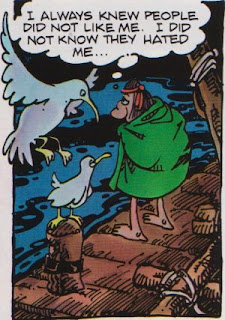 But it's not long before he gets back to his regular Groo-ish activities, deciding to make people miss him by donning a disguise (consisting of a poncho for a costume and some pig intestines as a mask) and acting as a villain in order to make the people realize they need a hero. He screws it up, of course, accidentally foiling crimes and rescuing people, and he quickly becomes the hero in death that he never was in life. Soon enough, the celebration of Groo's heroism leads to him being feted in the king's castle, and various silly circumstances (Groo gets mistaken for the king's barber, and he misplaces his clothes when taking a bath), along with the quickly-spreading rumors that Groo is still alive, lead to a rather satisfying comeuppance for the spiteful king: 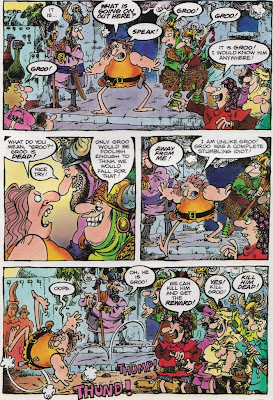 In the end, Groo gets to go on his way, secure in the knowledge that at least one person (the barmaid) appreciates him. Once Rufferto comes along, he'll have another, and that will be enough to keep him going even when many, many people want to kill him. That's all we need to get by, right? The Beatles said it best: "All you need is love."

As a Groo story, this is pretty enjoyable, and the fancy presentation makes for a nice chance to see Sergio's artwork in larger-than-normal size and on shiny paper that allows for bright, clear colors. Sergio also uses the increased page count as a chance to include more splash pages, so we get several images of battle scenes, giant dragons, and crowded celebrations; the detail-packed artwork really shines here. It's a lovely book, a good use of the format to tell a story in a way that couldn't necessarily be done in the regular monthly issues. That Groo Crew definitely knew what they were doing.

This issue's stats:
Recurring characters: The gang's all here: Sage, Minstrel, Taranto, Grooella, Pal and Drumm, Arba and Dakarba, Grativo, and Arcadio, and even the Witch of Kaan and King Kassabist. And the Groo Crew appears in the illuminated border of the title page: 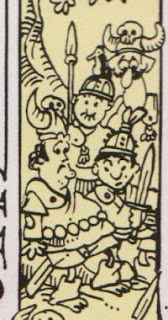 And also as one of the ever-transforming decorations on the Minstrel's lute: 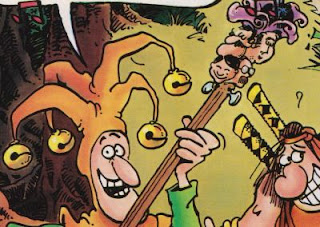 Hidden message(s): It's written upside down on the invites some of the characters receive to Groo's funeral: 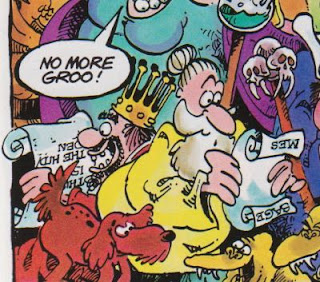 Moral: There's no "official" moral, but the Minstrel's final poem works in the same fashion:


"Where'er you go, you never know--
The reason someone hates you--
But folks as such--don't mean as much--
As who appreciates you!"

Spanish words: None.
Running jokes: The usual gags show up, like cheese dip, "Did I err?" and gross table manners, but the best variation on the regular jokes is when the ship supposedly bearing Groo's ashes (and, in secret, the actual Groo) seemingly demonstrates his ability to sink any ship, even from beyond the grave.
Mark Evanier's job(s): He actually gets a "written by" credit this time.
Letter column jokes: No letter column in this bad boy.
Posted by Unknown at 6:00 PM