The Neverending Fray: Dogs can have adventures too 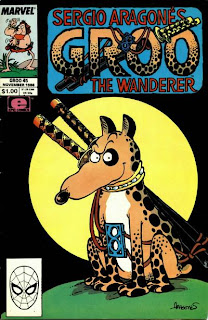 Last issue's fantasy about Rufferto must have bothered the creative team too, because this issue almost seems like a corrective to that, sending our doggie pal off on his own adventure without Groo and having him menaced at every turn, only to run away unheroically. It's kind of a funny idea, that without Groo around, Rufferto will just be constantly running for his life from dognappers, pirates, predators, and monsters. There are a few gags mixed into his constant fleeing, such as this lady who seems to have an interesting story: 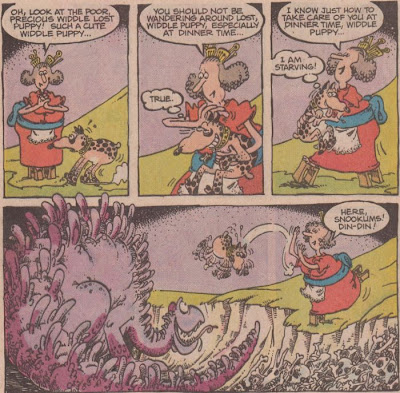 But it's mostly a bunch of well-drawn action/escape scenes, all leading to a nice variation on the usual "somebody chases Groo" ending. Meanwhile, Groo is stuck working at a mill that is operated by slaves (he signed up because he misunderstood what somebody meant when they said "the pay is nil"), having left his swords to be guarded by Rufferto. This leads to several funny bits, including a hilarious moment in which he tries to get fed: 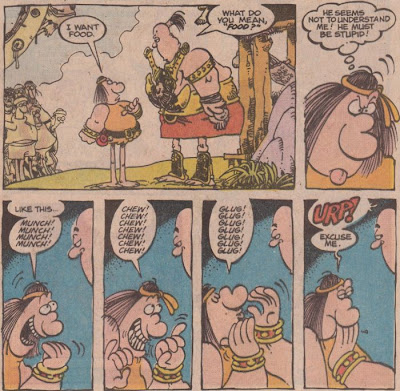 But once he gets his swords back, he gets a nice fight scene that's like a samurai duel: 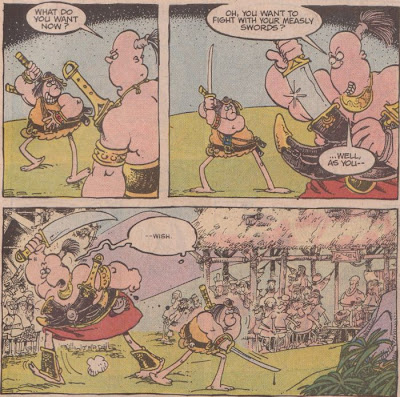 I also like the design of the mill, which appears to grind grain like a windmill, but instead of using wind to turn a wheel, it uses what looks like a big Ferris wheel that the workers turn by climbing like a ladder: 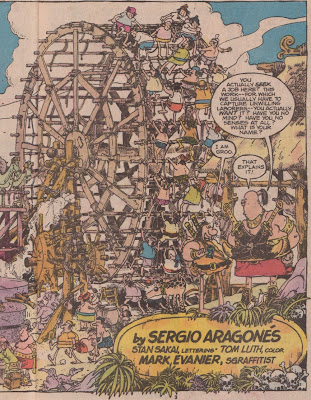 I don't know how effective that would be in real life, but it certainly looks cool.

Yep, this is another pretty good issue of the series, if a bit light on gags about frays, cheese dip, and mendicants. But there's always next issue for those.

This issue's stats:
Recurring characters: None.
Hidden message(s): It's barely visible in the thatching on this building's roof: 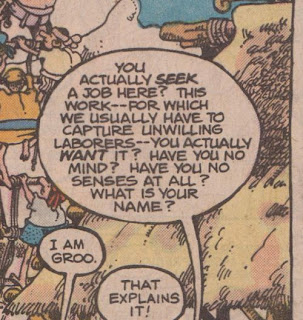 Moral: "Everyone's life seems easier from the outside."
Spanish words: None.
Running jokes: There's an occasional joke in which somebody calls Groo's name, and he responds "Who Grooed?" Well, this issue has a Rufferto variant: 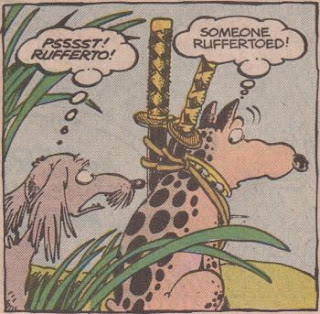 Groo also remembers that he is the Prince of Chichester.
Mark Evanier's job(s): Sgraffitist (a maker of sgraffito, presumably)
Letter column jokes: When reader Lon Wolf confesses that Groo's reunion with Rufferto in issue #39 made him cry, Mark responds by listing things that make the Groo Crew do the same: Stan Sakai's paycheck, Tom Luth's coloring duties, and long specials in which the Minstrel rhymes in every panel for Mark. Mark says there are 81 separate things that make the Groo Crew cry, then when another reader asks for the definition of mulch, he updates the number to 82. When reader Doug Green asks why Groo's nose looks like a jelly bean and Arcadio's chin looks like a cucumber, Mark responds that it's due to "the strange Jelly-Bean-and-Cucumber Diet that Sergio has been on for the last seven years." He's also allowed to eat black-eyed peas once a year, which explains the existence of Rufferto. Finally, when Benny Boucher sends a letter simply asking "Why?", Mark answers with a long, jargon-filled paragraph about how that question has plagued philosophers for years, before concluding "Because."
Posted by Unknown at 6:00 PM