The Neverending Fray: See, Groo didn't eat Rufferto after all 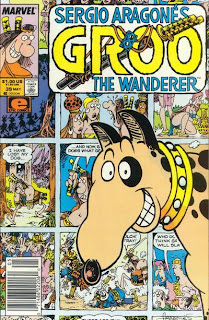 That's kind of a goofy cover; it seems to be acknowledging that Rufferto has permanently joined the cast, but the panels he's mugging in front of aren't connecting, instead seeming to stand in for moments in the issue's story (Groo crying about losing his dog and getting into fights, Pal and Drumm yelling at some guys). I do like the scene in the lower left though, with the guys making fun of the UPC box (or a picture of Spider-Man's mask, which is what's on my copy).

Anyway, in the issue itself, Groo is trying to move on with his life after losing Rufferto, attempting to convince himself that he has forgotten all about his beloved dog, but as a nicely subtle recurring gag shows, the canine keeps inserting himself into Groo's thoughts: 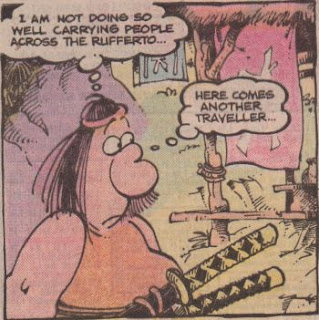 Meanwhile, the guys who kidnapped Rufferto run into Pal and Drumm, who promptly steal the dog, but they all realize that Rufferto's jeweled collar, which is still in Groo's possession, is needed in order to claim the reward for his return. They scheme to get the collar back, and this sets off a series of crazy events, which are complicated when Groo decides to replace Rufferto in his heart with the first dog he comes across, causing all the various parties to attempt to get their hands on the correct dog and the correct collar, all culminating in a scene of everyone sneaking around in the middle of the night (ably depicted by Sergio via his facility with expressive silhouettes), and an especially heartwarming reunion:

The issue has plenty of other enjoyable aspects, including a few scenes in which Groo tries (and fails) to earn money by carrying people across a river. He finds several ways to screw up, but I like this one, which incorporates the concerns of the issue's main plot: 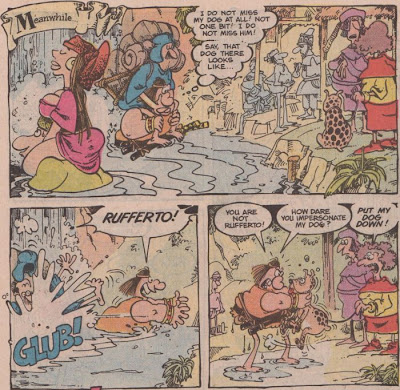 I was also amused by the other ferryman in the first panel, who is distracted by the burden resting atop his head.

In another fun moment, the kidnappers attempt to steal Groo's replacement dog while he's sleeping, with amusing results: 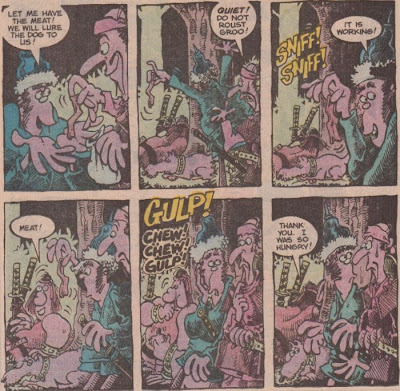 It all makes for a fun issue, one that cements Rufferto's place in the comic as something of a humanizing force for Groo. As dumb and prone to erring as Groo is, his life can seem like an endless succession of low points, but having someone who loves him no matter what adds a sort of audience surrogate to the comic, somebody who has affection for that most hated of individuals, someone who wants nothing more than to accompany him along on all his journeys, no matter how much trouble he gets in. Plus, it gives Groo a chance to act positively toward someone, rather than just following his own desires, which usually conflict with pretty much everyone else, even those who would seemingly share them. It's beneficial to the comic all around, and I wouldn't have it any other way.

This issue's stats:
Recurring characters: Pal and Drumm, and Rufferto's former owners make an appearance.
Hidden message(s): It's spelled out in the decorations on the shields carried by the warrior chicks standing around the credits on the title page: 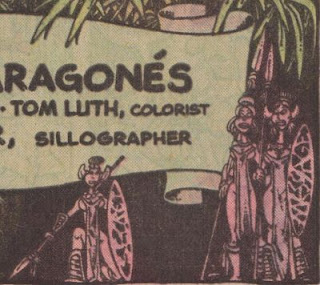 Moral: "The best thing about being apart is getting together again."
Spanish words: None.
Running jokes: This is the origin of the "What pirates?" gag that recurs in every Pal and Drumm appearance from here on out, with Drumm constantly bugging Pal about some pirates which the latter made up who supposedly kidnapped Rufferto. There's a mulch joke on the cover, being one of the words Groo is shouting out as he charges into battle in one of the panels.
Mark Evanier's job(s): Sillographer ("a writer of satires")
Letter column jokes: Reader Chris Mascotto asks what is so funny about mulch, since he only started reading the series with issue #22. Mark says there is absolutely nothing funny about it, but it's kinda funny that people keep writing in and asking about it. Later, when another reader asks him to define mulch, Mark suggests he write to Chris Mascotto for an explanation. Reader Bryan Povich says he doesn't understand why they keep publishing Groo, since it is only about laughs, and "that makes it a cartoon". He says he outgrew cartoons a long time ago and thinks they should too and move on to "real comics" like X-Men and New Mutants, which "show real people with real problems." Mark says they're even; he doesn't understand why they publish Groo, and they don't understand why he buys it. Finally, reader Sergio Valentez describes a friend named Tim Ficke who is so obsessed with Groo that he got a dog that looks like Rufferto, wears a headband, and is trying to find a Groo outfit. Mark replies that getting a dog that looks like Rufferto is not a good sign, but eyeing the dog hungrily is a worse sign.
Posted by Unknown at 6:00 PM