A Wrinkle in Time: Is this story that old? 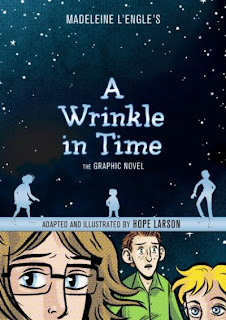 I read this novel years and years ago, but I had very little memory of it, aside from the explanation of the title, a plot point involving the little brother character, and a vague sense of odd pseudo-Christian stuff creeping in at the edges. Hope Larson's new adaptation of the book, which is coming out just in time for its fiftieth anniversary, makes for a good chance to revisit it and see how well it holds up, as well as how it fits into the current rich landscape of young adult literature. Regarding the former question, it seems to work well enough, creating well-drawn characters, immersing them in a fantastical world, and giving them goals that are both impossibly huge (fighting a universe-spanning evil force) and relatably intimate (rescuing their missing father). There are some interestingly strange concepts, including beneficial billion-year-old creatures who can manipulate time and space, a scary giant brain of a villain, and an evil black cloud entity of some sort that, in addition to spreading across and consuming the universe, is behind all the pain and suffering on Earth. The image of a planet where inhabitants are forced to adhere to restricting conformity is reminiscent of the threat of Communism that would have been pervasive at the time of the book's original creation, but it's still a powerful image, no matter the era. It's an interesting work of science fiction, with a spiritual emphasis on the power of love, which, depending on one's tolerance for that sort of touchy-feely stuff, lands somewhere in the middle of the spectrum of effectiveness between a powerful look at human emotion and a tiresome slog through sappy feelings.

As for the book's status alongside its modern-day peers, it does seem a bit old-fashioned, lacking the blistering pace and hormone-addled romance that the likes of The Hunger Games or Percy Jackson use to reel in readers. This story seems much more lackadaisacal, spending a good portion of the book introducing the awkward Meg Murry and her relationship with her family (especially her weird little brother Charles Wallace, who seems to be a super-genius and/or a leap forward in human evolution), then slowly revealing the three strange old ladies who live in a shack near their home before finally letting the space-traveling, evil-battling, father-rescuing plot kick in. And even when that gets going, a lot of it is spent enumerating the details of the worlds and aliens that Meg, Charles Wallace, and their friend Calvin encounter, with their eventual heroic rescue being something of a quest that the ultra-powerful fairy-godmother aliens send them on after pulling one of those "We can't interfere; this is something you have to do yourself" moves that ensures the protagonists are the heroes of the story rather than the advanced beings who seem like they could solve the universe's problems much more quickly and effectively.

All that said, the novel is a classic for a reason, and it's very effective at creating appealing characters and dropping them into a mind-boggling situation, then letting them use their wits and emotional strength to get out of it. What's at question here is how well Hope Larson can adapt this all to comics, and fortunately, she's a great match for the material, using her wispy, ethereal sensibilities to great effect. She makes Meg a believable, relatable teenage girl and fills out her home and family around her so well that the sudden journey to the cosmos makes for a surprising departure from the down-to-earth locales of the book's beginning. And once things are off and running, Larson comes up with effective ways to convey the disorientation of interdimensional travel, as well as the weirdness of alien worlds and the creepiness of the sterile planet Camazotz. It's lovely work, selling the basics of human interaction like Meg's feeling of teenage awkwardness or the way Charles Wallace seems a bit "off", but also conveying the characters' feelings of awe when confronted with the marvels of the universe and the terrifying scale of the evil they face.

It's a really nice-looking book; Larson has done a great job of bringing it to life in comics form, using a two-color palette that adds a cool blue tint to the black and white linework. For any long-time fans of the novel or readers who want to catch up with a well-regarded work of YA lit, this is a can't-miss prospect. Whatever reservations I may have about the religious elements that creep in or the sometimes antiquated approach to storytelling, the book overcomes them with pure strength of feeling, an investment in likeable characters who face a near-incomprehensible threat that becomes surmountable through the familial love that we can all (hopefully) understand. That's something worth experiencing, and with Larson's skill at graphic storytelling, it's great that this beloved work can find a new audience in a new medium.
Posted by Unknown at 2:01 PM