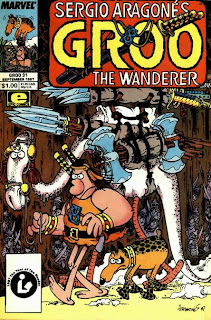 I'm continually impressed with the intricacy of the plots that the Groo Crew come up with, putting the character in a situation and then playing out as many permutations of it as possible, wringing hilarious jokes out of every variation on the theme. It's incredibly entertaining to watch, and even if you're not admiring the construction of the plots, you're kept quite busy laughing at the jokes. Is there any question why this is my favorite comic?

Anyway, this time, Groo has come into a little bit of money after the events of the previous issue, in which he managed to collect the reward for Rufferto (twice!) without actually returning the dog. So he naturally runs across someone hoping to trick him out of his money: the schemers, Pal and Drumm. They convince Groo to invest his money in weapons, and the local king gets in the act, planning to have him deliver some defective weapons to an outpost in the north of the kingdom, but hoping they will be stolen by rebels, making them easy to defeat. The rule of never basing plans around Groo holds steady here, as he manages to bumble his way into acquiring more weapons, buying and selling them several times over and increasing his money, and arming the rebels with working weapons and the king's soldiers with the defective ones. It's funny stuff, with moments like Groo getting mad a Pal and Drumm for somehow cheating him in a way that made him end up with more money, or having trouble figuring out which way he is supposed to go:

And there's no shortage of Groo-some chaos; even overloaded with weapons, he finds plenty of frays to fight (and Rufferto gets into the act, biting guys on the ass): 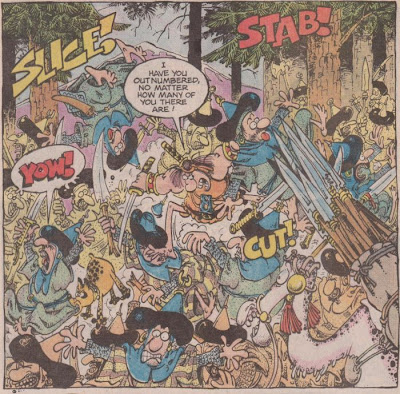 There's also plenty of opportunities for Sergio to fill pages with details, with this issue's title page being a great example of the destruction Groo can casually cause, just by crossing a bridge: 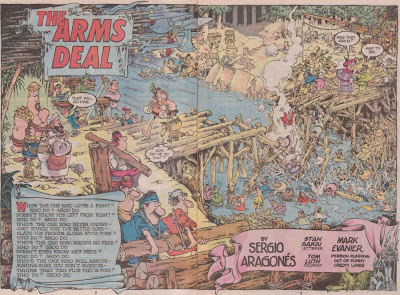 I love the way we join this scene just seconds after the accident happened, leaving exactly what Groo did up to the imagination, but the effects of his actions still taking place, getting worse and worse as the image continues to the right and standing in contrast to his casual stance, making his confusion over what exactly happened seem genuine. And just look at everything that's happening! People flying through the air, a log dropping directly on somebody's face, another log breaking over somebody's head, an apparently dead body floating in the water. It would be horrific if it wasn't so funny.

(Also note the topless ladies washing clothes upstream. I remember being scandalized as a kid when I noticed those dot-nipples in scenes like this.)

So, yep, this comic is still great. I'm surely getting redundant in saying that, but it's nice to be reminded of why I love this series so much with each issue that I reread. More to come, I'm sure.

This issue's stats:
Recurring characters: Pal and Drumm
Hidden message(s): I didn't find any traditional "This is the hidden message" type of message, but in this panel, you can see the word "Paz" (whatever that means) in the decorative carvings on the sheath of Pal's knife/sword: 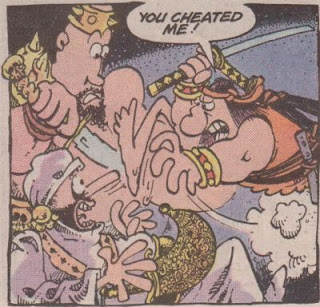 Moral: "When you deal in weapons, there are no winners...only losers."
Spanish words: The king of Maldad ("evil") doesn't really live up to his moniker.
Running jokes: Groo plans to buy two thousand kopins worth of cheese dip. Both Groo and Drumm get called "slow of mind", and they realize it fifteen pages later. Rufferto bites a guy on the ass. And there's a good mulch joke: 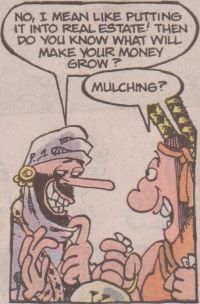 Mark Evanier's job(s): Person Running Out of Funny Credit Lines
Letter column jokes: One reader suggests changing the name of the letter column from Groo-Grams to Err Mail. When a reader asks why the price of the comic has risen to one dollar, Mark says that they had tried to keep the cost down as long as possible by recycling jokes and carefully avoiding using any new ones, but a new joke accidentally slipped in and that drove the price up. He defends the increase by saying "Do other comics give you Hidden Messages, cheese dip jokes, Groo poetry, snide letter columns, and frequent mentions of mulching? I think not." He also says the Groo Graphic Novel (a.k.a. The Death of Groo) will be out by Christmas of 1987, which means I should include it in these roundups soon.
Posted by Unknown at 6:00 PM