The Neverending Fray: Groo's approach to espionage is not very furtive 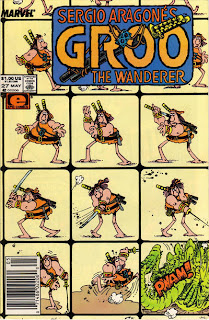 This issue combines the already-established tropes of having the Sage or the Minstrel tell a story about Groo by having them both do so, after meeting up with each other and being apprehended by an army that suspects they are spies. Their imminent execution prompts them to try to distract the soldiers by relating amusing anecdotes about Groo's attempts at espionage which are as funny as one would expect, given that he's not clever enough to deceive anyone, and he can't keep instructions or information straight long enough to deliver whatever intelligence he manages to acquire. He's also not good at keeping secrets:

The espionage angle also opens up the possibility for one of the most consistently entertaining Groo gag structures, that being that whoever tries to use Groo for their own benefit will end up being screwed in some fashion, whether they plan for him to succeed or fail in the instructions they give him. When he is found out as a spy, the kingdom he was spying on tries to feed him false intelligence. On his way to deliver the report, Groo runs into the Sage, who realizes that the people were lying and advises Groo to report the opposite of what they told him. This somehow leads Groo to verify the information, then report its opposite to the king he was spying for. And then after his leader is defeated, Groo, enraged, single-handedly defeats the army of the kingdom that lied to him, but can't convince the king to go claim the captured kingdom, since his intelligence is always wrong. It's a hilariously convoluted situation, but it makes for a perfect example of the way anybody and everybody who bases their plans around Groo are just setting themselves up for defeat.

In another story told by the Minstrel, a king sends Groo to deliver a message to his general, but the message carries incorrect information, since he expects Groo to fall into enemy hands. Groo manages to screw things up in multiple ways, first by changing the message when he fears the enemy will acquire it, then by managing to deliver the message anyway (while still letting the enemy see it), leading the various armies to run in opposite directions and never actually do any fighting. It's something of a change from the usual Groo stories; rather than ending in death and defeat, the victims of his stupidity are simply left at an impasse, unable to ever move forward, which is arguably a worse fate.

Interestingly, there is one exception to the rule that basing plans on Groo's actions leads to destruction: Sage and Minstrel, who manage to slip away when Groo attacks their captors for laughing at him. Perhaps those who aren't seeking personal gain (aside from simply staying alive) are immune from the effects of partnership with Groo, or maybe their status as supporting cast members is all that is needed to keep them alive.

On a side note, the title page poem of this issue is a bit of a departure from usual. Normally, these poems make some rhymes and jokes about the events of the issue, or just make fun of Groo, but this one is a bit meta, stepping out of the world of the comic as Mark complains about trying to write rhymes for the Minstrel and threatening to quit and leave the lyricism up to Sergio: 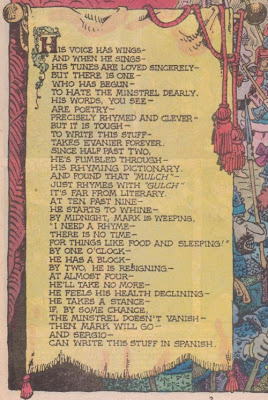 It's still funny though, so that's all that matters.

This issue's stats:
Recurring characters: Minstrel and Sage, and the Groo Crew (Sergio, Mark, Stan, and Tom) show up as soldiers menacing them: 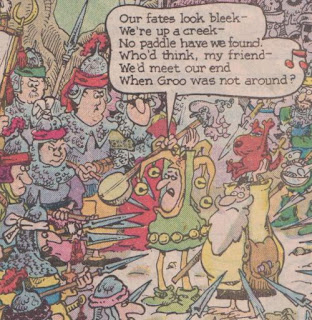 And since Minstrel's story takes place while Groo was in the army of King Kassabist from back in issue #1, Taranto can be seen as one of the king's advisors. Continuity!
Hidden message(s): It's written in the sand in this panel: 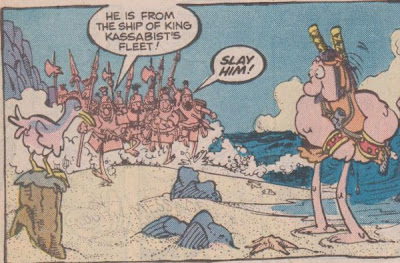 Moral: The moral for this issue is contained within a last-page song by the Minstrel, which says, "...you shouldn't laugh when those around you fail," which doesn't sound as good when it is separated from the rest of the lyrics.
Spanish words: General Medalla is named after the word for "medal".
Running jokes: There are five pages between the setup and payoff of the "What did he mean, 'slow of mind'?" gag. Groo can plainly see that he is carrying a secret message.
Mark Evanier's job(s): Bard
Letter column jokes: A question about the blue thing on Groo's chest leads Mark to clarify his earlier statement that it was a video cassette: the cassette is Beta, not VHS. Mark notes that this is the most common question they receive, with the second being "What is mulching?", the third being what the Sage's dog's name is, and the fourth being "Will Sergio send me a drawing of Groo?" He also notes that the Groo Graphic Novel is almost done, but "...there seem to be, uh, problems with the business folks, he said, putting it as nicely as possible." And then he describes where to find the hidden message in issues 13-18.
Posted by Unknown at 6:00 PM