The Neverending Fray: Money either is or isn't everything 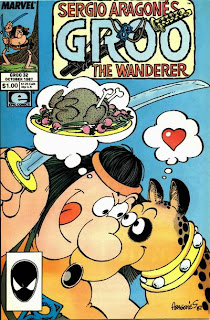 In the previous issue, Groo managed to acquire a great deal of money, which provides plenty of obvious opportunities for hilarity, and once further scene-setting establishes a town controlled by bankers who aren't willing to provide loans to the people, the hope for some class-based social commentary is raised. But while latter-day Groo stories might have jumped right into the social satire, this was still early enough in the series' run that the jokes are mostly limited to realizations of axioms regarding fools and their money. Luckily, those still make for plenty of funny stuff, like a scene where Groo comes across some bandits robbing a guy, but his arms are too full of moneybags to fight, so he leaves the money with the guy, only to have the guy try to run off while he is dispatching the robbers. This also leads to a nice involvement of Rufferto in the action, including an early example of the dog biting somebody on the ass: 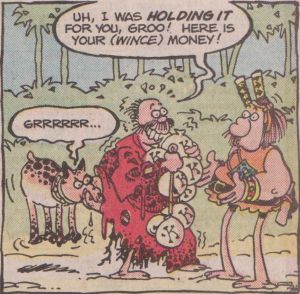 Having established the difficulty of Groo getting into mayhem while carrying lots of loot around, Sergio and Mark quickly find a way to divest him of his fortune by having him decide to give it to a bunch of monks to take care of, since they don't have anything better to do. After this, the comedy comes from everyone thinking Groo has the money. When he gets to the town with the bankers, people immediately start asking him for loans, but, in a typically Groo-ish misunderstanding, he thinks they are offering him jobs, and he agrees. Soon enough, most of the businesses in town have secured further loans from the bankers and are beginning to construct expansions and remodelings of their facilities, and its only a matter of time before the truth comes out and the system collapses entirely.

Following the financial collapses of the 21st century, this whole thing certainly seems prescient, but if there's any intended satire, it's more in the way people with money get treated differently. Since everyone has heard that he is rich, Groo is suddenly welcomed rather than spurned, and the bankers treat him with respect, saying "He has that special kind of wisdom of the rich!" Groo keeps thinking people's requests for money are offers of payment for work, and since they are so much he thinks, "I guess when you are rich, they figure they have to pay you more..." And later, when someone says that he won't have to do any work, he thinks, "I guess when you are rich, you even get paid for doing nothing!" It's wisdom from the mouths of fools.

All of the monetary wackiness is pretty entertaining, but the issue ends up concluding on a pretty bleak note, with the livelihood of the entire village in ruins. The more depressing endings of stories, in which people's lives are ruined just for having been in Groo's path, are the hardest ones to stomach in this series, although that might be the sharpest satire of all: life sucks, and then you die. But there is always some enjoyment to be had in the pages of the comic, with this issue providing a great example of a well-choreographed fight scene, and a nice use of the comics page: 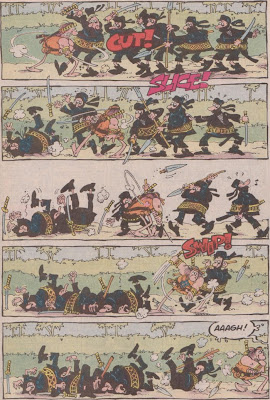 There are also some great reaction shots; I never tire of Groo staring at somebody in incomprehension: 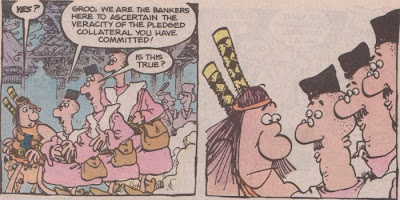 And I love the way everyone runs around screaming and waving their arms in a panic when they discover that Groo has no money and all their plans are based on a sham:

I think I might have mentioned this before, but Sergio Aragones is pretty great.

This issue's stats:
Recurring characters: The Sage, Taranto
Hidden message(s): It's written on the ends of this banker's scroll: 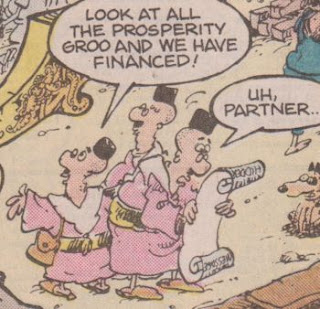 Moral: "Pretend money always leads to genuine grief." Jeez, that's great commentary on the current global financial situation...
Spanish words: Avara, a village full of bankers, means "stingy".
Running jokes: Groo wonders how much cheese dip he can buy with all his money. The "slow of mind" gap for this issue is only one page, but the twist is that this time, it is Groo who calls himself "slow of mind". Since Groo is rich, nobody minds his (and Rufferto's) disgusting table manners.
Mark Evanier's job(s): Logolept (a person who is obsessed with words)
Letter column jokes: No letters this month; instead, Mark mentions that half of the issue was colored by Janice Cohen instead of Tom Luth, and he claims Luth fled the country, and that they've sent people after him to bring him back. He also reveals the locations of all the hidden messages in issues #19-25, which will allow me to go back and updated any that I missed.
Posted by Unknown at 6:00 PM