The Neverending Fray: What pirates? 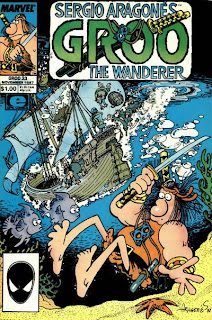 Pirates are a perfect subject matter for Sergio Aragones (he must have done "A MAD Look at Pirates" at some point, right?), and opportunity for him to draw all sorts of comic chaos, guys sporting lots of detailed bodily decorations attacking panicked victims with joyfully violent abandon. So throwing Groo into the middle of a piratical farce is an obvious plot for this series, and it works so well in this issue that it will show up again and again. In this version, it's also a great chance to use Groo's easily-misdirected energy to comic effect. When he decides to capture a band of pirates in order to earn a reward from a recently-pillaged village, he ends up in charge of the buccaneers after defeating their leader, then caught in the middle when he brings them back to take over the village he was originally supposed to defend. It's a pretty perfectly-structured issue, providing opportunities for the usual Groo gags of charging into battle, sinking ships, trying to make a confused decision, and ignoring his confusion to just join a fray.

Highlights include Groo charging off to attack the pirates as soon as he learns of the reward: 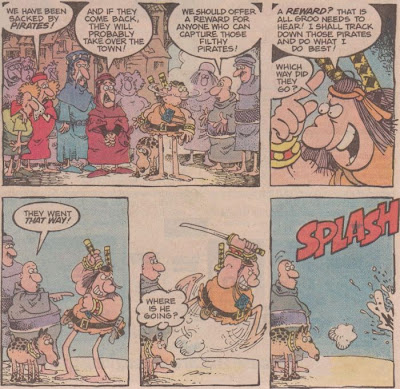 And a nice use of small panels to show Groo's process of trying to figure out what to do: 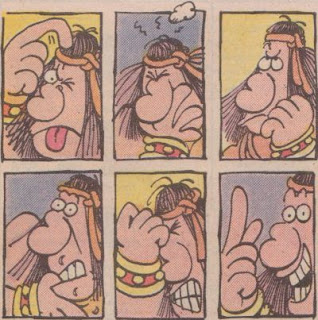 As well as an amusing pair of panels that see the pirates' leader quickly defeated with a combination of slapstick visuals and wordplay:

There are plenty of other nice gags, like the villagers repeatedly saying that things couldn't get worse for them, and then being proven wrong, or Groo's incomprehension when the pirates kick the villagers out of the village and take over, meaning that Groo can't attack them because they are now the villagers, but he also can't accept a reward because he didn't defend the village from the pirates. It's a great use of logic to confound the simpleton, until he decides to just ignore it and attack them anyway. And as usual, Sergio manages to make us feel sorry for the regular folks who get caught up in whatever shenanigans are going on; this panel of the villagers being kicked out of their home is kind of devastating: 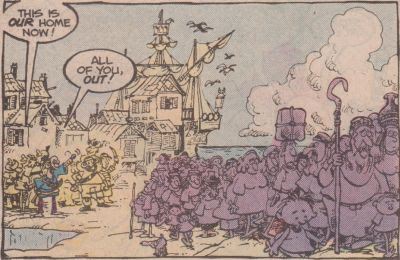 We might be able to laugh at all the ruination Groo brings to the land, but we still have some empathy for the common man, which manages to ground the series and provide relatable conflicts even among all the bloodletting, sacking, and pillaging. It's not an easy life for anybody; one almost wants to be as blissfully ignorant as Groo; he sure seems to enjoy his life. I know I do.

This issue's stats:
Recurring characters: None.
Hidden message(s): This issue has one on the cover, spelled out upside down in the sand at the bottom of the ocean:

There's also one on the inside, written in the decorations on this guy's helmet: 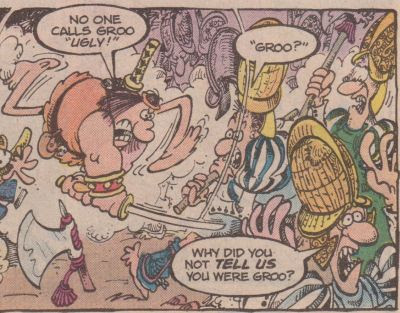 Moral: "Be careful when you take one side or the other. You could wind up in the middle."
Spanish words: The village of Peralvillo is named after a neighborhood in Mexico City. While this isn't Spanish, the pirates of Salgari are apparently named after the nineteenth-century Italian author Emilio Salgari, who wrote multiple series of books about pirates.
Running jokes: At this point in the series, Groo's affection for Rufferto hadn't fully developed, and it seems like there will be at least one joke per issue for a while about him planning to eat the dog at some point. Here, he tosses Rufferto off a boat so none of the pirates will eat him first. Groo's tendency to sink ships is a central plot point, and this issue establishes the opposing force of Rufferto's luckiness, which keeps ships afloat as long as he is on board. Groo's table manners fit right in among the pirates. The "slow of mind" gap for this issue is only one page, but the twist is that this time, it is Groo who calls himself "slow of mind".
Mark Evanier's job(s): Engastrimyth (ventriloquist)
Letter column jokes: Mark says that soldiers in this series wear ornate ankle protectors because "their armies all hold contest and give out big cash prizes for the most unusual tan lines." When one reader asks about where to find issues that he doesn't have, Mark says he can just read other issues over again, since "they're all pretty much the same." He also confirms that Rufferto will be sticking around, even though he was originally intended to only be featured in a few issues, but even his creators grew to like him and decided to keep him around (unless Groo eats him). And this issue's "What did she mean, 'slow of mind'?" gag made its way into the letter page, with the first letter asking if Groo is really slow of mind and Mark using the familiar phrase to close out the column. I love the way the series' running jokes make their way back and forth from the comics to the letter column; that's pretty unique.
Posted by Unknown at 6:00 PM