The Neverending Fray: How much is that doggie with the moron? 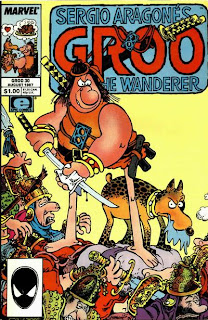 The last issue's cover didn't have any hint of the new addition to the cast, but this one seems to indicate the opposite, that Rufferto has joined Groo in his wanderings and frays. That's not quite the case, though; like the three-parter that introduced Grooella, this story seems to be stretching out over a few issues to make the addition of a canine sidekick more believable, which might seem like a surprise for a silly comedy comic, but fits right into the modus operandi of the thoughtfully detailed approach this series takes to its hilarity.

While the previous issue was dedicated to Rufferto's growing admiration of Groo (who responded with plans to eat the poor mutt), this one sees Groo slowly coming around to reciprocating the feeling. He spends most of the issue trying to return the dog to his owners and claim the reward, which leads to a series of madcap chases and, when the always-scheming Taranto gets involved, various plans to steal him from Groo and/or cheat the owners out of the reward money. Groo gives away Rufferto, gets him back, attacks people, chases others, and when he finally manages to claim the reward, realizes that he misses the loyal pup. The next issue presumably cements their relationship, forever enshrining a companion into the lore of the dimwitted wanderer, one who loves the bumbling mendicant as much as we do.

As ever, there is plenty of excellently entertaining material here, such as an opening scene that sees Groo wander into a huge battle and not even notice it due to his preoccupation with returning Rufferto and getting a reward. But everyone else notices, and they all freeze, leading to a hilarious series of panels in which the oblivious force of nature wanders along with everyone watching: 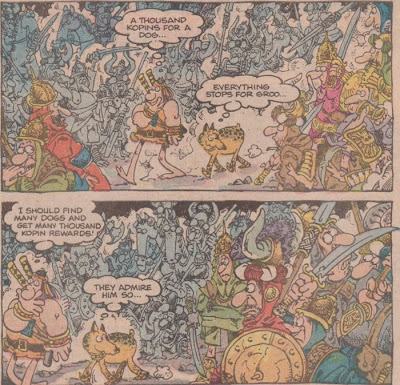 I love the way Sergio conveys how everyone has halted in mid-action. What is the difference between this and a scene of hundreds of soldiers fighting? There's a lack of motion lines, for one thing, but the wide-eyed expressions on everyone's faces are what really sells the air of petrified fear, and everyone's posture manages to look awkward and stiff, and as the scene proceeds, they shift from being frozen in mid-motion to just standing around and wondering what Groo is going to do. It's really quite impressive.

Another scene sees Groo searching far and wide for Rufferto's owner, and it's funny in almost an opposite manner, shifting from one massively detailed location to a series of far-ranging settings, with the diversity of the random subjects Groo is questioning emphasizing the arbitrary nature of his search (also: nudity!): 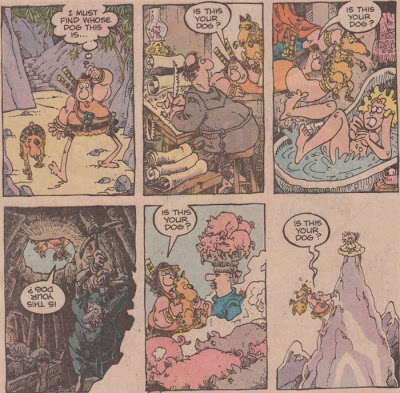 The rest of the issue is fairly standard Groo material, wringing every bit of humor it can out of Groo's tendency to go off half-cocked, Taranto's attempts to play the situation to his advantage (and his obliviousness to the greater treasure, Rufferto's jeweled collar, sitting right under his nose), and everyone else learning the folly of getting in Groo's way. There's one especially funny moment, in which Groo corners one of Taranto's henchmen, that definitely made me laugh, being both an example of Groo's counter-intuitive thinking and the futility of trying to guess what he's going to do: 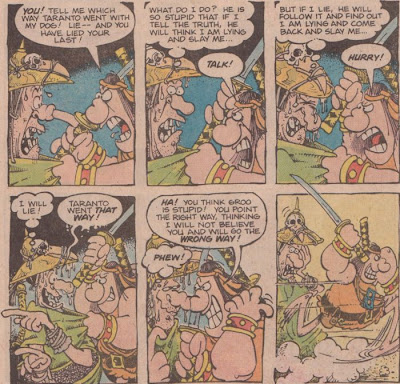 This is funny stuff, as one would expect, and now that the regular cast of the series is complete, it should be smooth sailing from here on out. Until Groo sinks us, that is.

This issue's stats:
Recurring characters: Rufferto has joined the regular cast, so there's no need to mention him here, but his owners make another appearance, as does Taranto. And there's another appearance of the Groo Crew (minus Tom Luth, I think) tucked away in the corner of a battle scene: 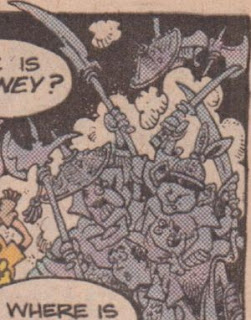 I like the Usagi Yojimbo ears on Stan Sakai's helmet.

Hidden message(s): The markings on these guys' bandannas spells out "This is the hidden message" over the course of the panels: 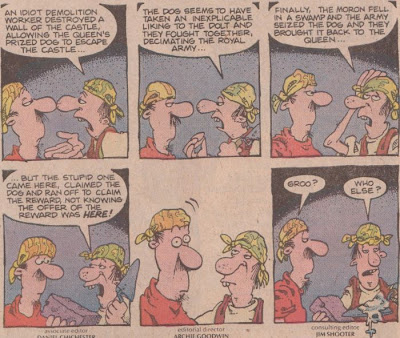 Moral: "Honesty is its own reward. Dishonesty is its own punishment."
Spanish words: None.
Running jokes: This issue, there are "only" twelve pages between the setup and punchline of the "What did you mean, 'slow of mind'?" gag. Groo doesn't get called a mendicant, but he does get called a scaramouch, with the same results.
Mark Evanier's job(s): Deobscurant
Letter column jokes: This column consists of some fairly standard sarcasm, including nonsensical answers to dumb questions (What is the name of a dragon that appeared in an issue? Sid. What is the stick Grooella carries with her face on the end? It's a Sibling Sapling). When asked if Sergio has the same build as Groo (huge upper body, skinny legs), Mark says he is actually three feet tall and weighs 600 pounds, and the mustachioed guy at conventions is a guy they hired and trained. He also jokes that his title keeps changing because he can't hold a job for very long.
Posted by Unknown at 6:00 PM