The Neverending Fray: Again with the wishes 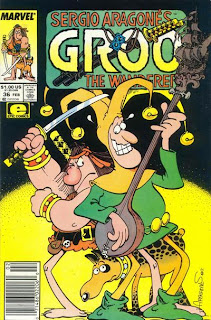 This issue picks up right where the previous one left off, and it continues to milk the large guest cast by having Groo grant them wishes (using the magic amulet he has in his possession), but somehow managing to make things worse when doing so. He sends Sage back to the mountaintop he froze on last issue, and Taranto and his goons get transported to a room full of treasure that happens to be a king's locked vault. This does provide the opportunity for a Scrooge McDuck reference:

Arcadio was about to slay his thousandth dragon, so Groo sends him to fight 1,000 dragons, which gives Sergio a chance to draw a cool collection of giant lizards: 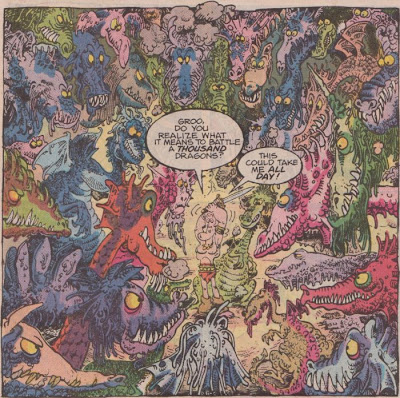 Most poignantly, Groo wishes that the Minstrel would stop rhyming in order to escape having to hear the constant insults that come from describing his actions, but while this initially makes Groo happy, when he realizes that he has taken away his friend's purpose and the thing that gives his life meaning, he decides he has to rectify his mistake. Of course, doing so won't be easy, since he inadvertently gave the amulet to Arba and Dakarba, but he wants to do the right thing, so he heads off to win it right back. And after various shenanigans involving Grativo being turned into different animals, Groo gets the amulet back, undoes the worst of his wishes, and, frustrated by his inability to get wishes right, wishes the amulet did not exist and solves everyone's problems: 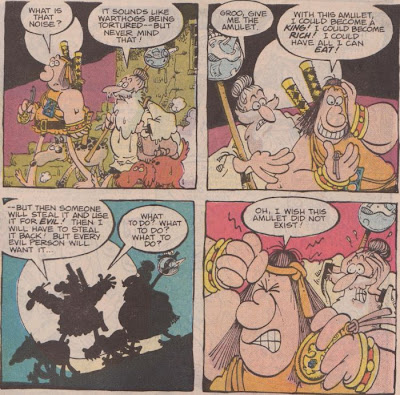 It's the perfect ending to this series of madcap events, a situation that lets Groo do something right for once, even if he thinks he screwed up. As an ending that does something other than having everyone chasing Groo with murderous intent or having him about to wander into a death trap, it's pretty much ideal. And the issue makes better use of a host of guest stars too, giving everyone something unique to do (except Pal and Drumm, who just disappear between scenes) and highlighting their different ways of interacting with the title character. Yep, it looks like the creative team is finally figuring out how to use their ever-expanding cast, either one at a time or all at once. I look forward to seeing more.

This issue's stats:
Recurring characters: The same group of all the regular supporting players is still here: Sage, Taranto, Grativo, Arba and Dakarba, the Minstrel, Arcadio, Pal and Drumm, and Grooella. The Groo Crew (Sergio, Mark, Stan Sakai, and Tom Luth) are also hanging around in the background, as can be seen in the panel below.
Hidden message(s): It is contained within the Sage's loud exclamation here: 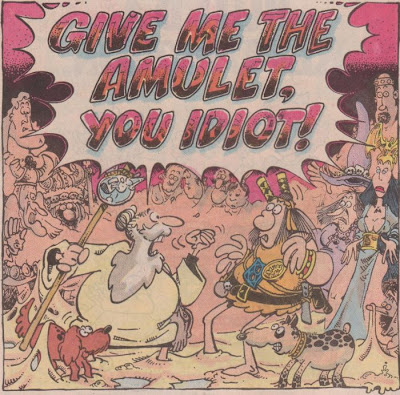 Moral: No moral this month, although it does get a replacement of sorts in a song from the Minstrel.
Spanish words: None
Running jokes: More of the cheese dip from last issue. Groo not only says "Did I err?", but he also complains that Minstrel always sings about his erring. There are two "What did you mean, 'slow of mind'?" gags, one in response to a statement made a month ago, and one involving the Groo duplicate that Arba and Dakarba created.
Mark Evanier's job(s): Logastellus (a person whose enthusiasm for words outstrips his knowledge of them)
Letter column jokes: The final poem from Steven W. Ebner is printed here, after Mark sent him a postcard begging him to stop sending poems. Mark also plugs an episode of CBS Storybreak called "Mamma Don't Allow" that he wrote and wrote songs for.
Posted by Unknown at 6:00 PM