The Neverending Fray: It's doggie time 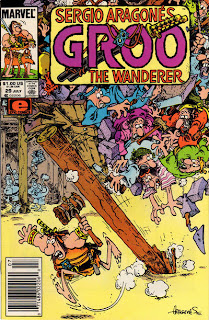 For such an important issue, one that establishes what is essentially a second lead for the series, there's no indication of such on the cover. Instead, it's a sort of condensation of the opening gag, which sees Groo, while working on a demolition crew (which provides an opportunity for a good joke, as the supervisor says, "Knowing Groo, I am afraid he will accidentally build something!"), cause a ton of chaos by destroying the wrong building. This sets off a chain of events by freeing a dog who belonged to a pair of rich people, with said dog, a spotted fellow named Rufferto, coming into contact with Groo and immediately falling in love with him. The affection isn't reciprocated though, at least at first; Groo is more interested in eating the dog than keeping him as a pet. The mutual affection will grow later, but for now, we see Rufferto (who, in the manner of most animals in this series, is anthropomorphized to the extent that we are privy to his thoughts) become more and more taken with his new hero, misinterpreting Groo's actions as protective of the dog and marveling at his fighting skill, while explaining his tendency to join battles and attack everyone regardless of their side as done for a reason "too complicated for me to understand."

The issue is dedicated to introducing Rufferto to Groo (and to us), but it also establishes the dog as a loyal canine companion, one who worships his master and can't help but interpret his every action as heroic. What's even more impressive is that it does this while sharing the dog's thought process with us, and makes it believable and funny. Rufferto could just be a mindless animal who decides to follow Groo, but by letting us hear his thoughts and understand the reasoning behind the affection, we recognize that manner that dogs have of loving their masters unconditionally, and we also identify with him as the only other being in this world who likes to spend time with such a colossal screw-up. It's a masterstroke of "casting", the perfect addition to the world that humanizes Groo just a bit more, gives him somebody to play off of besides the "beneficiaries" of his attempts to help or hurt, and provides some positivity and affection for a character who spends so much time being reviled.

As for the events of the issue itself, there's plenty to enjoy, including some good lines from Groo: 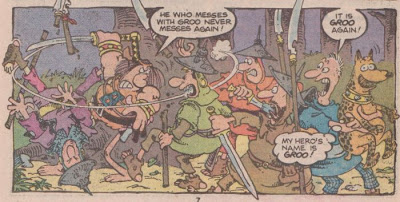 And the usual excellent visual gags from Sergio, like this panel of a bunch of people seeking the reward for finding Rufferto (I like the guy waving a bunch of bones around the best): 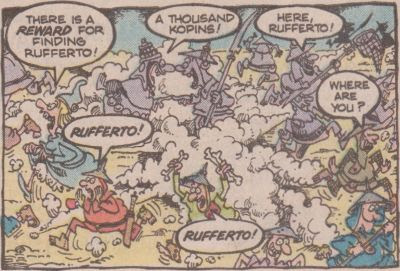 He also gives Rufferto so much personality that one can't help but want to see more of the character. He has the usual doggie mannerisms, but he occasionally adopts human-like poses and expressions, making him a perfect blend of wild animal and relatable being: 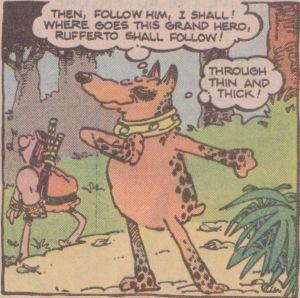 And I also wanted to point out a particular panel that is rendered in stark black and white silhouettes, a technique Sergio must have done in the series before this point, but not so strikingly that I took note:

I love how much detail is recognizable even when the scene is rendered so simply, and the way the only spots of color are in the sound effects makes them really stand out and highlights the funny violence of the fight. Man, Sergio never stops impressing me with his work on this series. More, please.

This issue's stats:
Recurring characters: Rufferto makes his debut, and so do his never-named owners, who will show up from time to time to try to get him (and his jeweled collar) back. We also see the Groo Crew as members of the owners' army, and Stan Sakai even gets a line:

Hidden message(s): Groo carries a reward poster for Rufferto that contains a message he can't read: 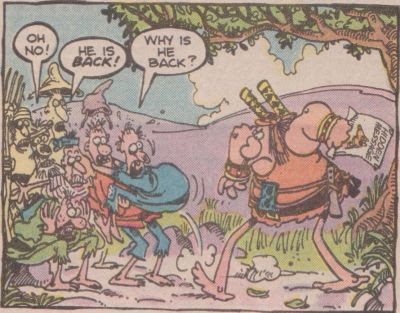 Moral: "Everyone is somebody's hero."
Spanish words: Rufferto isn't really a Spanish word, but it's a play on a Spanish-sounding name like Roberto.
Running jokes: This issue's gap between the setup and punchline of the "What did that man mean, 'slow of mind'?" gag is fifteen pages.
Mark Evanier's job(s): Trainer
Letter column jokes: Fairly standard stuff this issue, with Mark joking about the comic's gags being unfunny and disparaging Groo fans. He also answers a question about why his job keeps changing by saying that "if Stephen King wrote the way I did, he'd have to change jobs every month."
Posted by Unknown at 6:00 PM