The Neverending Fray: Only the 1% get to eat well 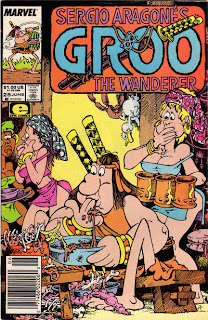 This issue seems to set up a class-based conflict, sending Groo into a land where the kings eat well and the people starve, but it ends up just having our "hero" get involved in food-based conflicts with said monarchs, rather than making any statements about society (outside of acknowledging that economic disparity exists). That sort of thing would have to wait, but what happens in this issue is arguably a lot more fun, with Groo just trying to get a good meal to eat, then setting out on a quest to find a cook for one of the kings. There are plenty of good gags, a lot of them pertaining to Groo's repeated failure to locate a suitable chef, as he leads the king's man to people living in caves who only eat bats or almost gets him served as a meal in a village of cannibals. He eventually finds a great cook, but sparks a war between the kings in a dinner scene which, had it played out a page or two longer, could have led to an awesome food fight.

The real indicator of quality in a Groo comic is whether it is funny, and this one certainly meets that standard, featuring several bits that I literally laughed out loud at. My favorite might have been this scene: 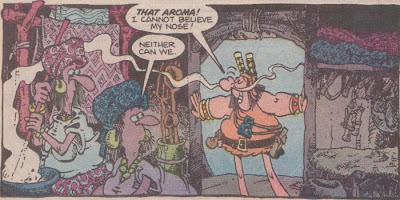 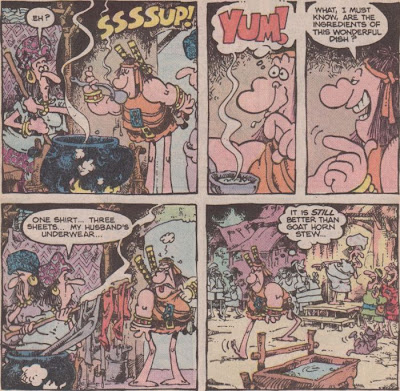 But there are plenty of other bits that were at least chuckle-inducing, such as this bit: 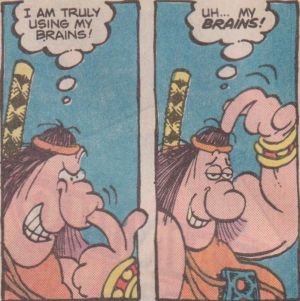 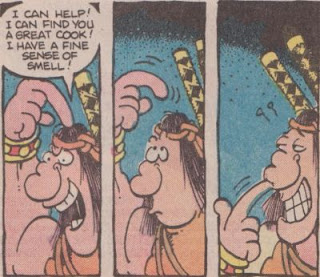 For a good visual gag, although I found the setup to it (in which Groo rejects some gross goat horn stew because it isn't as good as the delicious food he had been smelling) somewhat unbelievable, this moment amuses me: 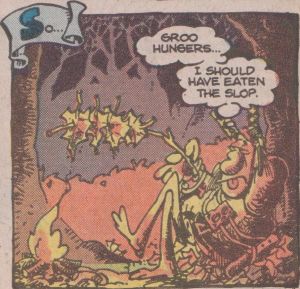 And I always like a scene of Groo gobbling down food and people looking on in disgust:

And look, here's a bit of Sergio playing with the format of comics, as one of his anthropomorphic animals (which are always kind of disturbing when they are about to be killed and eaten) fights for its life by grabbing on to the edge of a panel: 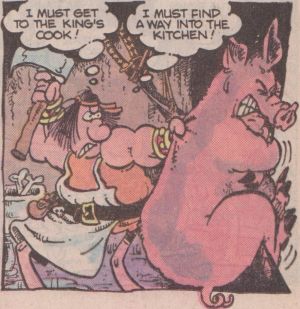 But what I especially dug about the issue is how well Sergio's art emphasizes the life of the common man. The background details of the regular people just trying to get by are one of my favorite aspects of this series, which might be why I get disappointed when an opportunity to spotlight them in their struggles against oppressive rulers is presented and ignored. But I can always get hints of all the activity going on around Groo in scenes like the title page spread of this issue, which sees some guys loading stone blocks onto a cart (I love the half-bored expression and posture of the driver), people carrying stuff up and down stairs, and a woman sitting in her house sewing (Sergio even drew a thimble on her finger): 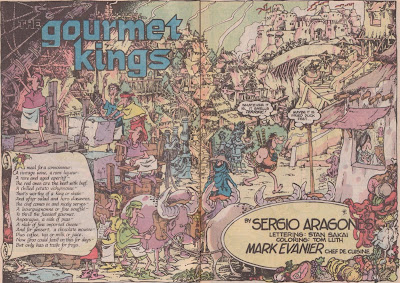 As fun and hilarious as Groo's adventures are, the depth of the world around him makes the series so much richer. He's not getting up to his antics in a vacuum; he's affecting the lives of many people who are just struggling to survive, and that ends up providing more to think about than the funny ways in which he kills people. Man, I do love this comic.

Hidden message(s): In this panel, taking the first letter of each of the labels of the jars of spices on the second and third shelves spells out "secret message": 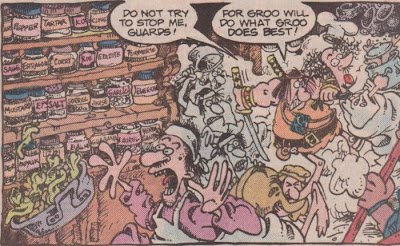 Moral: "The way to a man's heart is through his stomach--a route which takes you nowhere near his brain."
Spanish words: The kings and kingdoms are named after meals or food, including Almuerzo ("lunch" or "dinner"), Merienda ("picnic"), and Sopa ("soup"). There's also a butcher named Cerdo ("pork"), and a fat woman is named Pompas ("bubbles").
Running jokes: Mentions of cheese dip and mulch (I thought they didn't do that joke anymore?). It takes a full ten pages for the "What do you mean, 'slow of mind'?" gag to pay off this time. I hope this gap eventually stretches out to multi-issue length. In something of a reversal, Groo, after briefly succeeding, asks "I did not err?" and gets the reply of "Not yet!" (don't worry, he does). He also responds to being called inept by saying that he is "non-inept", which, not being as funny as saying he is "ept," might mean that this joke is on its way out.
Mark Evanier's job(s): Chef de Cuisine
Letter column jokes: Brent Anderson writes to say that he likes all the killing, maiming, and death in the Groo comics. Mark recommends that he check out Strikeforce: Morituri, but doesn't think he'll like the artwork, which was done by "a drop-out from a remedial drafting class at the Escondido School for the Hopelessly Bewildered." Another reader asks what Mark does, "besides transilluminating, dehaveraling, and reading comic books", and Mark says that he writes sneaky, underhanded plugs for comics drawn by Brent Anderson. A reader named Barry Bell complains that his letters never get printed, and after noting that he and Sergio read all the letters and really appreciate them, even if they can't print them all, says that their mail room has standing orders to throw away any letters from Barry Bell. Answering the next letter, which asks how they pick which letters get printed, Mark says they go through them all, throw out any asking for sketches from Sergio, any wanting to know what "mulching" means, any asking about Sage's dog's name or the blue thing on Groo's chest, and any from Barry Bell. He says "This process leaves us with about nine letters. We then pull out all the ones that are intelligent, incisive, crisply-written, and filled with perceptive commentary. Once we get rid of them, we print what's left."
Non-Groo content: Rereading these old issues, I've often found the ads and the editorial content from Marvel pretty enjoyable and interesting, but haven't seen anything worth pointing out...until now! Check out this ad for the skateboarding movie Thrashin', starring a young Josh Brolin: 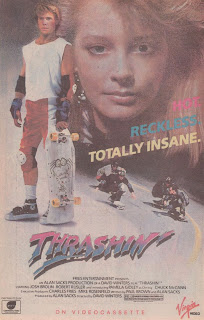