Comix Canon Club: Horrors of a supernatural and carnal nature

This is the third post in a series looking at notable stories to be found within The Graphic Canon, volume 1.

The Book of Revelation
By Rick Geary

Rick Geary's version of the visions of St. John is pretty great, a straightforward, literal, deadpan treatment of the "prophecy" that could be interpreted as either the ravings of a madman, or an attempt to imagine the horrors of the end of the world. Either way, Geary makes it entertaining, whether he's detailing weird visions like Jesus as a seven-eyed, seven-horned lamb:

Or making the servants of God, who have just received seals on their foreheads, look like grinning simpletons:

Like the original text itself, it's a non-stop parade of freaky imagery that demonstrates the power of the lingering imagery that originated here, such as the whore of Babylon, the four horsemen of the apocalypse, and the mark of the beast, while surrounding it with all the related strangeness that overwhelms the "vision" and turns it into ridiculous (if entertaining) religious nonsense.
-----

This is a nice little nested set of stories from Arabian Nights, in which a fisherman catches a bottle and is threatened by the genie that comes out, then tricks it back into the bottle and tells it a story, in which another character tells a story, and there's even sort of another story within that one. It's kind of goofy, but Andrice Arp details it with some really nice cartooning, and a well-done formal conceit in which the panels of the stories-within-stories get progressively smaller, then return to the original size when the action returns to the original players:

It's really well done, a great interpretation of a classic, and a really nice example of Arp's cartooning skill. Her work definitely deserves more exposure.
-----

For a completely different interpretation of an Arabian Nights story, this bit of grotesquerie from Canadian artist Vicki Nerino takes an already bawdy story (about a woman getting permission from her husband to sleep with a stable boy by claiming that her mother bequeathed her vagina to her daughter, and the second "coynte" needs its own husband) and makes it downright nasty, turning the characters into subhuman homunculi, lingering on gross details, and giving everything a scribbly, splattery, sickly, dirty feel: 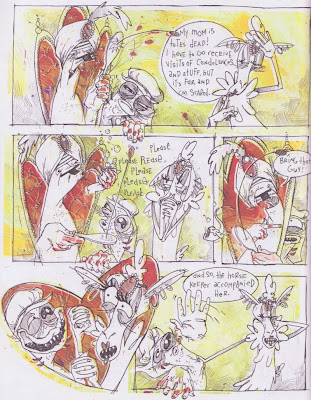 She updates the language into a silly post-millenial patois as well, including terms like "totes", "whatevs", and "OMG", which makes the whole thing that much funnier. It's a riot, one hell of an inspired adaptation, and another case of this book providing exposure to an artist that deserves further consideration.
Posted by Unknown at 11:48 PM