This is the fifth post in a series looking at notable stories to be found within The Graphic Canon, volume 1.

I don't really get this poem, which is based on the Biblical characters David and Bathsheba, from a play by George Peele, but the imagery that Dave Morice uses to adapt it is striking as hell, composed of stark black and white bars that radiate from the pages like rays of the sun. Even without color, they turn every panel into a searingly bright assault on the eyes. It's a crazy, cool effect: 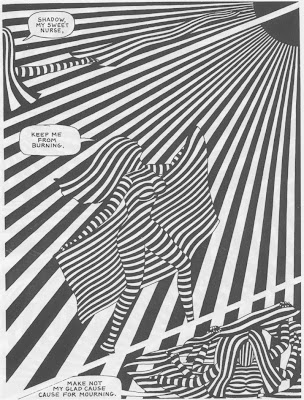 This adaptation of one of Shakespeare's most famous poems ("Shall I compare thee to a summer's day?") by the creators of Ulysses "Seen" is one of the most moving adaptations of the original I've ever read, the kind of recontextualizing of the words that works perfectly and casts the complimentary praise of the poem in a different light, managing in just a few pages to evoke fully realized characters and some real emotions. It's something that comics can do so well, and it's done so skillfully here that Berry and Levitas have immediately become creators I want to read more work from. Apologies for a vague description, but this is a comic that needs to be experienced in full, and it's worth seeking out The Graphic Canon if only for this.
-----

"The Flea"
By Noah Patrick Pfarr 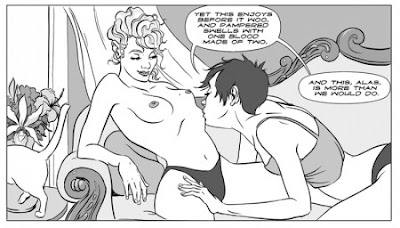 Email ThisBlogThis!Share to TwitterShare to FacebookShare to Pinterest
Labels: comics, The Graphic Canon